Sabyrs are a race of Creatures of Grimm resembling Saber-toothed cats from the American animated webseries RWBY.

Like other Grimm, Sabyrs were created by the God of Darkness in an attempt to rid the world of life, and remained even after he and the God of Light abandoned Remnant.

After Team RWBY, Jaune Arc, Nora Valkyrie, Lie Ren, Qrow Branwen, Oscar Pine, and Maria Calavera arrive in Atlas, they meet up with Maria's friend Pietro. However, before he can help them, the city is attacked by a pack of Sabyrs that begin rampaging through the streets, destroying Atlesian Knight patrols. The heroes rush into battle and begin cutting them down, working together to take on several at once and saving each other from the Grimm's attacks. As they are finishing fighting, a laser beam comes from the sky and destroys the last of the Sabyrs. The origin is revealed to be Penny Polendina, who has been rebuilt since her destruction during the Fall of Beacon. As she reunites with her friends, the city is suddenly attacked again in a different location, and Penny flies off to save it.

Later, Sabyrs are among the Grimm that Teams RWBY and JNR fight off in their daily Huntsman and Huntress duties.

After Arthur Watts shuts off Mantle's heat and security systems, causing panic, Sabyrs are among the Grimm rampaging through the city, attacking civilians. Jaune and Ren fight them off, and are helped when Vine Zeki holds them back to allow Jaune and Ren to escort civilians to safety.

Ice Sabyrs appear as units in RWBY: Amity Arena. They are melee ground units that only target structures, and deal cold damage to surrounding enemy units upon death. They also appear as a part of the Wyvern unit; the Wyvern will fly over the battlefield, dealing damage to all enemy units that it flies over, then drops an Ice Sabyr as a quick ground melee unit.

Sabyrs are incredibly fast and agile, capable of leaping large distances as well as several feet into the air. They use their claws and fangs, especially their long maxillary canine teeth, in battle in attempts to bite at and shred down their prey. They travel in large packs, and are also easily capable of destroying Atlesian Knights. 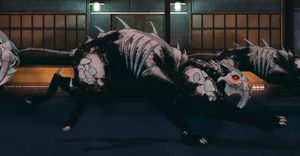 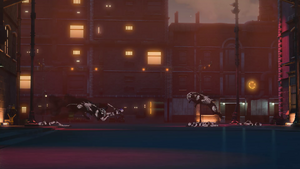 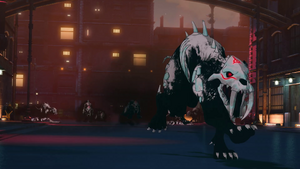 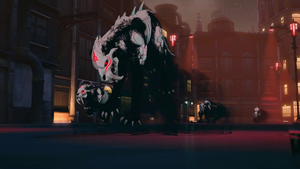 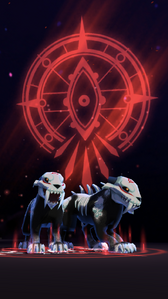 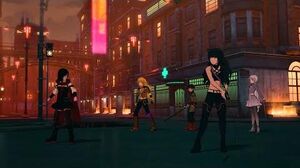