Price of God
Covering of GodFourth Angel (Rebuild of Evangelion)

Cause the Second Impact

Sachiel is the Third Angel, and the first to appear in the fifteen years since Second Impact. He was the first angel to almost cause the second impact due to the inexperienced Shinji Ikari piloting the Eva unit he fought, and he also was the first angel of the original anime Neon Genesis Evangelion, and in the remake of the anime Rebuild of Evangelion as well.

Sachiel is a spindly, amphibious humanoid Angel slightly larger than an Evangelion. The Angel has an unusually lanky physique and exaggerated proportions, arms reaching below the knees, and elongated shins and feet, with the impression of leg length furthered by the absence of a head and neck. Like other humanoid Angels, Sachiel possesses a core located in the solar plexus region. Both of Sachiel's faces- the initial long-beaked one and the short-beaked one that grows after the N² mine attack, are made of ossified material and shaped like a bird skull, the long beaked face being capable of limited mobility. Sachiel has eyes with red irises deep within the eye sockets, which, in the long-beaked face, are capable of blinking.

Unusual among Angels, Sachiel possesses a respiration system based in the thighs and crotch, breathing in through gills in the thighs and exhaling through a nostril in the crotch. The gills also serve as underwater propulsion. Sachiel possesses blood of a bluish-purple color, making it unique among Angels for whom blood has been observed. While Sachiel is not a flight-capable Angel, it demonstrates an ability to make A.T. Field enhanced jumps while escaping attacking VTOL craft.

The Angel's natural weaponry are two red "lances" that extend from its forearms and can be energized to increase their destructive capacity. These are physical structures that serve as the Angel's ulna or outer arm bone. Following the N2 land mine explosion, Sachiel developed a new face with the ability to set off cross-shaped explosions through its eye sockets. The explosions can be used against aerial targets such as reconnaissance aircraft and, against fixed structures or even be horizontally oriented. Sachiel is also capable of altering its body shape and muscle mass, increasing its muscle mass when under strain. As a last resort, it can wrap itself into a ball around its opponent and self-destruct.

Due to it mostly focused on searching for Lilith the second Angel within GeoFront, it doesn't show much form of behavior or other kind of personality like majorities of Angels in the franchise. It didn't even take JSSDF forces seriously as it mostly used it's AT Field as means to both deflect their attacks and left them wasted their ammunitions simply to destroyed it. Although, the only known aggressive attempt on them were only spearing one of their plane and destroyed another whom observed it having it's second face grows after attacked by N2 bomb.

Like all Angels, had it facing a lifeform which having the identical essence with them but is not Lilith (namely Evangelions), Sachiel would engage them in more serious manner. Sachiel was obviously overestimating Evangelion Unit 01 (whom at that time was controlled by Shinji for the first time) as it ended up fell flat and used this opportunity to broke it's left arm and speared the Evangelion's right eye on a building. But once the Eva went berserk, Sachiel became agitated where it goes so far to projected it's AT Field with maximum dense to the point it became visible to deflect the rampaging Eva's attack and when it finally became helpless, it resorts to self destruct near the Eva, which the attempt was futile.

Sachiel first appeared out of the ocean, coming ashore just east of Tokyo-3. The JSSDF tried to stop Sachiel's advance, sending in a force of tanks and Heavy Fighter Jet-VTOL craft, but they failed miserably.

After advancing past the tank battalion stationed on the shore, Sachiel was knocked back by a missile barrage from VTOL craft- possibly simply in surprise. The Angel soon got used to the attacks and didn't even flinch. Instead of behaving like a stereotypical "rampaging giant monster", it shot down a VTOL that had attacked it with the attitude of swatting a fly, before avoiding the attackers with a huge A.T. Field assisted leap similar to limited flight.

The JSSDF eventually used their last resort by luring Sachiel to the region of Mt. Takanosu, and then detonating a planted N² Mine underneath its feet. This results in considerable damage to Sachiel, melting some 18% of its mass, but it is only a matter of hours before it regenerates the damage. In the process of regenerating from the N² Mine attack, Sachiel's original bony "face" structure is pushed towards the upper right of its torso as a new slightly more rounded bony "face" grows from the center of its chest. While this fails to stop Sachiel, it does slow down the Angel long enough for Nerv to prepare Evangelion Unit-01 to be sent into combat against Sachiel.

Sachiel appears to be capable of learning from its environment and upgrading its physical capabilities in response to external threats. After the Angel regenerates from the N² Mine attack, it develops a new ability: a long-range energy blast (which results in crucifix-shaped spikes of energy) which it fires from its eyes.

Finally, Eva-01 was launched against Sachiel, but the Eva promptly fell flat on its face. Sachiel then grabbed Eva by the head, and broke its left arm. During this, Sachiel again displayed its ability to adapt, by instantly increasing the muscle mass of its own arm to increase its physical strength. While holding Eva-01 by the head, Sachiel then shot out its energy lance from its palm, impaling Eva-01's head and flinging it against a building.

However, Eva-01 then went into "berserker" mode, making a somersaulting drop-kick against Sachiel ending in Eva-01 ripping off half of Sachiel's ossified face. Eva-01 made a second rampage at the Angel, only to be stopped by its A.T. Field. The Eva regenerated its broken arm and eroded the A.T. Field with its own. Sachiel used its cross-blast weapon against the Evangelion, to no effect. The Eva proceeded to grab both the Angel's arms with its left hand and broke them with a sharp snap, then kicked it into a building, and followed up by charging into it. The Eva then broke off pieces of bone from Sachiel's exterior ribs and repeatedly drove them into the Angel's core, slowly cracking it. Realizing it was on the verge of defeat, Sachiel once more adapted itself to give its body a whip-like consistently then jumped onto Eva-01, wrapped itself around the Eva, and self-destructed. However, even this self-sacrificial attack failed to destroy Eva-01, which emerged from the destruction with only moderate damage. 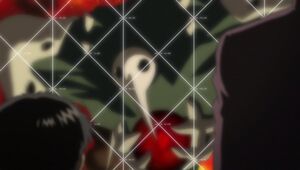 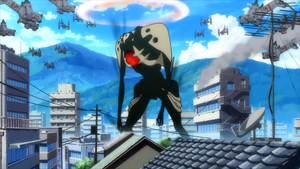 Sacheil in Rebuild of Evangelion, 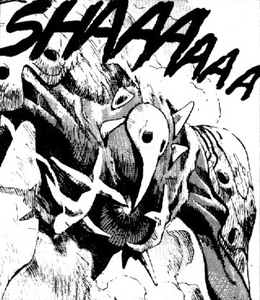 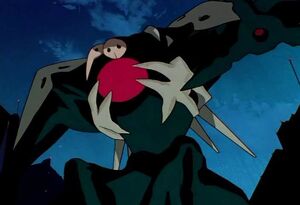 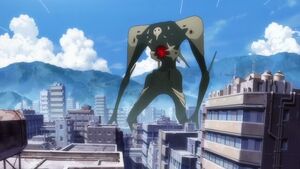 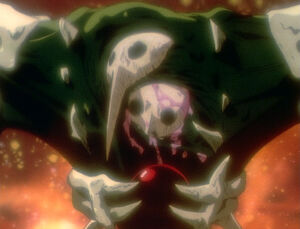