All of Sadako and Kayako's original supernatural powers.

Sadakaya is the final antagonist of the 2016 crossover horror film Sadako vs. Kayako. She is the demonic amalgamation of the vengeful ghosts of Sadako Yamamura and Kayako Saeki.

She was portrayed by Mizuki Yamamoto.

After countless people were brutally murdered by Sadako and Kayako respectively across Japan, Shinto exorcist Keizo and his psychic companion Tamao devise a plan to rid both entities. It involved having the two ghosts fight each other, which would hypothethically obliterate both of them in the process. Yuri, who watched Sadako's cursed videotape, shows the tape to Suzuka, who visited Kayako's haunted house, in an attempt to summon both ghosts. Sadako and Kayako brutally fight each other in the Saeki household but it eventually ends at stalemate, foiling Keizo's plan.

Keizo instructs one of the girls to be bait to lure either entity to be trapped in a nearby well outside. Yuri bravely sacrifices herself and as she stands on the edge of the well, she sees Sadako and Kayako standing opposite each other in the distance. Yuri jumps into the well as they collide towards each other, seemingly blasting them both. The blast instantly bisects Keizo and shortly afterwards, a tentacle-like abomination is born. The abomination leers at Suzuka and Tamao before falling into the well, instantly crushing Yuri to death.

Instructed by Tamao, Suzuka seals the well shut. However, they hear rumbling noises coming from the well, prompting Tamao to exclaim that "they're merging". The lid sealing the well is blasted open as a new entity, Sadakaya, is born. Controlling Yuri's dead body, Sadakaya emerges from the well. She has the appearance of Sadako, with a mass of long, black hair concealing her face and wearing a white dress, and the behaviour of Kayako, emitting a death rattle whilst she walks in jerking movements. Sadakaya psychically attacks Tamao in her subconscious whilst Kayako's undead son Toshio watches from behind. Suzuka panicks as Sadakaya reveals her face, which is revealed to be Yuri's. The fates of Tamao and Suzuka are left unknown.

In the stinger of the film, Sadakaya appears in Sadako's former cursed videotape as she teleports towards the screen. Early on in the film, Natsumi, Yuri's best friend, uploaded the cursed video on a streaming site, garnering 6,048 views, prior to being killed by Sadako. Its heavily implied that by watching the cursed video or visiting the Saeki house or doing both at the same time would summon Sadakaya. Because of this, its assumed that Sadakaya will be the one killing all of these future victims since Sadako and Kayako only merged a day after the upload.

Being an unique entity due her birth from two powerful Onryōs, Sadakaya gained all powers and abilities of both, making her a very powerful entity. She was a flesh and tentacle abomination, spawned out of pure hatred, but however, was able to shift into any appearance she desired (i.e. Sadakayo appearing as Sadako, whilst emitting Kayako's death rattle and mimicking her body movements). Sadakaya is seemingly unstoppable, as shown through Keizo's brutal bisection, who was previously able to overcome both Sadako and Kayako with ease.

Besides physical strength, Sadakaya also has immense psychic powers, one of them being able to invade other people's minds. Tamao was an example of how Sadakaya was able to psychically torment people, since her mind went temporarily static, warping the reality around her, when in proximity to the abomination.

Sadakaya crawls out of the well. 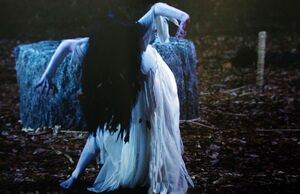