Seek revenge on those who wronged her and torment and kill as many humans as possible.

Destroy humanity.
Be reborn (all succeeded).

Sadako Yamamura is the main antagonist of the Japanese psychological horror film franchise Ring, and the crossover film Sadako vs. Kayako which was based on the novel series of the same title by Koji Suzuki.

She was a young yet troubled psychic who was brutally murdered and thrown into a well by her father or his doctor, depending on the continuity, in an attempt to stop her powers from spiralling out of control. The plan, however, failed as she returned as a ghostly serial killer, using her powers to create a cursed videotape that will kill anyone who watched it 7 days later.

Her character was portrayed by the seven actresses, being Rie Inō in Ring and Ring 2, Hinako Saeki in Rasen, Yukie Nakama in Ring 0: Birthday, Ayane Miura in Ring: Kanzenban, Tae Kimura in the TV series Ring: The Final Chapter and Rasen, Ai Hashimoto in Sadako 3D, and Sadako 3D 2, Elly Nanami in Sadako vs Kayako, Jing-Wen Sun in Bunshinsaba vs Sadako, and Ru Yi in Bunshinsaba vs Sadako 2.

In addition, she is incarnated as Park Eun-Suh in the South Korean remake and Samara Morgan in the American remake.

In the summer of 1946, Shizuko Yamamura retrieved a statuette of an oceanic deity, En no Ozunu, from the ocean floor with the help of her childhood friend Genji. Soon after, she began to exhibit psychic powers. The following year, against her friends' advice, Shizuko travelled to Tokyo, where upon arrival, she collapsed due to a migraine, which was revealed to be a side effect of her newly gained powers.

Recovering in hospital, she met Dr. Heihachiro Ikuma, a professor of psychiatry. Ikuma was fascinated by Shizuko's powers, and quickly fell in love with her. When she conceived, she traveled back to her hometown on Oshima Island to avoid causing a scandal for Ikuma. Later that year, on October 31, 1947, a baby girl named Sadako was born, and Shizuko handed her over to her grandmother whilst Shizuko moved and stayed with her lover.

In 1950, when Sadako turned 3, Shizuko returned for her, and they left Oshima, not to be seen for 5 years. Within these years, Shizuko gave birth to a boy, but he died from illness after 4 months. Sadako had psychic powers like her mother but grew up isolated and socially awkward, unable to make any friends.

At an ESP demonstration hosted by Dr. Ikuma, Shizuko was branded a charlatan after she abruptly ended the demonstration due to illness. Because of this, Ikuma divorced Shizuko, the latter falling into a deep depression. The following year, Sadako suggested that she and Shizuko go back to Oshima to escape the press. Before the year was over though, Shizuko committed suicide by leaping into the volcano, Mt. Mihara, and Sadako went to live at Yamamura Villa, run by her uncle, Takashi.

At the age of 11, Sadako predicted the eruption of Mt. Mihara, which was proven correct, but denied having any psychic powers. Knowing what could happen if her powers grew, at the age of 19, Ikuma sent Sadako to Tokyo, where she joined the Hisho Acting Troupe. Her powers unfortunately went awry when she accidentally created a cursed sound recording, which caused five of her co-workers and the troupe director to die of heart attacks. It is reported that Sadako fell in love with Toyama, the sound manager, but after a spiteful troupe member exposes their intimacy through an explicit recording, Sadako left Toyama and never returned.

In the summer of 1966, her father contracted tuberculosis after trying to gain psychic powers on his own. Sadako visited him frequently at the sanatorium. On one of her visits, she was raped by a man named Nagao Joutarou, a young doctor who watched her bedridden father. When he raped her, he found out that, while appearing female, she had external testes due to Testicular Feminization Syndrome. It was a secret she kept hidden throughout most of her life and, ashamed, she telekinetically attacks him. However, he strangled her and threw her down a nearby well.

Sadako survived on sheer willpower for 20 years in the well before dying. In the late 1980s, a resort is built over the site, with the sanatorium converted into a restaurant, and log cabins built. In late August, a family from Tokyo stayed in cabin B-4, which conveniently had the TV and VCR placed directly above the well. The son, who was a devoted fan of a certain comedy show, wanted to watch it. But his parents, being the ones in control, were watching something on NHK. The son agreed to record the show, which gave Sadako, as a vengeful ghost, the opening she needed. The channels were different in Hakone—but of course some child would never know that. Embedding the ring virus into the tape and burning the images, the original tape was created.

After four high school students are killed by Sadako's curse, investigators Asakawa and Ryuji postulate that Sadako mutated the smallpox virus, which she contracted from Nagao, with her own DNA and her psychic powers, planting it in the tape she made through nensha. The virus passes on to those who watch the tape in the form of a throat tumor which kills the victim within a week, forcing them to hallucinate their own rotting face shortly before death. The only way to survive is by copying the tape and passing it to someone else.

In 1951, Shizuko Yamamura, a psychic from Oshima Island, sat on the beach where she stared at the ocean for hours. In reality, Shizuko was communicating to a sea demon in an inhuman language. Eventually, the sea demon impregnated Shizuko with a baby girl named Sadako. Shizuko intended to abandon the baby girl at a nearby cave but Sadako was still there, even when the waves tried to wash her away. Reluctantly, Shizuko raised Sadako as her own child.

At the same time, Shiuzko predicted the eruption of Mt. Mihara with her psychic powers. Hoping to make money off of Shizuko, her brother Takashi leaked this to the press, and Shizuko became famous overnight. This attracted the attention of Dr. Heihachiro Ikuma, a university professor from Tokyo who wanted to prove the existence of ESP. He sailed to Oshima Island and visited Shizuko, where they began a love affair and eventually married each other. Noticing that Shizuko's daughter Sadako had no father, Ikuma took the role of being her father. After their marriage, Ikuma took Shizuko and Sadako to Tokyo to study their powers and use them as evidence for his experimental studies on the existence of ESP.

A few years later, Ikuma held an ESP demonstration in Tokyo with members of the press present. Ikuma and Shizuko proceeded with the demonstration whilst Sadako watched from backstage. Even though Shizuko never failed in proving her psychic abilities, Miyaji, a journalist, denounced her as a fraud. Other journalists also joined in the slander against Shizuko. Having enough of this unfair treatment, Sadako used her psychic abilities to stop Miyaji's heart, instantly killing him. The journalists observed his dead body and noticed his face was permanently twisted with fear, prompting them to blame Shizuko for his death. However, the true killer simply scuttled away.

After the demonstration, Ikuma was fired from his university and Sadako split into two clones of herself: one was good whilst the other was evil. He moved his wife and the Sadako clones to his house in the forests of Izu Peninsula. According to Miyaji's fiancé Akiko, all of the people who were involved in the slander against Shizuko were found dead. It is implied that Sadako, particularly her evil clone, killed them one by one. Meanwhile, Shizuko grew depressed and ultimately insane as she often spent hours combing her hair in front of the mirror with a grim expression on her face. Shizuko eventually returned to Oshima Island to jump into the crater of Mt. Mihara on the same day she accurately predicted it to erupt.

Meanwhile, the vengeful Akiko tracks Sadako down at the acting school and arms herself with a gun to protect herself from Sadako's presence. Akiko tries to gain evidence that Sadako actually possessed psychic powers and after successfully gaining evidence, she convinces Toyama's ex-girlfriend Etsuko to expose Sadako's past to the public by playing the recording of the infamous ESP demonstration during a theatrical performance. This causes Sadako's powers to go awry and kill her psychiatrist, leading the other troupe members, except for Toyama and Etsuko who restrains him, to angrily beat Sadako unconscious.

Returning to Sadako's childhood home, Akiko and the other troupe members demand Ikuma to reveal the whereabouts of the evil Sadako clone. Ikuma agrees but when Akiko storms the attic, she finds her missing. Meanwhile, the evil Sadako clone goes outside and merges with the unconscious good Sadako clone, reviving her. In her merged form, Sadako kills all the troupe members, including the sympathetic Toyama. Akiko and Etsuko survive the killing spree and hide in the house but Sadako corners them and forces them to shoot themselves. Ikuma returns and fearing what his daughter might become, he plans to drug her with poison. Knowing his plans, Sadako flees outside to an old well. Ikuma chases her and grabs a nearby machete, bludgeoning her head twice, before dumping her body inside the well. Sadako used the power of hate to sustain herself for 30 years but eventually dies.

Many years later, Ikuma's house was sold after his mysterious death and it was later converted into a set of rental cabins, which were built directly over the well. According to an urban legend, a Tokyo schoolboy travelled to the cabins for a vacation with his family. Not wanting to miss his favourite TV program from Tokyo, the boy found a nearby blank videotape and recorded the TV program, completely unaware that the channels in Izu were different than the ones in Tokyo. Meanwhile, as a vengeful ghost, Sadako transferred disturbing images onto the blank videotape and the boy unknowingly watched the entirety of the cursed tape. He received a phone call from Sadako, warning him that he'll die in 7 days later. Seven days later, the boy was found dead and its presumed that Sadako found him and killed him on the 7th day. Many people dismissed this as a mere urban legend until four teenagers were killed in the exact same manner after watching the exact same tape in the exact same place, prompting a prolific investigation.

Over the course of the Ring series, Sadako displayed a vast array of psychic powers when she was alive. After her death, Sadako returned as a vengeful ghost with long, black hair concealing her face and fingernails torn off and wields more destructive psychic powers, which were fully manifested in her creation of the infamous cursed videotape. 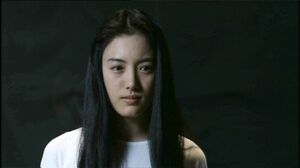 Sadako when she was alive. 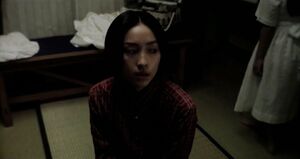 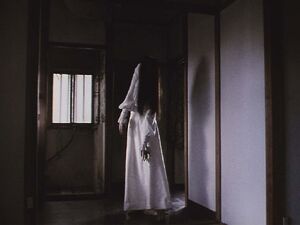 Sadako in her killing mode whilst alive. 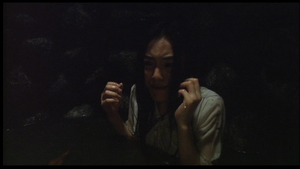 Sadako in her well. 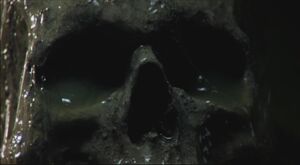 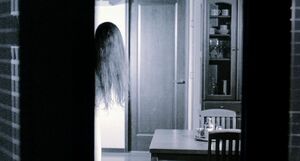 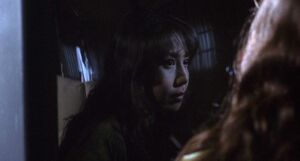 Reiko seeing Sadako in the reflection. 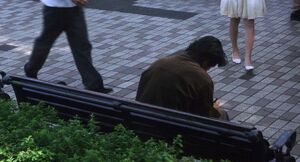 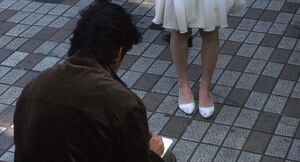 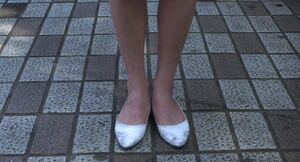 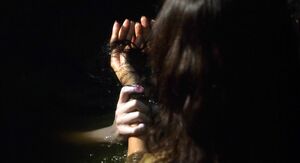 Sadako in the dimension of the cursed videotape. 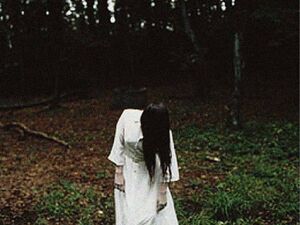 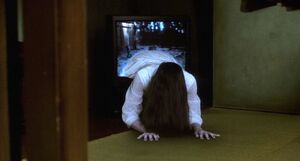 Sadako emerging from the TV. 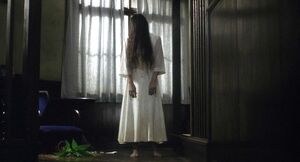 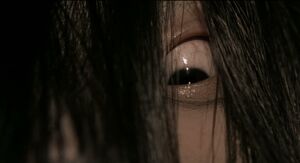 Sadako's stare which literally causes her victims to die of fright, shock or heart attack. 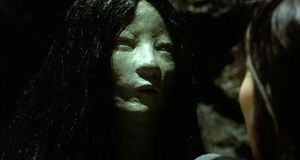 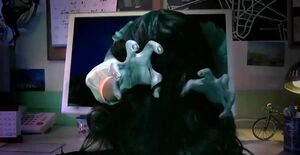 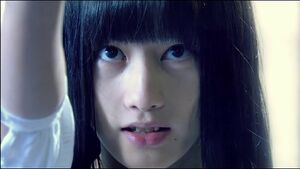 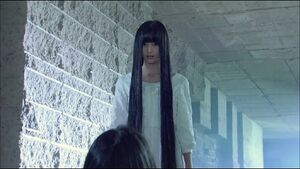 Sadako in the house of her rival, Kayako. 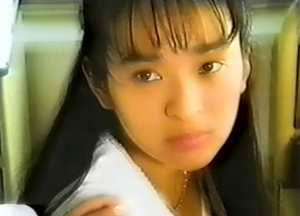 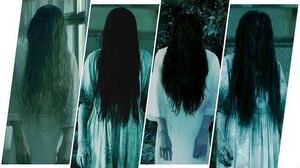 The Ring Evolution in Movies & TV. (Sadako & Samara)
Add a photo to this gallery

Retrieved from "https://villains.fandom.com/wiki/Sadako_Yamamura?oldid=4251488"
Community content is available under CC-BY-SA unless otherwise noted.