Having sex with Satan.

Torturing people in the hell.
Killing.

Be the new Prime Minister of Canada.

Return to Earth and take over the entire world.
Continue to be Satan's abusive boyfriend.
Kill Eric Cartman (all failed).

He is the former dictator and president of Iraq as well as the gay lover of Satan. However this relationship came to an end after Saddam's continual abuse finally lead to Satan killing him.

He was voiced by series co-creator, Matt Stone who also voices other characters in the series, including Father Maxi.

Ironically Saddam was portrayed as the more malevolent of the duo and was often cruel to Satan, he also had an extreme hatred of Canada - wishing to take it over on several occassions.

Saddam spoke in a very unusual manner that was designed for comedy and was prone to saying things like "hey guys! relax!" - save for the name the South Park Saddam had very little in common with his real world counterpart but had a real picture of Saddam's face used in place of the usual cartoon features given to South Park residents.

Ironically despite dating Satan Saddam Hussein has been depicted more or less constantly as more malevolent than the usually anti-heroic Satan, in fact Hussein is arguably one of the few characters in South Park that is almost universally hated and reviled (even Satan disliked Hussein, staying in the relationship with him due to his attraction towards the "bad boy" stereotype).

Saddam's evil was shown from his first official appearance in the series right up to his seeming demise, when disguised as the Prime Minister of Canada (a spoof of the Wizard from the Wizard Of Oz) one of his first acts was to murder Kenny.

However despite his malevolence Hussein is also depicted as a manipulative coward who will shy away from true combat unless he has the upper-hand (this is when he often quotes his catchphrase of "hey guys! relax!").

Hussein first made a brief cameo in "Tom's Rhinoplasty"  shown as evidence of Ms. Ellen being Saddam's mistress. He first appeared in "Terrance and Phillip in Not Without My Anus" in which he kidnapped Celine Dion and tried to take over Canada. 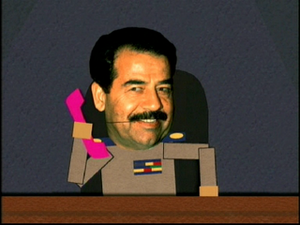 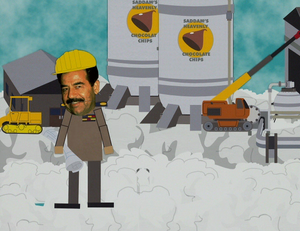 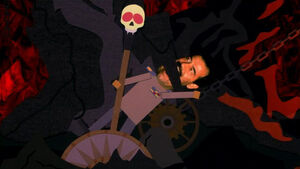 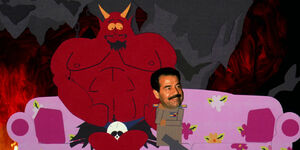 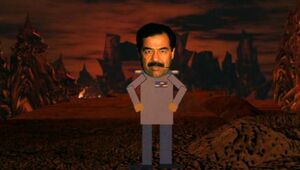 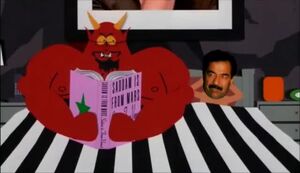 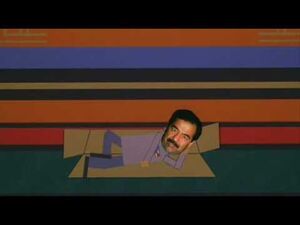 Saddam singing "I Can Change" 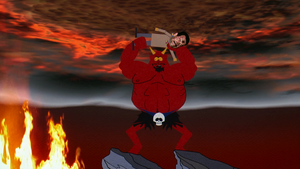 Saddam's defeat
Add a photo to this gallery

Retrieved from "https://villains.fandom.com/wiki/Saddam_Hussein_(South_Park)?oldid=3447540"
Community content is available under CC-BY-SA unless otherwise noted.