Leader of the Red Eyes of Rylai clan

Fighting and killing her competitors.

Hunt down and kill competitors in order to successfully claim the Killer Instinct tournament for the Red Eyes of Rylai clan.

Sadira (Dreamy in Persian) is an enigmatic female fighter and a debut character in the 2013 Killer Instinct videogame. Sadira is also the charismatic leader of a guild exclusively female assassins known as the Red Eyes of Rylai (better known as "Red Eyes") in Thailand that have begun hunting down competitors in the Killer Instinct tournament.

Sadira is extremely pale, she has long black hair and her eyes are also notably and unnaturally glowing yellow. Sadira wears a mulberry-colored outfit with a hood and a decorative mask. She appears to be wearing ripped stockings on her legs. In general, her clothing appears to be of a Persian or Arabian design, perhaps hinting at her nationality. She has bladed gauntlets with two talons protruding from the knuckles.

Sadira was born somewhere of the of Thailand, an area rife with bloody conflicts waged between ethnic groups and the Communist government of Myanmar. As a child she learned to fight in order to survive in the tough camp, training in the muay boran—the ancient boxing style of the region. Her instructor tried to teach her that this martial art was meant to build character, but what Sadira loved about it was the sheer violence…the thrill of pummeling, dominating and humiliating another human.

And she craved something darker and more satisfying than just a contest.

Sadira would later found by the Red Eyes of Rylai's members in refugee camp during Communist insurgency in Myanmar during the 1980s. She gladly joined their order and quickly rose up the ranks due to her innate ferocity.

Her first act was to fight a fellow initiate using glass shards tied to her fists with hemp rope. Sadira toyed with her outmatched and terrified opponent, using the glass to disfigure her face, leaving her alive as a warning to the others.

In spite of aware with how vicious Sadira can be within their clan, The Master took a liking to Sadira and personally took her under her wing, and treated Sadira like a daughter, giving the troubled young woman the only true affection she had ever known. However, The Master overestimated Sadira's dark side as when she revealed her future destiny to become future leader of the clan and offer her help, Sadira killed The Master in cold blood.

Satisfied, Sadira took The Master's spider necklace and sits lazily on the throne. But suddenly, the spider necklace come to life and dug its way to her heart, consuming/absorbing it onto itself and bestowed Sadira spider-like powers. At first, Sadira was frightened, but eventually amazed with her newfound powers. 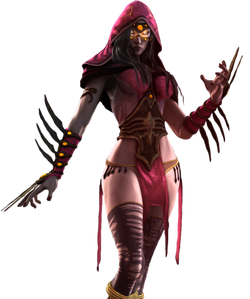 Sadira
Add a photo to this gallery

Retrieved from "https://villains.fandom.com/wiki/Sadira_(Killer_Instinct)?oldid=3745139"
Community content is available under CC-BY-SA unless otherwise noted.