Second-in-command of the Moro Corps

Help Moro rid the universe of law and order

Saganbo is the secondary antagonist of the Galactic Patrol Prisoner Saga in Dragon Ball Super. He is Moro's right-hand man and second-in-command of the Moro Corps.

Saganbo first appears when Moro escapes prison and strikes a deal with him, promising to give him and the rest of the prisoners energy and freedom if Saganbo works for him and forms a small army of Galactic Patrol Prisoners to work for him as well. Saganbo agrees, and waits for Moro to free them. Later, Moro uses the third and final wish from the Namekian Dragon Balls to free all the prisoners from the Galactic Patrol Prison, Saganbo is smiling and pleased that he is free and somewhat surprised that Moro managed to free them. He then uses his telekinesis to grab a gun from one of the Galactic Patrol guards, and then breaks through the window of a control tower. He holds the control tower guard at gun-point, forcing him to give them their ships. Saganbo then tells the other prisoners to join him for fun and for the power they would gain from Moro.

Saganbo steals a very large ship, and he and the rest of the Galactic Patrol prisoners arrive on New Namek. Moro lands on the ship, where Saganbo comes up to greet him and bow in obedience. Moro compliments Saganbo for bringing an army, and fulfills his part of the bargain, giving Saganbo and the rest of the prisoners some of his energy.

While the prisoners all attack Goku and Vegeta, who are fighting in their Super Saiyan Blue forms, Saganbo watches from on the top of the ship, yelling at the prisoners to keep fighting or else go back to the prison. He also orders them to attack all at once, claiming Goku and Vegeta can't hold all of them off at the same time. Moro then begins collecting energy from the planet once again. Goku, who reverted to his Super Saiyan God form, attempts to stop Moro, but Saganbo jumps down to stop Goku. As they are rushing towards one another, Goku goes down to a Super Saiyan 3, and Saganbo manages to land a blow strong enough to actually knock Goku to the ground, with him reverting to base.

Going back on the ship, Saganbo notices a Galactic Patrol ship in the sky and prepares to shoot it down, but Merus knocks his gun out of his hands using his own blaster. Saganbo is shocked that Merus was able to shoot his gun away at such long distances. After Goku uses Instant Transmission to retreat, Saganbo wonders where Goku and his friends went. Moments later, when the other prisoners are attempting to shoot down the Galactic Patrol ship, Saganbo berates the prisoners for not being able to bring down the ship.

When Moro asks if Saganbo knows of any planets with remarkable life force he tells Moro that before being locked away in prison he used to be part of a crew that rampaged around the galaxy so has a few ideas. He has his scouts scour across the galaxy in search of such planets for Moro and then joins his men on the planet Zoon when stealing the royal treasure.

Later, Saganbo receives a distress signal from the Macareni Siblings on Earth and asks Moro what should be done about it only to be told to send a stronger scouting party there, so Saganbo sends Shimorekka, Yunba and Seventhree to deal with it.

Saganbo is contacted by Shimorekka, and is informed by him that due to the power of Earth's warriors Seventhree had to unleash Moro's power. Saganbo has Shimorekka switch to monitor so he and Moro can see exactly what is going on. Saganbo tells his men to pull back and suggests to Moro that they should destroy the Earth as soon as possible, however Moro tells him that they will wait for Goku and Vegeta to return so that they can obtain their energy too.

Eventually, Saganbo and Moro arrive on Earth to confront it's defenders. Before Moro can enter battle himself, Saganbo offers to fight in his place, upon which Moro agrees but orders him to spare them for Moro himself to deal with afterwards. Saganbo agrees, and Moro grants him even more energy to fight, causing Saganbo to bulk up. He charges forward to overpower Android 17 and begins thrashing everyone present, including Gohan, Android 18, Jaco and Piccolo.

Eventually, Goku arrives to face Moro, but the wizard demands he face Saganbo first, who eagerly agrees to fight in his superior's stead - though quickly finds himself unable to damage Super Saiyan Blue Goku in the slightest and is overwhelmed. After receiving continuous power boosts from Moro, Saganbo becomes more unhinged, sporting a mad grin on his face and becoming more erratic in his attempts to damage Goku, with even the Saiyan demanding Moro stop overstressing Saganbo's weakening body with energy, to which Moro retorts that Goku should keep fighting Saganbo so Moro will not boost his power anymore. To that end, Goku tries to convince Saganbo to stop pushing his body further, but Saganbo is unwilling to listen, hellbent on not going back to the slammer even after hearing about his fellow prisoners' defeats - and collapses dead from the immense bodily stress, no longer able to handle the power boosts Moro had granted him. Moro snarks his disappointment in Saganbo's inability to handle such a "tiny" increase in energy, while an angered Goku prepares to finally face Moro alone.

Saganbo sports a real-life 1950s criminals' hairdo. He has a nose-less face and is slightly taller than an average human, his body structure is muscular.

Saganbo is a violent, greedy mercenary and is a criminal to the core who likes money, power, mayhem and chaos. He is extremely loyal to Moro and obeys his every command as he also informs him of every planet he's traveled to in the galaxy, although he could simply be loyal to him out of the benefits he gains with Moro and for the fear of death if he attempts to defy Moro. Saganbo is extremely greedy and cruel in every way, as he and his crew enjoy stealing all treasures and resources from entire planets and doesn't care if he leaves the inhabitants poor, broke and then destroyed by Moro. He remains loyal enough to fight for Moro even when his body is pushed to immense amounts of stress by Moro himself, an action which eventually results in his demise.

Saganbo with his boss Moro 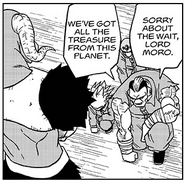 Saganbo and his crew invade Planet Zoon and kill all of its warriors to steal the royal treasure.