Cause destruction as much as they can.

Aid Vegeta with his goals.

Saibamen (or Cultivars) are green humanoid creatures that grow from a planted seed placed in the ground. They possess only enough intelligence to understand orders given to them by their leaders, thus they will never revolt. Developed in Age 737 by an unknown scientist, they were a common tool of Frieza's World Trade Organization due to their low cost, ease of mass production, and expendibility. The Saibamen in use by Nappa and Vegeta are more advanced, thus their power levels are around 1,200, equal to that of Raditz. They were once also used to train young Vegeta, who made easy work of them. They served as supporting antagonists in the Saiyan Saga.

Prior to the destruction of Planet Vegeta, Saibamen were frequently used by the World Trade Organization in training exercises for young warriors. In one scene, Vegeta effortlessly defeated a large number of them at the age of four. It is also assumed they were used as expendable manpower in Frieza's army.

Only six were left after the Tritek War and were planted by Nappa on Earth during a fight against the Z Fighters. One was destroyed by Vegeta because it failed to defeat Tenshinhan. Another used the Saibamen Bomb self-destruct attack in order to kill Yamcha and itself. Three were defeated by Kuririn's expanding Kamehameha wave, and the last was killed by Piccolo (after stopping it from attacking Gohan).

Many years later, they were released from Hell along with the rest of the villains and were destroyed by Majuub, Trunks and Son Goten and sent back once again. 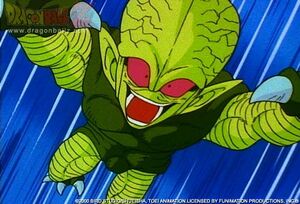 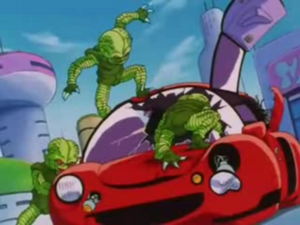 Saibamen as they briefly appear in Dragon Ball GT. 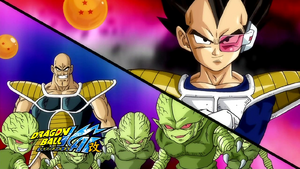 Saibamen, Nappa and Vegeta in eyecatch