Villains Wiki
Register
Don't have an account?
Sign In
Advertisement
in: Kamen Rider Villains, Doctors and Scientists, Non-Action,
and 27 more

Member of the Next Genome Institute

Saiko Yaotome (real name: Saiko Zaizen) is a major antagonist in Kamen Rider Ex-Aid Trilogy: Another Ending. She is a doctor at the Seito University Hospital studying regenerative medicine and secretly the daughter of Michihiko Zaizen, the deceased leader of the Next Genome Institute. She partners with Kuroto Dan in order to develop a way to bring back her father.

She appears as the secondary antagonist of Brave and Lazer and Para-DX and Poppy, as well as a supporting protagonist in Genm VS. Lazer.

She was portrayed by Yurina Yanagi.

Studying the Bugster virus at the Seito University Hospital Center, Saiko discovered that those erased by the Game Disease could be restored by reconstructing their human genes from the Bugster who had spawned from them. After stealing the Kamen Rider Chronicle Gashat from Taiga Hanaya, Kuroto Dan used it to revive his deceased father Masamune Dan so he could have Saiko extract Black Parado out from his body.

Saiko directed Tsukuru Koboshi to create the Bugvisor G, a new game console that served as a platform for the Let's Make a Bugster game, which could theoretically transform Bugsters into humans and thus help in finding a way to restore the victims of the Game Disease. Once the game console was completed, Saiko met with Parado and Asuna Karino to request the Parado's assistance in an experiment for Regenerative Medicine. However, right after Asuna left, Saiko captured Parado with the Gashacon Bugvisor and took him to the Next Genome Institute. There, Parado was kept trapped in cables embedded with Level 0 data from Dan's Proto Mighty Action X Origin while Saiko and Kuroto had Black Parado extracted to take his place.

Saiko and Tsukuru then presented the Bugvisor G to Emu Hojo and Poppy Pipopapo and conducted an experiment with Poppy and "Parado" (actually Black Parado). For the experiment, Saiko had them both fitted with neckbraces sporting the gauges to display their progress in clearing the game. While leaving Black Parado to play with Emu, Saiko personally administered the experiment with Poppy. Saiko had Poppy play a game of dress-up, so Poppy used her own powers as a game character to change her clothing. However, Saiko told Poppy that it would be more appropriate to wear clothes made for humans because the goal of the game was to become human. Saiko took then Poppy to a clothes store which Masamune Dan had also taken his wife Sakurako Dan just prior to the birth of their son. In the store, Saiko had Poppy try on several clothes before putting on a dress once worn by her late host, Sakurako Dan. Now that Poppy was approaching the Game Clear, Saiko captured her in the Bugvisor.

While Emu was taken to hospital after being injured by Black Parado, Saiko went to the Next Genome Institute and ended up encountering Kiriya Kujo, who had become suspicious of her and revealed that he was aware that Saiko Yaotome's father was Michihiko Zaizen. After that, Saiko left Parado with Black Parado at the Next Genome Institute before joining Kuroto at his residence where Poppy was contained. As Kuroto left to confronted his father, Saiko attempted to force-feed a batch of cherries to Poppy in order to bring her closer to her host, as cherries were the favorite food of Sakurako Dan. Saiko revealed to Poppy that the true purpose of Let's Make a Bugster was to restore Game Disease victims by sacrificing Bugsters and that since Poppy and Black Parado were respectively spawned from Sakurako and Masamune Dan, their genetic codes could be combined to restore Kuroto Dan to his human body. Parado then appeared, having used the human genes inherited from Emu Hojo to set himself free before freeing Poppy. Black Parado then showed up and transformed into Kamen Rider Another Para-DX to fight his counterpart while Saiko summoned a copy of Genomes to duke it out with Poppy. Transforming into their Kamen Rider forms, Parado and Poppy succeeded in destroying Genomes and defeating Black Parado.

Before Black Parado could be finished off however, he was absorbed by Kuroto Dan with the Gashacon Bugvisor II. Kuroto then revealed that his plan was not to become human again but to combine his skill as a genius game creator with the power of a genius gamer to achieve the talent of a god and told Saiko that she was no longer of any use to him, casting her aside. Despite having worked with Kuroto, Parado and Poppy pleaded with Saiko to continue her work to restore the victims of the Game Disease. Realizing that Bugsters did indeed have human hearts, a conflicted Saiko left the scene.

While contemplating her life, Saiko was attacked by a Zombie Gamer summoned from Kuroto Dan's new game Zombie Chronicle. Saiko prepared to accept her death but before she could be killed she was saved Kamen Rider Lazer. Kiriya told Saiko that he knew her story as well as what she betrayed, but that only she could perfect the Regenerative Medicine and bring back those who succumbed to Game Disease.

To pay back Kiriya for saving her, Saiko summoned the navigator of Zombie Chronicle, who appeared in the form of Kuroto Dan. Saiko asked how the world would be revolutionized and was told by the navigator that it would depend on the game's ending. Saiko then met up with Emu, Parado and Asuna to show them the Bugvisor G. Saiko told them that each game Kuroto created had a meaning and Kiriya must not die. Saiko and Asuna then left to go intercept Kiriya but along the way Saiko was attacked by a Zombie Gamer, causing her to be turned into a zombie and attack Poppy.

After Kuroto was defeated, Zombie Chronicle ceased and Saiko along with the others infected turned into zombies were restored to their original forms. However, their victory came at the cost of Kiriya, who suffered a Game Over alongside Kuroto and vanished as well.

However, after recovering Saiko activated the Bugvisor G and used Let's Make a Bugster, Saiko to analyze and reconstruct Kiriya's human genes before resetting them to their base state, allowing Kiriya to be restored in his human form. After the operation was completed and Kiriya Kujo was restored as a human, Saiko decided to continue researching the God Maximum Mighty X Gashat Kuroto Dan left behind, which Saiko believed could innovate the future of regenerative medicine. 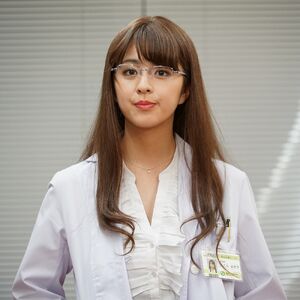 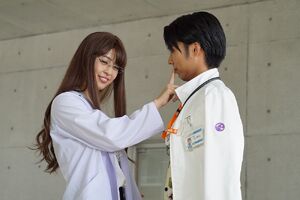 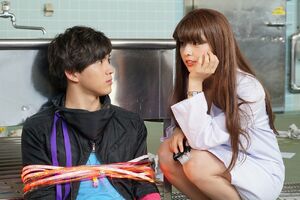 Saiko with Parado tied up. 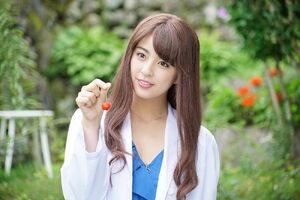 Saiko with a cherry she's about to feed to Poppy. 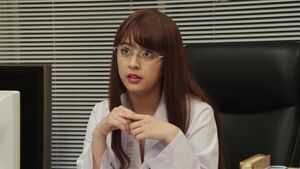