Have Jesse Custer to give him a soul and use Genesis to send him to heaven and see his family (formerly; failed).

Kill Jesse Custer and have his revenge along with Arseface (failed; formerly).
Redeem himself and go to heaven (succeeded).
Kill God (succeeded).

The Saint of Killers (real name: William) is a major antagonist of the Preacher comic book series and AMC's television series.

During the 1800s, he served in the Confederate States Army in the 4th Virginia Infantry. During the Battle of Gettysburg, he killed 77 men, earning himself the nickname; the Butcher of Gettysburg.

After he died, he was sent to Hell. There, he was forced to relive his family's death over and over. Each time, he slaughtered everyone in Ratwater as vengeance for all eternity. The Saint eventually had a visit from two angels named DeBlanc and Fiore, where they offered to release him from Hell if he killed Jesse Custer and retrieved Genesis, a powerful entity that possesses Jesse's body.

After being released from Hell, the Saint is hellbent on killing Jesse. Eventually, the Saint of Killers was given an extract of Jesse's soul, making him vulnerable to Genesis. He was then locked up in a truck beneath the Angelville swamps. He was later used by the Grail, only to be turned over to Superintendent Mannering.

In the TV adaptation, he is portrayed by Graham McTavish, who also portrayed Zoran Lazarević from Uncharted 2: Among Thieves, Joseph Bertrand III in inFamous II, both Father Kinley and Dromos from Lucifer, Dracula in Netflix's Castlevania and Loki Laufeyson in The Avengers: Earth's Mightiest Heroes.

The Saint is a very vengeful man. Though despite his fearsome reputation, the Saint was a loving husband and father, attempting to live a normal life and doing everything in his power to protect his family. However, when they died, the last piece of good in him died as well, with his soul literally shattering into pieces and scattering across the world. In his fury, he slaughtered the entire town of Ratwater, including the children as an act of vengeance.

Upon his resurrection, he is shown to be a very remorseless killer, as he ruthlessly slaughters anyone who gets in his way. After Jesse tricks and traps him, he becomes fixated on exacting revenge on the preacher. Despite lacking a soul, he still deeply cares for his family, as talking about them is a certain way to expose his wrath. The Saint went as far as to rip out Sidney's eyes for making fun of their deaths and kill Satan for his involvement in their deaths and for torturing him. He also seems to have developed somewhat of a compassion for Eugene, sticking up for him whenever Satan struck him. 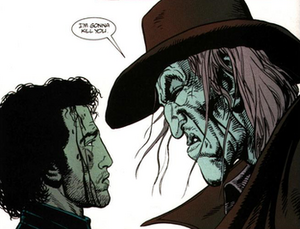 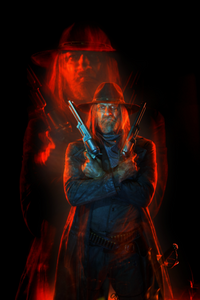 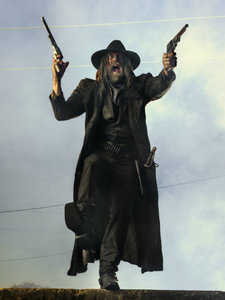 Add a photo to this gallery
Retrieved from "https://villains.fandom.com/wiki/Saint_of_Killers?oldid=3891653"
Community content is available under CC-BY-SA unless otherwise noted.