The Adventures of Tintin (movie adaptation)

Crime lord
Captain of the Karaboudjan

Find all three of the scrolls to locate and claim the treasure of the Unicorn.
Kill Tintin (failed).

He is a collector who is known to be the descendant of the infamous pirate Red Rackham, intending to find the his ancestor's treasure stolen by Sir Francis Haddock (the ancestor of Captain Archibald Haddock). He is Captain Haddock's archenemy.

He was voiced by Daniel Craig in motion capture, who also voiced his ancestor Red Rackham and portrayed Connor Rooney in The Road to Perdition.

Sakharine is a ruthless megalomaniac who will stop at nothing to obtain the treasure of the Unicorn from the bottom of the ocean. He believes the treasure is the rightful property of his ancestor Red Rackham, who was murdered by Sir Francis Haddock, the ancestor of Captain Haddock. Armed with a deadly sword concealed in his cane, a peregrine falcon, and thugs by his side, Sakharine is willing to use any means necessary to find the treasure and lead Tintin and Haddock to their ultimate demise.

Despite his villainous nature, Sakharine does seem to care for his pet falcon, even praising him for stealing all three scrolls. He is not as vile as Red Rackham.

Aware of his ancestor's legacy as an infamous pirate who tried to steal Sir Francis' treasure of the sunken ship Unicorn, Sakharine vows to avenge Rackham's death by smearing the Haddock name by all means necessary. He soon learned that before Sir Francis died, he has built three model ships, each of them which holds a clue to the location of the sunken treasure that Sir Francis saved and that the bequeathed the ships to his three sons. He also learned that Archibald Haddock happens to be Sir Francis' grandson and is the captain of a large ship called the SS Karaboudjan.

Taking the opportunity, Sakharine was able to buy the first model ship (containing the first scroll) and convinced the entire Karaboudjan crew (mostly Allan, Tom, and Pedro) to mutiny against Haddock by getting him drunk in his cabin indefinitely, allowing Sakharine to take control of the ship. Upon learning that the famed journalist Tintin has bought the second model ship from a marketplace and is taking leads on the story, Sakharine arranges for him to be kidnapped and taken to the ship, where he intends to steal the second scroll from him. However, the second scroll is located inside Tintin's wallet, which has been stolen by the pickpocket Aristides Silk, much to Sakharine's anger. Eventually, Tintin was able to escape confinement (with the help from his dog Snowy) and formed an alliance with Haddock to beat Sakharine in his game.

Upon hearing that Tintin, Haddock and Snowy have escaped and are heading to Bagghar (where the third model ship is located), Sakharine angrily orders the crew to go after them at all costs. After reaching Bagghar, Sakharine posed himself as an escort to the famed singer Bianca Castafiore. As it turns out, the third model ship is protected with a bulletproof glass case, and that Sakharine intends to use Bianca's singing voice to break the glass so that he can send his pet falcon to steal the third scroll. Just as Tintin and Haddock meet up with Detectives Thomson and Thompson (who managed to retrieve Tintin' wallet after arresting Silk), Sakharine caused a distraction by framing Tintin and Haddock as thieves, allowing him to steal the third scroll. Though Tintin was able to catch the falcon containing all three scrolls, Sakharine forced him to surrender by having Allan and Tom to push Haddock and Snowy into the water, allowing himself to take hold all three scrolls and escape with his thugs.

However, Tintin and Haddock were able to use the Karaboudjan's radio frequency to pinpoint Sakharine's current location, which happens to be the same dock where Tintin was captured and taken to. With that in mind, the duo and the police were able to set up a trap against Sakharine and his thugs, allowing Haddock to engage into a fight against Sakharine, who threatens to burn up the scrolls in retaliation. However, Tintin was able to retrieve the scrolls, allowing Haddock to punch Sakharine off the ship. Sakharine is then last seen pulled into harbor by Thomson and Thompson, who places him under arrest for his crimes. Tintin and Haddock then use the scrolls to deduce the location of the treasure, which happens to be the cellar of Marlinspike Hall.

With Sakharine along with his thugs sent to jail for their crimes as he is last seen raising his hands in surrender, realizing now that he has lost. He & his gang will think about the treasure for the rest of their entire lives. 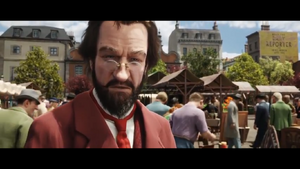 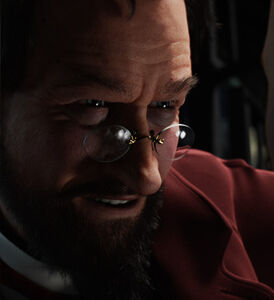 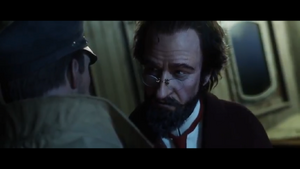 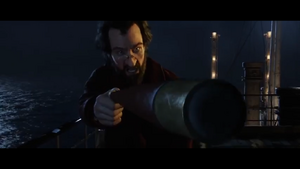 Sakharine points at his henchman. 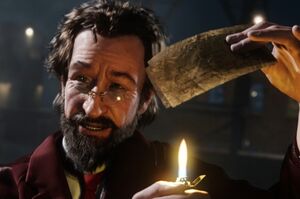 Sakharine threatening the burn the scrolls. 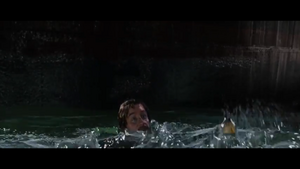 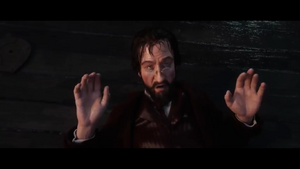