Sakusimon is a major antagonist in the Digimon anime series, Digimon Universe: Appli Monsters. He is a Super Simulation Appmon, and an underling that works for Leviathan.

Sakusimon resembles a demon sorcerer that carries a bancho fan that can produce fire. He wears a wing-like mask with a silver half, and a golden half on the other side.

Sakusimon is an underling of Leviathan.

Sakusimon first appears on October 31 as he watches Mienumon report to Leviathan. Later he finds Haru, Eri and Astra, and challenges them to a fight with them getting separated form their Appmon partners, and nearly has them crushed until Rei shows up with Raidramon and rescues them.

Later on, Sakusimon arrives in a showdown with Raidramon. He manages to torture Rei, until Haru saves him. They App-link DoGatchmon and Raidramon together to fight Sukasimon. Sakusimon attempts to escape, but DoGatchmon (App-linked to Raidramon) manages to defeat Sakusimon. With his dying breath, his information about Hajirme Rei' brother is hijacked, and is finally destroyed by Leviathan after giving away the information. 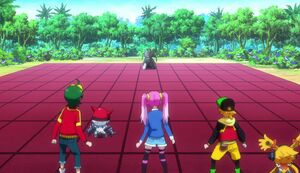 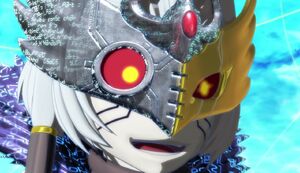 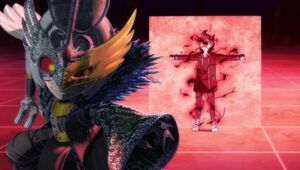 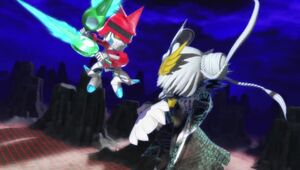 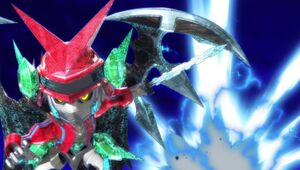 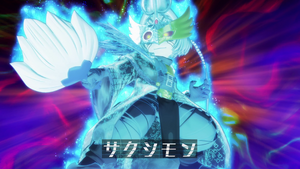 Sakusimon resurrected as a ghost. 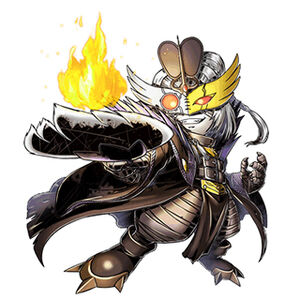 Bandai art of Sakusimon.
Add a photo to this gallery

Retrieved from "https://villains.fandom.com/wiki/Sakusimon?oldid=2570628"
Community content is available under CC-BY-SA unless otherwise noted.