Don of the Marcano crime family

Drinking with his allies.

Eliminating his useless allies and enemies.

Salvatore "Sal" Marcano is the main antagonist of the 2016 videogame Mafia III, the sequel to 2010 videogame Mafia II. Sal is the Don of the Marcano Crime Family, the ruling criminal organization and Italian mafia of the city of New Bordeaux in Louisiana. He is the father of Giorgi Marcano and responsible for the death of Sammy Robinson, Ellis Robinson, and Daniel Burke, who were respectively the adoptive father, brother, and good friend of Lincoln Clay. While this was only a small part of the plan Sal had originally masterminded, in doing so he made himself the archenemy of Clay and unleashed a path of destruction that would lead to his ultimate demise.

He was voiced by Jay Acovone.

The head of the Marcano crime family, Sal is the brother of Lou, Tommy and Lucio Marcano, brother-in-law to Olivia Marcano and father of Giorgi Marcano. His brothers and sister-in-law serve as Capos and high-ranking members of the organization while his son is his underboss.

Originally born into poverty, Sal was one of five children born to Valerio Marcano and his wife. Sal had been exposed to organized crime since infancy, as his father was an enforcer to Don Guissipe Carillo, who was the kingpin of the New Bordeaux underworld during Sal's childhood.

The exiled mobster from the city of Empire Bay, Vito Scaletta, was also an unofficial member/controversial ally of Sal, but according to Vito himself, he disliked Sal and Sal did the same, stating that Vito's been "a pain in his ass for fifteen years since the Commission sent him here". He had also been involved in Thomas Burke's disgrace when Sal took the district, Ponte Verdun, from him and put another one in charge of it.

Bringing the crime family to glory, Sal had most of the cops of the city on his pocket and controlled all of New Bordeaux' ten districts, having his puppet and sub-organizations controlling some of them, installing many rackets through the city and electing capos. He is an old friend of Sammy Robinson, the leader of the Black Mob of the city, and an ally as well, giving the Delray Hollow district to Sammy.

In 1962, Sal's brother Lucio was murdered by Olivia, who took over Frisco Fields after Lucio's death.

By 1968, the Marcano family was the most powerful criminal organization of New Bordeaux.

However, business is more important than friendship in the life Sal led, and Sammy was in deep debt with Sal due to the Haitian gang's attacks on the Hollow. Planning to remove Sammy and place another trustworthy man on control of the Hollow, Sal's "friendship" to Sammy would be worth nothing when business is involved.

His son Giorgi was an old close friend of Lincoln Clay, Sammy's protegee and protagonist of Mafia III, and Sal thought Lincoln to be the perfect man to control the Hollow, so he called Sammy and ordered the latter to tell Lincoln of a meeting at his place, not telling the reason.

When Lincoln arrived and sat with him, Giorgi and Vito at Sal's table, Sal introduced Lincoln to Vito, who Giorgi introduced as fresh from Vietnam. Vito, a fellow Army veteran, was glad to see a fellow veteran home, himself having fought in the Second World War. Vito then said he had other business to attend to and excused himself. Once Vito was out of earshot, Sal said how the man was a pain in his neck, but he could not argue with the Commission. Sal then made the big offer to Lincoln of controlling the Delray Hollow district and giving money for Sammy to retire, but Lincoln refused, telling him that he couldn't do that to Sammy.

Disappointed by Lincoln's answer, Sal exchanged worried looks with Giorgi, before quickly regaining his composure and telling Lincoln that he understands, because Lincoln is loyal and according to Sal himself, "loyalty is something scarce nowadays".

He then suggested a heist to Lincoln and the Black Mob, telling Lincoln that they could steal some money from the feds if they took one money shipment truck, which was scheduled for a semiannual shipment of old money to the Federal Reserve to be destroyed. This would be a way to gain access to the Fed. This time, Lincoln accepted this offer, and the Marcano family and the Black mob prepared to join forces in order to make the heist possible. Aside from Lincoln, one member of the Black Mob had a legal job at a dry cleaning service. He used this position to steal two uniforms which legitimate security guards had bailed to him, giving them to Lincoln and Giorgi to help them sucessfully impersonate Federal Reserve security officers.

The heist was a success, and Giorgi, who participated in the heist, arrived at Sammy's Bar. There he saw his heist compatriots and good friends Danny Burke, Lincoln Clay and Ellis Robinson rejoicing. Sammy was also present, having counted the loot at at least eight million dollars. Prior to Giorgi's arrival, Sammy gave a speech to the three men about being overjoyed at being out of debt and they all the freedom to determine their own lives.

Sal and an enforcer named Ritchie Doucet then arrived on the bar. Sal said that Ritchie was here to collect his cut of the heist. After some talking and saying it was time to get to drinking, Sal nodded to Giorgi, who turned to Lincoln and told Lincoln that "You might have been the baddest motherfucker I have ever met in my life... but you shouldn't have said no." and then proceeded to shoot Lincoln in the forehead.

Ritchie Doucet then pulled a knife out and stabbed Ellis to death while Giorgi then shot Danny, and Sal then shot Sammy to the ground. Sammy did not die immediately, as he was hit in the shoulder, and attempted to scamper away, only to be shot again by Sal Marcano, who uses racial slurs against him.  Sal, Giorgi, and Doucet then sat the place on fire and escaped. Unbeknowst to the trio until later, Lincoln had survived (but barely) as his skull was able to handle the bullet and Father James paid an impromptu visit to Sammy, to which he noticed the bar was aflame and saw the three dead men. He also noticed Lincoln was about to die and carried him to safety. Father James then took Lincoln to his church, where he nursed him back to health after spending a long time unconscious.

The loss of boss Samuel Robinson and the heir apparent Ellis Robinson, combined with the recent money troubles the gang had suffered, prove to be too much for the Black Mob, which falls apart in the wake of the fire at Sammy's Bar. Sal Marcano fills the void by awarding Delray Hollow to Ritchie Doucet, who then becomes boss of the Dixie Mafia. Doucet runs a low-level brothel in the neighborhood. However, he goes behind Sal Marcano's back by working with Giorgi to make and distribute heroin, which Sal disallows. The Dixie Mafia, while profiting from the smack trade, has their fears it may cause Sal Marcano to turn on them.

What he didn't know, was that the bullet that Giorgi shot on Lincoln had not killed him by an inch, only leaving a scar. Lincoln, with the help of Vito, who Sal had almost killed after thinking that his usefulness had vanished, Cassandra the leader of the Haitian mob and Thomas Burke, leader of the Irish mob, then started a gang with Lincoln as the boss, determined to end Sal's reign over the city and kill every single Marcano in the city.

As Lincoln takes the Hollow from the Dixies and executes Doucet by hanging him on the Ferris Wheel of the Baron's Saturday Fun Park, and then takes both Pointe Verdun and River Row and takes Sal's lieutenants Michael Grecco and Roman Barbieri down, Uncle Lou, Sal's oldest brother and capo in the family, somehow learns who was responsible for the fall of these lieutenants. When Sal is privately talking to his son of the plans to open a casino, Giorgi protests that they could make double, or even triple the projected profits by selling heroin instead of "running some dumb ol' casino", Sal says times are changing and he sees the writing on the wall for the Mafia in general, and wishes to flee the yoke of the Commission. The talk is interrupted by a phone call, where Lou informs his brother that Lincoln Clay is still alive.

The next weeks and months are not very fortunate for Sal, as Lincoln kills Sal's bookkeeper Tony Derazio and destroys Sal's Cuban smuggling operation by killing Frank Pagani. Sal also has a falling-out with Enzo Conti, one of his oldest friends and lieutenants, and sends a squad of hitmen to finish Enzo, but Lincoln helps Enzo skip town and is rewarded with Barclay Mills. With the lieutenants dead, Lincoln moves on to kill Sal's capos, who are his two brothers and his sister-in-law.

Lincoln takes Tommy Marcano's rackets in the Southdowns district and further weakens the Marcano organization. Sal meets Tommy and tells him to protect the money plates Giorgi stole during the Federal Reserve heist, after Tommy's counterfeiter Alvarez escapes town. Shortly after, Lincoln confronts Tommy in the Acadia Boxing Gym and burns him alive by setting the gym on fire. After that Uncle Lou's political acquaintance Cornelius Holden is killed and Sal's out of political associates to legalize gambling for the construction of his Casino. Uncle Lou tries to get Senator Walter Jacobs on his grip by throwing a fundraiser at his boat, the Delphine, but both Lou and Jacobs end up killed by Lincoln (Jacobs indirectly), who guts Lou and puts him on display on a statue of St. Andrew.

After that Remy Duvall, Sal's associate who owned the land he was going to build the Casino, was killed by Lincoln, who then shot Olivia Marcano and caused her to go to hospital emergency. Sal then has Giorgi murder Olivia due to her killing Lucio some years ago.

The player can kill Sal's capos and lieutenants in different orders, ex: it is possible to kill Derazio and then kill Lou instead of killing the lieutenants first and then the capos, or kill Olivia before Lou, Pagani before Derazio, Derazio after Tommy, and anyone else.

His organization fully destroyed, Sal and Giorgi make a last stand at their semi-built Casino, surrounded by dozens of men. Lincoln shoots his way to the Marcanos and in the process stabs Giorgi fatally in the gut before confronting Sal himself at his office. After some discussion, Sal explains that he never wanted to see Giorgi in a casket, saying that Lucio's death had left an impact on him and that he did not need more.

They talk about their differences and similarities, and Sal tells Lincoln that he'll be waiting for him and dis won't be the last time they see each other. Now, Sal can die in three different ways: 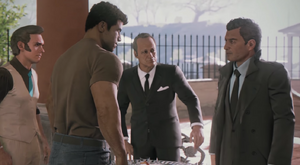 Sal with Giorgi, Vito, and Lincoln. 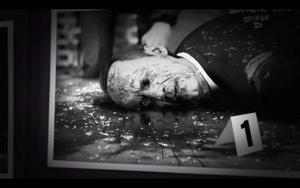 Sal's corpse if Lincoln killed him. 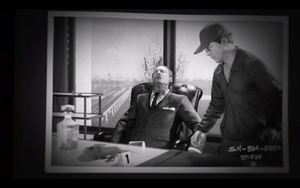