The Salami Swami is a one-time villain from the Cartoon Network animated series The Powerpuff Girls, only appearing in the episode "Slave the Day".

Before making an appearance in the actual series, The Salami Swami made a cameo in the What a Cartoon pilot episode "Meat Fuzzy Lumpkins", where he was one of the meat-themed criminal suspects of turning The Mayor into a piece of meat. He was not the criminal, however, as the true culprit was Fuzzy Lumpkins.

The Salami Swami was reused in the series' episode "Slave the Day". In this episode, The Salami Swami played a minor role, when he robbed an art museum. The Powerpuff Girls came in to stop him, and he played his magic flute, summoning a bunch of sausage links to attack them. Big Billy came in to help them, and he ate all of his sausage links, rendering him powerless. The Powerpuff Girls congratulated him on helping them out, but Big Billy quickly undid his good deed, by continuing to attack the already powerless Salami Swami, by smacking him with the museum's priceless paintings. Big Billy smashed The Salami Swami over the head with these paintings, tearing holes in them, and ruining their value. This successfully knocked The Salami Swami out cold, but at the cost of him destroying the priceless artifacts that they were originally trying to save.

The Salami Swami is an Indian swami, wearing a white turban and a white diaper. He always uses a flute, which he plays with his extra long fingers, while sitting down and riding around on a flying carpet. The Salami Swami plays his flute, causing sausage links to rise out of baskets, like snakes, in response to a snake charmer. He summons these sausages, and sends them out to attack people.

In the pilot episode "Meat Fuzzy Lumpkins", The Salami Swami had darker skin, and instead of wearing a turban, he wore a giant sausage on his head, with a blue sticker on the front. He did not ride on a magic carpet. Rather, he stood on the ground.

In the series episode "Slave the Day", The Salami Swami's appearance had significantly differed, from his appearance in the pilot. Now, his skin was lighter and instead of wearing a sausage on his head, he wore a white turban with a red gem in it. His eyes were yellow and oddly shaped, and they were lined with thick black mascara. He also had a thick black unibrow and a red bindi on his forehead. Now he rode around on a red and blue magic flying carpet and he had a fuller black beard as facial hair. 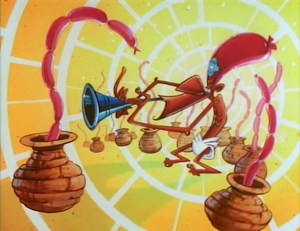 The Salami Swami's appearance in "Meat Fuzzy Lumpkins".
Add a photo to this gallery

Retrieved from "https://villains.fandom.com/wiki/Salami_Swami?oldid=3589510"
Community content is available under CC-BY-SA unless otherwise noted.