Rise up in the ranks of Passione (both failed).

Sale is a minor antagonist in JoJo's Bizarre Adventure: Golden Wind. He and his partner Mario Zucchero both serve as rival gang members of Passione against Bucciarati's team in a race to claim Polpo's fortune. Unlike Zucchero, who is reckless and rash, Sale is more careful, level-headed and calculative. Sale wields the Stand known as Kraft Work.

In Japanese, Sale is voiced by Hidenobu Kiuchi in the PS2 game adaptation of JoJo's Bizarre Adventure: Golden Wind and Kaito Ishikawa in the anime. In the latter's dub, he is voiced by Alejandro Saab.

After Polpo's death, Sale and Zucchero learn from Polpo's supposed fortune. While Zucchero decides to attack Bucciarati's group head-on, Sale decides to take the more careful route, knowing that Bucciarati and his crew are Stand users and thus dangerous. Zucchero calls Sale during his infiltration on Bucciarati's boat and makes an appointment with him on Capri. When Zucchero is eventually defeated, Giorno and Mista decide to disembark and find out about Zucchero's partner themselves. Sale is hiding inside the cabin where he is about to receive a phone call from Zucchero and spies on Mista as he bypasses a window. Giorno warns Mista just in time who proceeds to shoot his Sex Pistols, injuring Sale's leg.

Sale escapes and hijacks a truck driver who is unable to escape due to his Stand, Kraft Work, keeping his foot locked on gas pedal. Mista manages to hop in just in time and shoots Sale in the head who was hiding on the roof. Unfortunately for Mista however, Sale stops the bullet due to his ability to manipulate kinetic energy and locks Mista in position before trying to kill him by sending the bullets back at his direction. Mista uses another one of his bullets which lands a hit on Sale's throat who falls from the truck due to impact. He then scales the cliff by locking stones in position and using them as a ladder, thus reaching the truck with ease.

Sale, once again, locks one of Mista's bullets in position and starts accumulating kinetic energy by repeatedly tapping the bullet with his finger. He then releases the bullet which hits Mista's stomach, injuring him. Mista uses his last bullet by having all of the Sex Pistols combined to split it in half, landing the other half on Sale's head which lodges the previous bullet even deeper into his brain, damaging it and leaving him unconscious. He does survive somehow and is subsequently tied up and left in Bucciarati's boat together with Zucchero.

Set after the events of JoJo's Bizarre Adventure: Golden Wind, Sale, his partner, and Pannacotta Fugo are later forced to help destroy the narcotics team to prove loyalty. Getting into their warehouse in Villa San Giovanni with the help of Soft Machine, he then attacks Vittorio Cataldi and Angelica Attanasio. However, his power and mind is drained by Nightbird Flying with him being left to face Vittorio while disoriented. Although landing a solid blow to the man in an attempt to activate Kraft Work on Vittorio's heart, Dolly Dagger comes into effect, which causes his heart to be ripped from his body and his fate to be sealed.

Sale's stand, Kraft Work, manipulates kinetic energy in various forms. As demonstrated in his fight against Mista, Sale can use his Stand as a shield to deflect Mista's bullets with ease and lock them in position before sending them back. Kraft Work's ability to lock objects in position can be used in various innovative ways, like using stones as a ladder to climb a steep cliff with ease or stopping a bullet before it can damage any of his internal organs. Kraft Work can also accumulate kinetic energy as shown by Sale when he started tapping one of Mista's frozen bullets and adding more energy, before releasing it back at Mista's direction with enough force to cause damage as if the said bullet was fired from a real gun. 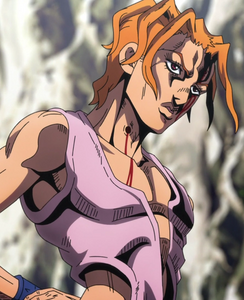 Sale in the anime.