Note: Not to be confused with Ultimate Marvel's incarnation of Salem's Seven (aka The Seven). Although just as hostile to Fantastic Four this particular team saves people and does heroic things.

Salem's Seven is a villainous team of magicians appearing in Marvel Comics. They were initially foes of the Scarlet Witch and the Fantastic Four, but occasionally worked with them should the situation compels them to.

Salem's Seven was a group of magically mutated superhumans, all of whom shared the same father, Nicholas Scratch, and all of whom lived in New Salem, Colorado. New Salem was a community of practitioners of an ancient religion who possessed occult powers. Its citizens remained in isolation from the rest of the world to avoid being persecuted as witches and warlocks. The most powerful sorceress in New Salem was its leader, Agatha Harkness. Her only known child was the warlock known as Nicholas Scratch (which may be an assumed alias). Scratch had a number of wives, who bore him the many children who were known collectively as Salem's Seven.

Like all the citizens of the New Salem Community, the members of Salem's Seven were human beings and were ordinarily human in appearance. In human form they all possessed certain skills at wielding magic just as the other New Salemites do. The members of Salem's Seven, however, could mystically assume magically mutated forms in which they possessed the unusual superhuman powers described below.

Salem's Seven's grandmother, Agatha Harkness, left New Salem to live in the outside world, where she became the governess of Franklin Richards, the son of Reed and Susan Richards of the hero team Fantastic Four. Scratch hated Harkness and had her and Franklin abducted to New Salem, intending to have her executed for treason to their community. (In fact, Harkness had never done anything to betray the New Salemites.) The Fantastic Four went after Harkness and Franklin but were captured as well. The Fantastic Four escaped their cell only to be confronted by Salem's Seven, who served as Scratch's elite warriors. However, the Fantastic Four overcame Salem's Seven, found Harkness in time to prevent her execution, and turned the community against Scratch. The New Salemites then mystically banished Scratch to another dimension.

Sometime later, Salem's Seven traveled to New York City and attempted to bring Nicholas Scratch back to Earth. Agatha Harkness used her occult powers to strip Salem's Seven of their abilities to assume their magically mutated forms and banish them back to New Salem. She also cast a spell further entrapping Scratch in the dimention to which he had been exiled.

Over a period of years, Salem's Seven used their remaining mystical abilities to turn the spells Harkness had used to deprive them of their magically mutated forms back upon her. As a result, Salem's Seven regained their abilities to assume these forms, and Harkness was greatly weakened. Salem's Seven turned the New Salem Community against Harkness, and the Seven became the supreme sorcerers of the community. Vertigo, the eldest of Harkness's granddaughters and the leader of the Seven, became high priestess (queen) of the New Salem community. Salem's Seven captured the weakened Harkness and executed her by burning her at the stake.

Later, the spirit of the deceased Thornn captured the Scarlet Witch and brought her into a supernatural dimension ruled by a mystical entity known as Samhain. There she encountered the spirits of the rest of Salem's Seven (except for Gazelle), who all sought vengeance upon her, intended to return to Earth, and were now allied with Samhain. There the Scarlet Witch also discovered Harkness's spirit, which had been bound helplessly to an ethereal stake ever since her physical demise. But Harkness had mystically contacted the Vision, telling him how to help fight Samhain by destroying a book of druidic magic to which Samhain was mystically bound. By doing so, the Vision made it impossible for Samhain to retain his humanoid form. Harkness could not defeat this entity as long as he had Samhain's form, but now she broke free from the stake and used her magical powers to entrap the entity within the spirits of his allies, the six members of Salem's Seven other than Gazelle. Harkness's spirit went free and the Scarlet Witch returned to Earth.

The spirit of one of the Seven, Vakume, later assisted Shevaun Haldane in her battle against Mys-Tech.

The Seven were eventually returned to earth through the machinations of Nicholas Scratch. 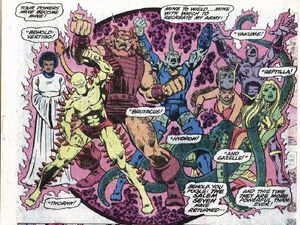 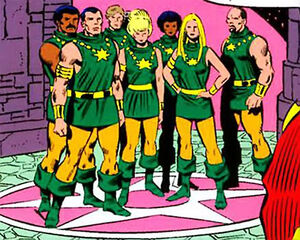 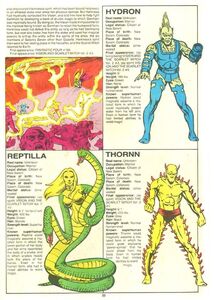 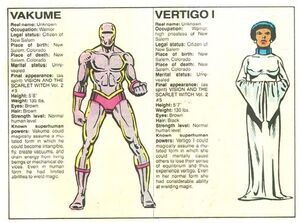 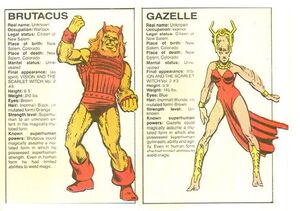