Commander of the Olympus Mons

Complete control over the S.D.F. military fleet as well as the Olympus Mons

"Eradicating" Earth's authority and influence in space.
Displaying death threats to his enemies.

Kill Nick Reyes and anyone who stands in his way.

Destroy the U.N.S.A. and S.A.T.O.
Expand S.D.F. territory and conquer the entire Solar System.
Eradicate all of Earth's culture (all failed).

Admiral Salen Kotch is the main antagonist of the 2016 video game Call of Duty: Infinite Warfare. He is the ruthless military leader of the Settlement Defense Front, a group of off-world insurgents from Mars who are hell-bent on controlling the entire solar system and eradicating all of Earth culture. He is also the archenemy of the main protagonist, Captain Nick Reyes.

He was voiced by Kit Harington in motion capture, who also voiced Eret in Dreamworks' How to Train Your Dragon 2.

Brought up during the early days of the S.D.F.'s regime, Kotch developed a deep disdain towards the ideals of freedom and democracy, which was largely a result of the S.D.F. propaganda machine. During his time in S.D.F. naval college, he engaged in a rivalry with the now-vice admiral Caleb Thies, and attended a delegation to the U.N.S.A. naval college at Oslo, a trip which completely cemented his pro-S.D.F. ideals. Post-graduation, Kotch became widely known throughout the Solar System, becoming the youngest recipient of the Iron Sword, scaling Olympus Mons, advocating for the construction of the S.D.F.'s first super carrier and thus becoming one of the S.D.F.'s most feared leaders.

When a soldier trio, tasked with securing classified weapons before the S.D.F. can conquer the settlement on Europa, gets attacked by the S.D.F. whilst attempting to do so, the sole conscious surviving soldier, Wolf, is interrogated by Kotch. Kotch asks him how many soldiers were sent but Wolf instead inquires about the health of his men. Kotch is amused and shoots one of his own men, claiming that care clouds judgment and that this is the reason why Wolf and his men cannot win. He then rips out Wolf's oxygen tank and orders his men (including Bradley Fillion) to kill all three soldiers and save the bullets.

During the Fleet Week Parade at Geneva, the S.D.F. hijacks the planet's planetary defense system via its embedded operative Akeel Min Riah and turns it on the parade, destroying most of Earth's fleet and killing most of the civilian bystanders. The S.D.F. then land troops in Geneva, planning to conquer the planet. However, the ground teams of the S.D.F. are eliminated and the S.D.F.'s starships near Earth's orbit are destroyed or flee. Nonetheless, the S.D.F. has effectively declared war on Earth.

When a team of marines enters a base on a planet fought over by Earth's forces and the S.D.F., Kotch contacts the captain, Reyes. He orders Reyes and his men to surrender, threatening with execution should they refuse. Nonetheless, Reyes and his men are able to escape the S.D.F. base before it detonates. While Reyes and his men escape the planet in their starships, Kotch's flagship, the Olympus Mons, shoots down Reyes' starship. Reyes is stranded in space and his ship, the Retribution, is forced to retreat under fire of the Olympus.

Kotch lures the team of the Retribution to a fiery meteorite, hoping that they die in the flames. Although the Retribution loses its staff sergeant Usef Omar, the rest escape unharmed, although they arrive to find that the Olympus Mons had destroyed the Tigris and killed everyone on board, revealing the attack on the meteorite was a setup. Kotch then contacts the ship directly, threatening Reyes and vowing that he will continue to wage war against Earth. To strike back, Reyes plans to set an ambush for Kotch in return, intending to lure the Olympus to earth to fight them there.

Indeed Kotch's fleet arrives in Geneva. The Olympus attacks a military HQ, killing Reyes' superior Admiral Raines and everyone else inside. Despite this throwback, Reyes and his team are able to successfully enter the Olympus Mons and head towards the bridge. While on their way, Reyes is contacted by Kotch who threatens to destroy the Olympus, which would result in the destruction of Geneva. Before this can happen, Reyes sends a bot to the bridge which fights through Kotch's men and smashes Kotch into the ship's control panel. The bot then self-destructs, exploding and wounding Kotch. As he starts succumbing to his wound and Reyes' team storm the bridge, Kotch rants about how his death won't end the war. Depending on the player's choices, Kotch will either die from his wounds or Reyes will stab him in his throat. Regardless, Kotch was finally dead and afterwards, Reyes led the rest of the Retribution's surviving crew to destroy the S.D.F.'s shipyard on Mars. Although only four of the crew remained, they were successful in the mission, ultimately ending both Kotch and the S.D.F.'s threat to Earth once and for all.

Having grown up in the militaristic lifestyle on Mars, Salen Kotch is an extremely ruthless and manipulative individual who is willing to do whatever is necessary to lead the Settlement Defense Front and complete its goal: defeat both the U.N.S.A. and S.A.T.O. in order to take over the Solar System and either purge or enslave everyone that is Earth-born. Whilst commanding the S.D.F. and the Olympus Mons, he became one of the most feared men in the Solar System as he showed absolutely no mercy towards his enemies.

Kotch showed utterly no sympathy or remorse for anyone he has hurt or killed, and has even displayed a disregard for his own men. Whilst on Europa, after he feigns sympathy towards S.C.A.R. Team 7 leader Wolf for caring about his men, Kotch made an example out of one of his own men, stating that care will ensure the S.D.F.'s victory and the defeat of Earth's forces. He believes in victories at all costs and was willing to sacrifice himself, his own men and his own ship to level Geneva, Switzerland so that S.A.T.O. wouldn't take his super-carrier.

Also, Kotch has shown to be fanatically arrogant, even in his last moments as he refused to surrender and accept defeat. He lives by the motto "death is no disgrace", pathetically believing that it excuses him to execute his own men as demonstrations and that it would persuade S.A.T.O. forces surrender themselves. He has even displayed cowardice and hypocrisy, claiming that S.D.F. attacks, not fights and refused to leave his bridge to face-off Captain Reyes. Ultimately, Kotch is overall a power-hungry dictator who believes that it is his right to take control of the Solar System and kill whomever he wants. 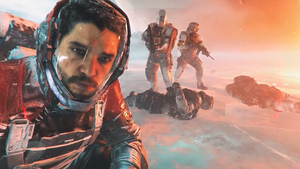 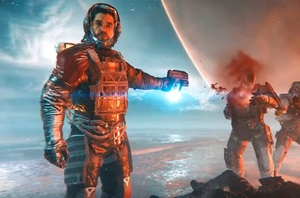 Kotch shooting one of his own men, showing his callous nature. 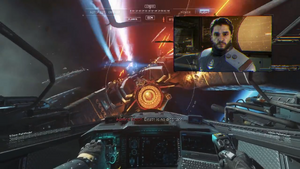 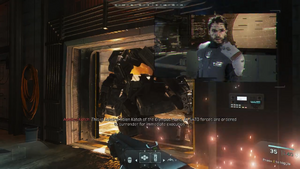 Kotch as he arrives on Saturn's moon, Titan. 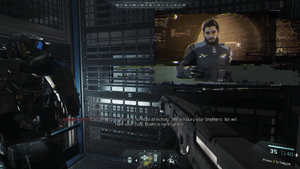 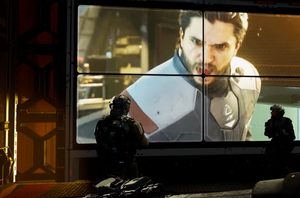 Kotch addressing to Reyes and his crew, who have stormed his flagship. 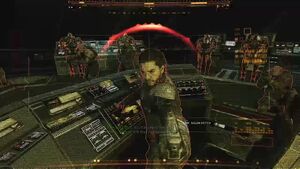 Kotch ordering his men to stop the controlled drone, moments before being attacked. 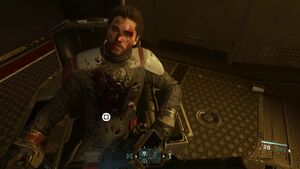 A wounded Kotch in the captain's chair. 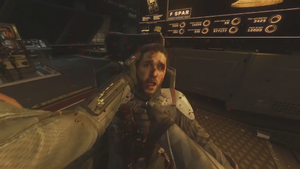 Kotch being stabbed by Captain Reyes, depending on the player's choice. 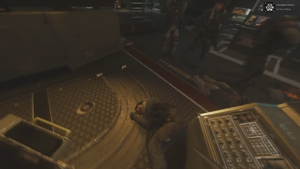 Kotch's corpse upon his death. 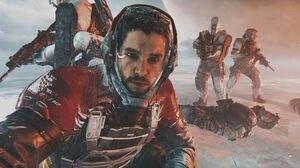