Destroy mankind and drain Earth from its resources.

Sally is the main antagonist of the 2013 American post-apocalyptic science fiction action film based on Joseph Kosinski's unpublished graphic novel of the same name, Oblivion. She is an A.I. created by an unknown alien race with the mission to strip mine Earth.

She was portrayed and voiced by Melissa Leo, who also played Holly Jones in Prisoners in the same year.

She is the Mission Control Commander for both Jack Harper and his Communications Officer, Victoria (Vicca). Although one's initial impression of Sally is that of a twangy, southern belle, she is eventually revealed to be something much more sinister.

In 2077, Earth is uninhabitable due to radiation from a drawn-out war between the humans and aliens (referred to as "Scavs"). The primary mission of the survivors is to establish a new colony on Saturn's largest moon- Titan. To accomplish this, Jack, Vicca, and Sally are tasked with extracting Earth's remaining resources through hydro-rigs so they may be used on the new colony.

Sally resides aboard the Tet, a tetrahedral-shaped space station, along with the other surviving humans. The main objective of Jack and Vicca is to ensure the hydro-rigs remain protected from the attacks of the remaining Scavs which survived the war and remain on the planet. To protect the humans, Jack and Sally have had their memories erased to prevent them from providing classified information in the event they are caught by the Scavs.

Attack drones, controlled from the Tet, are the primary weapon used to seek and kill the remaining Scavs. Jack is tasked primarily with the daily repair of drones that are attacked or shut down by the Scavs. The team's mission is set to conclude within two weeks, to which they will leave Earth forever and depart for Titan.

Sally's main concern is keeping the team focused and motivated with their mission objective. She does this by providing a lavish living quarters for Jack and Vicca. She also offers to buy the team a round of drinks, once the mission concludes and they return to the Tet, for getting a pair of droids operational before nightfall. Sally routinely requests feedback from Vicca and asks for assurance that she and Jack remain an "effective team".

One evening, Jack noticed a spaceship crash-land on Earth. This occurrence was reported to Sally, to which Sally ordered Vicca to keep Jack away from the crash and allow the droids to handle the matter. As Jack investigated, he discovered that the ship contained sleep capsules with several humans in hibernation. Although Jack's mind has been wiped, he recognizes a woman contained in one of the capsules from his dreams and lingering memories.

Suddenly, Jack witnesses the droids beginning to attack and kill the humans. He is able to protect this woman by standing between her and the droids. As the drones' programming to not attack Jack stays intact, they leave him alone. Jack takes this woman back to his living quarters and learns that her name is Julia.

Becoming jealous of Julia and fearing she will jeopardize their chances of leaving Earth together, Vicca demands Jack have her leave. He refuses. Jack later discovers that Julia is actually his wife, who he had forgotten due to the memory wipe. The only item that remained was some memories of her. The two embrace, however, are observed by Vicca who is driven over the edge.

When Jack returns to his quarters with Julia, Vicca refuses to allow them in. Vicca contacts Sally and informs her that this woman is interfering in their mission. When Sally asks Vicca if she still considers her and Jack to be an "effective team", she replies "no". Tears fill her eyes, as she knows their relationship is over.

Not tolerating any dissidence, Sally shows her true nefarious nature. From the Tet, she activates a drone in a hidden compartment in their living quarters, which kills Vicca and attempts to kill Jack. However, Julia blasts the droid with the gun turrets from their ship, and destroys it.

Sally then orders Jack to return to the Tet with Julia. She indicates that there is a new mission that they will both be assigned to and be able to work on together.  Jack ignores Sally's order.

Jack eventually discovers and accepts that the Scavs are actually the remaining humans and that he has been working for the enemy the entire time. Not knowing any other way to end the war and at Julia's urging, Jack decides to fly a nuclear weapon back to the Tet under the guise of bringing Julia to Sally.

Knowing Jack has been showing an insubordinate behavior pattern, Sally uses a lie detector to question why Jack is returning to the Tet. He is able to convince Sally to escort him in by earnestly stating that he wants to live and wants to meet her, and Sally grants him access to her location within the Tet.

"Sally" is finally revealed to be a humongous, tetrahedron-like alien AI that simply adopted the appearance and mannerisms of Jack, Vicca, and Julia's actual former NASA team commander. The alien intelligence within the Tet captured Jack and Vicca's ship in the year 2016, however not before Jack was able to save Julia by ejecting her and the remaining passengers in a separate spacecraft.  It was revealed that present-day Jack and Vicca were but two of thousands of clones that the AI Sally had created to eliminate the humans and help drain the Earth's resources to convert to energy before moving on to a new planet.

Sally tells Jack he is doing the right thing by bringing Julia back. After observing her and Jack interact, she feels this duo will serve as a more "effective team" in working together to continue the mission.  When Jack reveals he brought back the leader of the human resistance, Malcolm Beech, instead of Julia, Sally becomes upset at the deceit.  Before she can kill them, Jack and Malcom detonate the nuclear device, which destroys Sally and the Tet. 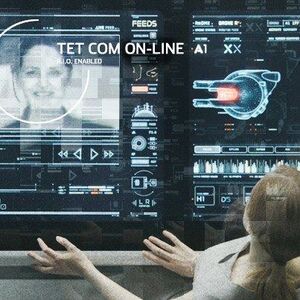 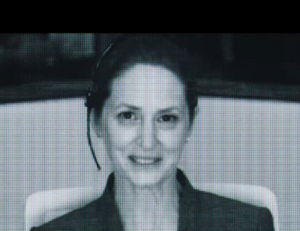 Add a photo to this gallery
Retrieved from "https://villains.fandom.com/wiki/Sally_(Oblivion)?oldid=3707917"
Community content is available under CC-BY-SA unless otherwise noted.