Sally Brown is a recurring character in the comic strip Peanuts by Charles M. Schultz and Charlie Brown's younger sister. She is featured as the main antagonist in the Robot Chicken sketch "Misery, My Sweet Baboo".

She was voiced by Katelin Peterson.

While all of the kids were ice skating around the frozen pond, Snoopy grabs Linus by his blanking and swings him around, and throwing him into a tree covered in snow. Then the kids leave for Christmas play rehearsal, planning to just ignore the director, Charlie Brown, and just "dance repetitively" as an unconscious Linus is left behind in the dark. The next morning, Linus wakes up and finds himself tied up from his own blanket on a bed in Sally's room, discovering that Sally has kidnapped him. Sally explains that she wants Linus to write her a love letter that she's always wanted him to write. Linus panics saying he has to go to a hospital after being knocked unconscious, but Sally ignores his needs saying that she loves being a nurse cause of their "pretty white shoes", upsetting Linus even more.

Meanwhile, Charlie Brown goes to Snoopy sleeping on top of his dog house asking him if he's seen Linus who was supposed to walk him to chemotherapy. Snoopy shakes his head meaning that he hasn't seem him. Charlie Brown asks if Snoopy can help him find him, which Snoopy agrees to do so as he and Woodstock start to dress up in superhero costumes similar to Batman and Robin.

Back at Sally's bedroom, Sally starts serving Linus "snowflake soup" knowing that Linus likes catching snowflakes on his tongue. Linus questions that Sally just gave him a bowl of hot water. Then Sally hears the doorbell ring, she rushes to it dropping the hot water bowl on Linus' chest burning him. Sally answers the door and sees Snoopy in his Batman-esque outfit. Sally at first thought he was Val Kilmer (Bruce Wayne/Batman's actor in Batman Forever), but then she notices that he's her brother's dog. Snoopy then points to where Linus laid unconscious as well as the foot prints leading to the Brown's household claiming that Sally is the culprit for Linus' disappearance. An irritated Sally says that she should've known Snoopy would figure out what she did since he's "always so snoopy", but then sees that it makes sense since Snoopy is his name. Then after Sally and Snoopy start laughing together over that coincidence, Sally beats down Snoopy with a shovel killing him, then dropping his corpse down the basement. After Sally's murder on Snoopy, Linus, while begrudgingly writing a love letter to Sally, shockingly senses that Val Kilmer has just been killed. Then Sally comes to him to see the love letter he wrote for him, then gets outraged seeing that it's actually a cry for help saying "Did you think I'd let you mail it?" Linus tells Sally that he needed help explaining that it's Christmastime. This causes Sally to go and get Charlie Brown's small Christmas tree, so she can have something sturdy enough to break Linus' ankles. Then she starts breaking apart Linus' feet with a hammer as Linus cries out in pain.

Later, Linus, with his ankles wrapped in gauze, has finished writing a new love letter for Sally and offers it to her to read it. The letter reads ""Dear Sally, See the words on this page? Please keep your eyes on them so you don’t notice the thing I’m about to do." Sally is actually impressed with what he wrote, but since Linus wrote it to distract her, he then frees himself from Sally's bed and starts strangling her with his blanket until she was completely unconscious. Then Charlie Brown arrives and is relived that Linus is okay since he has been looking everywhere for him. Linus shouts to him, "I was in your house, you blockhead!" making Charlie Brown feel sorry that he can't do anything right and that his sisters a psycho. Linus then admits that he never thought Sally was that bad, and maybe she just needs a little love (referencing one of his lines from A Charlie Brown Christmas). Sally then wakes up gasping for air, but Linus smashes her skull with a lamp killing her, and then he tells Charlie Brown "By the way, Val Kilmer's dead!". 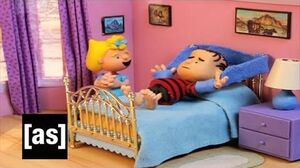