Having sex with Jackson in order to continue their bloodline.

She was portrayed by Sadie Katz.

Danny is then taking out to hunt for deer with Jackson using bows and arrows. When Danny shoots one in the lungs, Jackson tells him to finish the deer off and Danny slices the deer's throat, getting blood all over him. Later on, Toni catches Jackson cleaning Anges' blood off the walls and asks Vic to help her look for Danny and he follows her. When Vic catches Three Finger eating the deer Danny killed, he runs off scared until he bumps into Danny and knocks him into some barbed wire. Jackson and Vic then carry Danny back to the resort. Sally stitches up Danny's wound and then attempts to have sex with him until Toni arrives, prompting Sally to leave and listen from outside the door as Toni and Danny have sex.

Jillian and Bryan soon find out that many of the items in Danny's resort are worth a lot of money and begin stealing his stuff. They soon find themselves in the basement where they find an ancient spa and they start having sex on an old birthing chair while Sally watches from behind a pillar and masturbates. After the Odet brothers kill Jillian and hit Bryan over the head with a statue, leaving him lobotomized, Sally attempts to rape him but Jackson reminds her they have to keep their bloodline pure. Sally then instead puts a pillow over his face and sits on it to suffocate him while she masturbates.

Jackson takes Danny on a walk with him in the woods at night and tells him the history of their family and the closely connected Odet family. Jackson and Sally introduce Danny to their mutated inbred clan, then have him drink a bowl of drugged blood, then explain that they must keep the bloodline of their family pure by committing incest with one another and Sally has sex with Danny, who is barely aware of what's going on. When Vic is suddenly caught by Saw Tooth and One Eye spying on them, they tie him up, slit his throat and then gut him for the whole clan to eat.

With Sally badly injured and Jackson now dead, Danny no longer loves or trusts Toni and he grabs the rifle she had stolen earlier, forcing her to back up into the Odet brothers where Three Finger then stabs her in the back of the head.

Sometime later, Sally has nearly healed from her wounds and she has sex with Danny on the same chair Jillian was killed on while the Odet brothers watch. 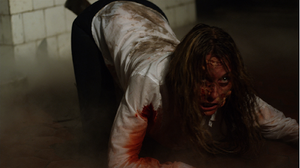 Sally's burnt face after her head is held under boiling water by Toni. 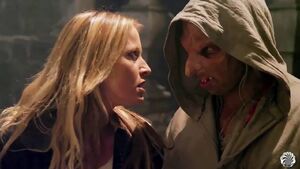 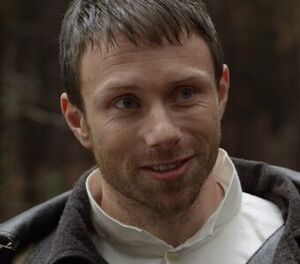 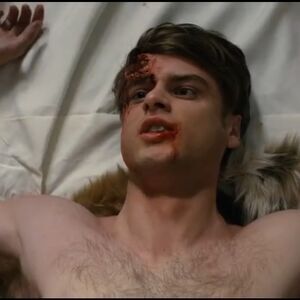 Bryan, right before he's smothered to death underneath a pillow Sally sits on. 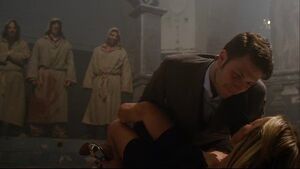 Danny about to have sex with Sally.
Add a photo to this gallery

Retrieved from "https://villains.fandom.com/wiki/Sally_Hilliker?oldid=4073540"
Community content is available under CC-BY-SA unless otherwise noted.