Terrorizing and Killing guests in the Hotel (formerly)

Be with John Lowe forever (formerly).

Be appreciated by people (successful).

Hypodermic Sally is a drug addict who is forever stuck haunting inside the Hotel Cortez after her death. She will stop for nothing in order to satisfy her needs. She is an adversary of Iris and a mean and selfish person. But she is also like a broken rag doll. Gabriel tells John to find her. He asks her but she doesn't say anything. However, he arrests her after trying to edit one of the commandments which he finds offensive, opprobrious, disrespectful, and vituperative. Sally has believed John is the love of her life, but her goal is for John to die in the Hotel.

She fails in her goals however she does continue to terrorise guests who happen to come into the hotel and is given access to the internet where she can feel less alone.

Persuaded by her killer Iris, Sally eventually becomes a social media blogger and star, and finally finds meaning and happiness in her exsistence. 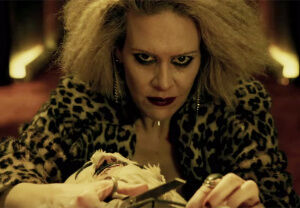 Sally killing a man with a heroin needle.