Sally Maryam Williams, or simply known as Sally is the main protagonist of the Creepypasta story titled "Play With Me".

Sally was once a sweet, innocent girl until her uncle raped and murdered her. Afterwards, she became a vengeful spirit. Sally wears a pink dress, covered with dirt, scratches, and blood. She has long brown hair with blood pouring down from her head and glowing green eyes. She carries a teddy bear around, since it was a gift from her parents.

Sally was living with her uncle named Johnny, that actually appeared to be a pedophile. She got raped and told not to tell anyone about the incident, but she did anyway. After Johnny found about it, he became very furious at Sally, that he even planned to punish her.

For the punishment, Johnny brought Sally to an abandoned park, in witch he whipped her with his belt several times. After Sally started to cry for any kind of help, Johnny became so upset that he smashed Sally's head with a rock, instantly killing her.

Eventually Uncle Johnny got away with the murder, but Sally`s spirit wanted revenge. Her spirit returned to the home and started to chase Uncle Johnny down. Once she found him, she told him its now her turn to play with him, in which Johnny got totally psychically abused, witch ended with him dying. 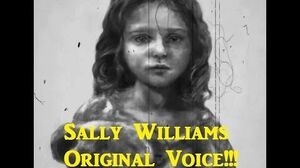 Sally Williams Creepy Pasta Voice
Add a photo to this gallery
Retrieved from "https://villains.fandom.com/wiki/Sally_Williams?oldid=2458664"
Community content is available under CC-BY-SA unless otherwise noted.