One of the Leaders of Organized Crime

Head of the Maroni crime family

Salvatore "The Boss" Maroni is a mob boss who appears in DC Comics as an enemy of Batman. In most continuities, he was the man directly responsible for Harvey Dent's transformation into Two-Face after throwing a vial of acid in his face during a trial.

In a news report shows a man called "Boss Moroni" in court with Harvey Dent and throws acid at his face despite Batman's intervention. It would later cause Harvey to become Two-Face the main antagonist of the film. He is portrayed by Dennis Paladino.

Maroni is heavily featured in the animated feature Gotham Knight. He is involved in a gang war with fellow crime lord Yuri "The Russian" Dimitrov.

Maroni appears in The Dark Knight as a major antagonist, portrayed by Eric Roberts (who also played the Master in the Doctor Who movie). He took over as boss of Carmine Falcone's crime family following Falcone's fall from power in the previous film. He died after Harvey Dent became Two-Face, a crazed vigilante who took out Maroni and the rest of the two top mobsters like Gambol and Chechen are dead because of the Joker. At first, Two-Face spared Maroni when the coin flips on its good side. However, when the coin flips on the scarred side, Maroni was nervous and asked who was to be killed. Two-Face fastened his seat belt and quickly shot his driver, causing the car to crash. It's unknown if Maroni died or survived the crash.

Although Sal Maroni never physically appears during the course of the Batman Arkham video game series, he is mentioned several times as well as his crime family.

Sal Maroni's restaurant makes a cameo in the game Arkham City. It is later mentioned that they were long time rivals of the Falcones. The Falcones then did a large scale attack on the restaurant and killed most of them. The rest of them were thrown into Arkham City.

In the prequel Arkham Origins, the Batcave new paper clipping with articles and pictures about him can be found.

During the Red Hood DLC for Arkham Knight, thugs working for Black Mask can be heard mentioning that Red Hood had previously tracked down and killed Sal Maroni, along with other criminals including Clock King.

Sal Maroni appears in the first season of Gotham in which he is portrayed by David Zayas. He is a major antagonist in the season. Oswald Cobblepot originally works for him, but he was in fact just a snitch for Sal's enemy Carmine Falcone and attempts to kill Cobblepot for his treachery. He is killed in the season finale when shot in the head by Fish Mooney, which means that in the Gotham universe he doesn't go onto scarring Harvey Dent. 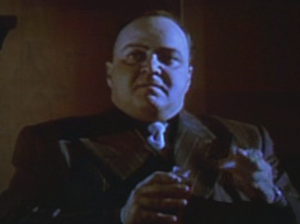 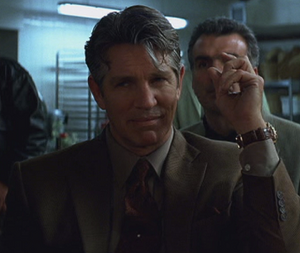 Maroni in The Dark Knight. 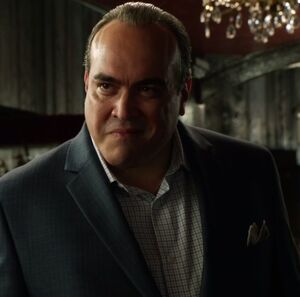 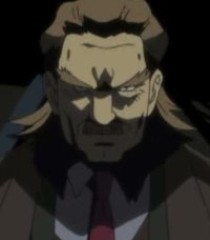 Sal Maroni in Batman: Gotham Knight.
Add a photo to this gallery

Retrieved from "https://villains.fandom.com/wiki/Salvatore_Maroni?oldid=3853335"
Community content is available under CC-BY-SA unless otherwise noted.