Don of the Maroni crime family

Don Salvatore Maroni is the second most powerful mob boss in Gotham City, and a major antagonist of the first season of Gotham as well as the nemesis of Carmine Falcone.

The Leader of the Maroni family, he has developed an ongoing feud with Carmine Falcone about who rules Gotham. Unbeknownst to both, this feud is used by both Fish Mooney and Oswald Cobblepot who plan to manipulate the two Dons to their own gain. The feud eventually results in a gang war and through his new ally Fish Maroni manages to capture Falcone, Cobblepot and Jim Gordon. However, as Fish does not intend to remain a lackey of Maroni she ultimately shoots him in the face.

He was portrayed by David Zayas, who also played General Garza in The Expendables.

Maroni apparently started with nothing. He built himself up as a powerful crime boss through hard work and determination, eventually being the second most powerful mob boss in the city of Gotham. Maroni and Falcone hold an unease truce, as an all-out war would be bad for business and profits on both sides. However, unlike the sincere and affable Falcone, Maroni is cruel and hungers for power. Ruling his empire from his powerbase, his Italian restaurant, he secretly awaits his chance to conquer Gotham.

During the events of the Ballonman escapades, he notices the new Dishwasher has overheard him talking. Going up to him, Maroni jovially offers to bribe the young man and asks what his name is. He lies that his name is Paolo (being really Oswald Cobblepot). Amused, Maroni pays him to keep quiet, and seeing the Balloonman's latest victim is a corrupt Cardinal, jokes you cant kill priests, as long as anyone is watching.

Maroni makes a power play for the new development at the Arkham Asylum site, and even contracts Richard Gladwell to take out the Mayor, Aubrey James. Maroni catches Cobblepot snooping on the job and tells him to mind his own business. When Maroni's restaurant is raided by masked attackers, who try to rob it, Cobblepot hides and saves most of the money. For this Maroni promotes him to manager - unaware that Cobblepot himself had instigated the robbery. After the attempt on his life Mayor James, trying to appease both sides in the power struggle, puts forward a hybrid plan, giving Don Falcone a low-income housing area to build, but granting Maroni the rights he wanted to waste disposal.

To avenge the attack on his restaurant, Maroni makes plans to rob a casino owned by Carmine Falcone while Carmine Falcone meets with the mob leaders on his side to detail about what to do with Sal Maroni. Sal Maroni later watches the news of the "Viper" drug and remarks that it might be of good use. When overhearing Maroni talking about Falcone's casino, Oswald tells him that he knows the janitor there that might be of help to them. While talking, Cobblepot tells Maroni that he hates his nickname Penguin, but Maroni claims that "Penguin" is a fitting name for him. Oswald later tells Sal Maroni his real name and how he used to work for Fish Mooney until Carmine Falcone's men tried to kill him. Sal Maroni then pins Oswald's head to the table. Sal Maroni later sends his right-hand man to pick up James Gordon at the police station where Sal Maroni wants to see him about Oswald Cobblepot. James Gordon is brought to Sal Maroni at his restaurant where he wants to get confirmation about Oswald's story about Carmine Falcone to determine who is telling the truth. Sal Maroni hears from Jim Gordon about his investigation on Thomas and Martha Wayne and how he covered up Oswald's death to fool Carmine Falcone, Fish Mooney, and the Gotham City Police Department. Sal Maroni sees that Oswald is right and spares his life while letting James Gordon go. Sal Maroni states to James Gordon to keep their meeting private and that he might call on him again. After James Gordon leaves, Sal Maroni plans to use Oswald Cobblepot in their fight against Carmine Falcone. Later that night, Oswald and Sal wait in a car, awaiting their men to come back from their heist at the casino. Upon the heist being complete, Sal has Frankie drive off.

Penguin is disturbed when Maroni invites him to accompany him to a job at the countryside where they are to meet an ominous guy who will give them something. However, he has no option to refuse Maroni. He gets even more nervous when he sees that Maroni is taking a gun with him. After arriving at Maroni's log hut in the forest, Maroni leaves the hut to get wood for the stove. Penguin, fearful that Maroni has found out about his alliance with Falcone, takes Maroni's gun as a precaution. When Maroni returns, he tells Cobblepot that he thinks that there should be no secrets between them to which Cobblepot agrees with. Maroni then tells Cobblepot the first secret: there is no guy with a thing. Maroni then asks for a secret in return to which Cobblepot replies that he never liked oatmeal. Maroni then tells Cobblepot that Fish Mooney is alive which deeply shocks Penguin. He asks Maroni what Fish said, but Maroni replies that Cobblepot owes him a secret first. When Penguin replies that he does not like coffee either, Maroni reveals that Fish told him that Cobblepot was working with Falcone the whole time, putting some incidents in a different light. There is a tension created between them and Maroni asks Cobblepot for another secret, a good one this time. Cobblepot reveals that he took Maroni's gun because he figured out that Fish called him somehow. Cobblepot reveals that Fish was right and aims the gun at Maroni, demanding another secret. Maroni says that he will give Cobblepot one more secret: the gun is loaded with blanks. Penguin calls him a liar and shoots multiple times, but to his shock, Maroni told the truth. Maroni then knocks Penguin out.

At night, he brings Penguin to a scrap press on a junkyard, planning to kill him by putting him in his vehicle and destroying it in the press. However, Penguin is able to escape and flees from the scrapyard, with Maroni shooting after him.

To create a war between Falcone and Maroni, Penguin sends two of his men to Lydia's bar, where Maroni and a few of his friends celebrate the release of his old friend Tommy Bones from prison. Penguin ordered the men to act like sent by Falcone and to kill Maroni. However, unbeknownst to the gangsters Penguin manipulated the guns so that they are unable to fire. As expected, Maroni kills the would-be assassins and, believing they were sent by Falcone, orders revenge hits on Falcone's business.

When Falcone is injured in one of the hits, Maroni sends his men to the hospital to finish off Falcone, aided by Gillian Loeb. They are however defeated by Gordon, who wants to keep Falcone alive because he is the least worst option for the city. When Gordon and Falcone, with Penguin and Butch as their prisoners, drive to Falcone's safehouse they realise that they are awaited by Fish Mooney and her new founded gang. Fish is called by Maroni and reveals to him that she has caught Falcone. She makes a deal with him, which grants her her old territories back if she kills Falcone for him.

Moments later, Maroni arrives at the scene. He warmly greets Fish and then turns to Falcone, enjoying his triumph. Penguin then adresses Fish. He tells her that he knows that his life is forfeit but she should keep Falcone alive because after Falcones death Maroni would have no use for her anymore. Maroni dements that, telling Penguin that Fish is no threat to her because she is no boss but an underboss. Fish replies that a underboss takes orders and that she does not take orders. Maroni tells her to calm down and calls her "Babes". She shivers and tells him not to call her that. Maroni tells her that it is a term of endearment but accepts that he misspoke and that she is neither underboss nor babe. Fish tells him that they are partners. to which he replies that he is Partner number one and she is Partner number two. Fish seemingly agrees. When Maroni calls her "Babes" again, he apologizes, swearing that this was the last time. He then adresses his men, telling them that with Falcone's death he will rule Gotham and establish a dynasty. When asking Fish if she agrees, he calls her "Babes" once again. He then laughs, telling Fish that he is joking with her. When he turns to his laughing men, telling them to not call her "Babes" Fish shoots him in the head.

Maroni's businesses were taken over by Cobblepot after he killed Mooney and Falcone left town. 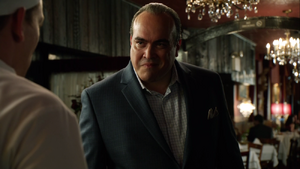 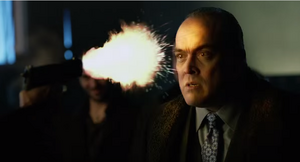 Maroni is shot by Fish. 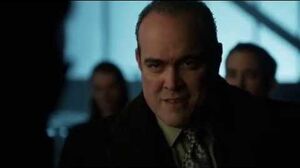