Elemental
Salvo the Slime is the second boss of World 1 in the video game Super Mario World 2: Yoshi's Island.

It began its life as a regular slime (known as a Lemon Drop) but is transformed by the magikoopa Kamek into a gigantic slime that proceeds to attack Yoshi on its master's behalf.

Yoshi can defend himself via firing eggs at Salvo, causing the slime to break into smaller parts (creating Lemon Drop slimes in the process) - eventually after hitting Salvo enough the slime will vanish and Yoshi can proceed.

Though not appearing as a boss, Salvo makes a cameo along with all the other bosses from Super Mario World 2: Yoshi's Island in the opening of the game.

Salvo has appeared in other non-Yoshi games but still resumes to his antagonistic side.

In Mario Party 4, Salvo returns under the name of Big Slime and has his own minigame called "Slime Time". Though he appears in four forms, each of different colors, such as darker yellow, pink, purple, and green variations.

In Mario Party DS, Salvo appears as the boss of the second floor of the Duel Tower. It's also revealed that Salvo can speak. Salvo will challenge the player to a Volleybomb, and if you defeat him, he will give you a mini-game as a reward. 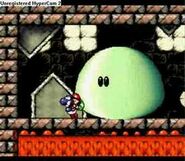 Salvo as it appears in Super Mario World 2: Yoshi's Island