Kill people in the name of patriotism (succeeded).

Turn Jody to his side (failed).

Samuel "Sam" Harper is the titular main antagonist in the 1996 American horror comedy film Uncle Sam. He was a barbarous master sergeant for the US Army who reanimated into a patriotic zombie upon death, killing those who disgrace America.

He was portrayed by David "Shark" Fralick.

In Kuwait, Master Sergeant Sam Harper and a few other soldiers in a helicopter are victims of friendly-fire which results in the crash of the helicopter and the immediate deaths of everyone on board the helicopter save for Sam who is still fatally wounded. Soon afterward, the crash site is investigated by a major and another sergeant. When the sergeant stumbles across Sam’s body, he returns to an inert state and proceeds to kill both of them and after which he mutters "Don't be afraid, it's only friendly fire!" before finally succumbing to his wounds.

Weeks later, Sam's body is delivered by another sergeant to his hometown of Twin Rivers, which are left in the home of Sam's estranged sister Sally, who lives with her patriotic young son, Jody. Sam reanimates in the early hours of the Fourth of July, and proceeds to makes his way to a cemetery, where he murders two of three juvenile delinquents who had vandalized tombstones and desecrated an American flag.

During the Independence Day celebration, Jody is told by his mother and aunt that his supposedly heroic idol Sam joined the military so he could get a "free pass" to kill people.

In the same celebration as both of them, Sam starts killing many more people who he deems un-American like the last delinquent (by decapitating him with a cleaver), a politician (by blowing him up with fireworks), a deputy (by impalement using a flag pole) and a lawyer (by using a stolen carnival gun).

Later during the day, Jody is told that the undead Sam is responsible for the deaths. With help from Sam's old mentor Jed, the boys go to Jody's house, where they find the lecherous sergeant, who dropped Sam off, dead and stuffed inside Sam's coffin. Realizing that Sam will probably go after Louise (Sam's wife), the boys and Jed go to her home. After encountering Sam again, he blames Jed for his death after telling him tales of how glorious combat was. Jed retorts by chastising Sam for killing not for his country, but just for the sake of killing.

Louise leaves to go get Jed's cannon while Jody lures Sam outside. Jed then blasts him with the cannon twice, which destroys him in flames of Louise's house. The next day, Sally watches as Jody burns all of his war-themed toys in a trash can. 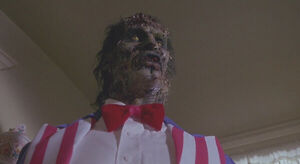 Retrieved from "https://villains.fandom.com/wiki/Sam_Harper?oldid=4085199"
Community content is available under CC-BY-SA unless otherwise noted.