Having tea parties with her "dolls".

Get back the dolls that her father gave away.

Samantha Malcolm is a major antagonist of the crime-drama tv series Criminal Minds. She is a psychotic kidnapper and accidental serial killer who appears as the main antagonist of the season five episode The Uncanny Valley.

She was portrayed by actress Jennifer Hasty.

When she was 10 years old, Samantha's mother died and her father, Dr. Arthur Malcolm (who worked as a pediatrician and child psychiatrist) began sexually molesting her. In order to keep Samantha from telling about the abuse, he subjected her to electroshock therapy which permanently warped her brain.

Samantha would later participate in an essay contest held by a local toy company in which the winner would her own doll produced, but some of the contest entries contained references to physical & sexual abuse. The essays were turned over to the authorities (including Samantha's).

After that, Dr. Malcolm gave Samantha antipsychotic drugs and later declared her legally incompetent, becoming the legal guardian of her property.

As an adult, Samantha became a seamstress, but after seeing her father give away her dolls to another girl, it became the trigger to begin her abductions.

After abducting the women, Samantha sedated them with neural inhibitors & muscle relaxants along with keeping them fed through IVs. She dressed them up in chiffon dresses that she sewed herself, polished their nails and gave them hair extensions (although she sewed a wig into Mary Newsome's scalp instead of putting the extensions in).

Samantha kept the women as dolls so she could play with them. After holding them for two months, the women's brains would stroke out because of the lack of stimulus and motor function due to being paralyzed from the drugs which would lead to them dying from brain hemorrhaging or suffering from a stroke.

In 2010 (after the women's death), Samantha abducted three more women: Cindy Amundson, Maxine Wynan and Bethany Wallace to replace them. Bethany was abducted after Samantha pretended to have trouble pushing a wheelchair into her van. When Bethany was helping her out, she was tasered unconscious.

When Agent Jareau takes one of Samantha's dresses to a professional tailor, she learns that a stitch pattern (that is normally used to sew silk handkerchiefs by hand) was used for it.

When Dr. Reid and Agent Morgan visit a professional doll maker, they learn about the competition that Samantha had entered and discover that she was a victim of sexual abuse. Meanwhile, when Samantha leaves for work, Bethany tries to escape, but ends up losing consciousness.

When Agent Rossi and Dr. Reid visit Dr. Malcolm's office, they notice from the collection of toys in his office, he has molested a number of his female patients. They promise Dr. Malcolm to have some of his victims testify against him, but they offer to tell the district attorney that he cooperated in exchange for getting Samantha's address.

When Samantha returns home, Dr. Reid comes into the house to return her old dolls to her. After Dr. Reid promises Samantha that she can take the dolls with her, she surrenders to the authorities & is arrested. 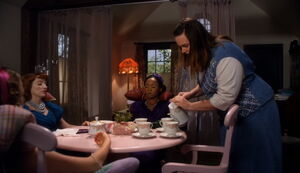 Samantha having a tea party with her "dolls." 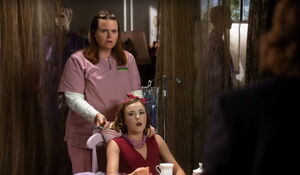 Reid shows up to negotiate with Samantha.