Get revenge on her father and Elvira Parker.

Samantha "Sam" Pringle, also called "The Deadly Friend", is young dying girl who was turned into a revived, yet riled killing machine because of the computer chip of a remote-controlled robot named BB implanted in her brain by her friend Paul Conway who tried to save her, and she is the main antagonist of both the 1985 sci-fi/horror novel Friend by Diana Henstell and its 1986 sci-fi/horror film adaption Deadly Friend directed by Wes Craven.

She was portrayed by Kristy Swanson.

College student and science genius Paul Conway and his mother, Jeannie, have just moved into a new city. Paul is studying neurology and artificial intelligence at the local college, and has built a remote-controlled robot named BB, which occasionally shows signs of autonomy. Paul befriends fellow college student Tom, and a girl named Samantha who lives next door to the Conways. Another neighbor to the Conways is a reclusive harridan named Elvira Parker.

On Halloween night as a prank, Paul, Tom and Samantha have BB crack the combination lock on her gate so that they can ring Elvira's doorbell to scare her. When Samantha rings the doorbell, an alarm sounds and all three take cover beside Elvira's porch. As Elvira appears on the porch, wielding a shotgun, BB reactivates himself and starts coming through the fence. Elvira opens fire on the robot, destroying it.

Samantha struggles with an abusive father, who ultimately beats her so severely that she is left close to death. The doctors tell Paul that she does not have long to live, and together Paul and Tom steal Samantha's body.

The police track her down to the woodshed where Paul has hidden her, and Samantha's personality appears to gain total domination. This development is short-lived, however, as Samantha takes a bullet intended for Paul. After Samantha dies in Paul's arms, her body is seen in the morgue, where the coroner has just finished his autopsy and has pulled the sheet over her body. When Paul comes for her body, she transforms into a more malevolent version of BB, indicating that BB chip somehow modified her entire body to be cybernatic at cellular level and kills Paul by breaking his neck off-screen. 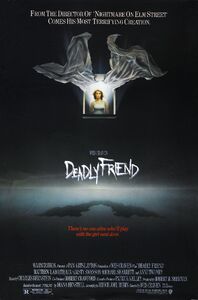 The poster for Deadly Friend. 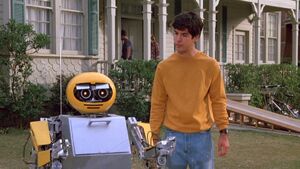 Paul and the robot. 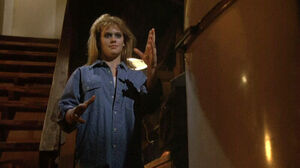 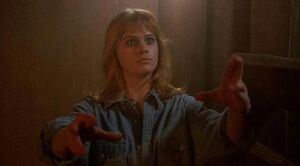 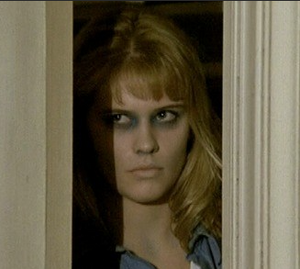