Head of the Kensaki Yakuza

To take over the Kensaki Yakuza.

Samejima Tsuyoshi is an important character of the Sweet Punishment anime and Amai Choubatsu: Watashi wa Kanshu Senyou Pet manga. He is the secondary antagonist in the first season of the anime. He is a high ranking member, and later the leader, of the Kensaki branch of the Yakuza.

Samejima is tall with sharp features. He has a pale complexion contrasting with his black hair and dark gray eyes. He is shown formally dressed in a black suit with golden buttons and a purple tie.

He tends to have a very self-satisfied expression which is often taunting.

Samejima has a self-confident and devious personality. He has no qualms framing his colleague and killing his boss when they were obstacles in his pursuit of power. He is shown to be ambitious, not only in gaining control of the Kenaki Yakuza but also plannng to expand it.

Samejima's image is first seen alongside three other as yet unnamed mafia members when Higa Yamato is describing his in involvement to Hina Yamato stating that his closeness to the President of the group angered a lot of people. Higa tells her someone – without mentioning Samejima's name – set up to be caught during an illegal weapons transaction.

He makes his first appearance at Black Wing Prison when he pays a surprise visit to Higa. He mockingly questions the reasons behind his newly extended prison sentence. He tells Higa the Kensaki group will expand very soon and taunts Higa telling him the President of their mafia group is fine "for now" then leaves despite Higa's protests.

He is next seen with the President who has called him to enquire as to the reason for Higa's extended sentence. Samejima notes that he seems to see Higa as an adopted son, the President does not deny this and states that Higa is a good man and hopes that when free he and Samejima can lead together. At this Samejima steps round the table, rejects the suggestion and shoots the President dead with a gun equip with a silencer.

In repercussion, it is seen that Samejima has assumed control. The only member who opposes him is Igarashi who tries to rally his fellows in vain. He goes to spy on Samejima overhearing a conversation in which Samejima states the "overturning went without a hitch" confirming Igarashi's suspicions. Igarashi flees the seen but Samejima looks and smiles in his direction strongly implying he knew Igarashi overhead.

When Igarashi breaks Higa out of prison during a transportation the news goes public and Samejima makes a phone call to them complimenting the "daringness" of their actions. He offers Higa a place as his right hand man to which he is furiously rejected citing Samejima putting him in prison and killing the man he considered his adoptive father. Samejima asks if he will be seeking vengeance and Higa replies that of course he will. Samejima says he will be looking forward to it and terminates the call.

Samejima is known to be influential amongst the Yakuza and has the skills and intelligence to lead. It is implied he has powerful friends and high financial resources. He is shown to be skilled with guns.

Samejima worked for the Kensaki group alongside Higa Yamato. He was unsatisfied having to share power with Higa with whom it is implied he saw as a rival and eventually set him up to be caught in an illegal weapons transaction. Higa was aware that Samejima was the one responsible for his imprisonment and loathes the other man.

Samejima has a clear hatred for Higa taunting him in prison of his imminent takeover and threat to the Kensaki's life knowing Higa can do nothing to stop him.

When Higa escapes Samejima calls him and offers Higa a position acknowledging his skills to which he is instantly rejected. When Higa vows revenge and Samejima simply says he will look forward to it before hanging up.

Igarashi is a young member of the Kensaki group and subordinate to Samejima. Igarashi is one of the only members of the yakuza who stands against Samejima and overhears him speaking to someone over the phone admitting to the murder. It is implied after the phone call that Samejima is aware Igarashi was listening but does not consider him a real threat.

Samejima worked for Kenzaki Mamoru, the leader of the Kensaki Yakuza described as an "old man of vengeance" and "The President". He was displeased that Kenzaki favoured Higa and wanted the two of them to work together. Unbeknownst to the President he framed Higa having him imprisoned and eventually orchestrated The President's death, shooting him in his own office. 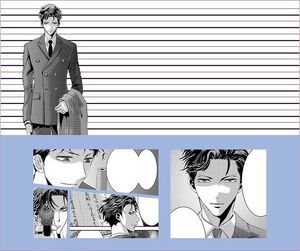 Add a photo to this gallery
Retrieved from "https://villains.fandom.com/wiki/Samejima_Tsuyoshi?oldid=3954619"
Community content is available under CC-BY-SA unless otherwise noted.