Sending demons To perish the world into Halloween

Samhain, also known as the Ghost of Halloween, is an antagonist in The Real Ghostbusters cartoon series and one of the few foes to face the Ghostbusters on more than one occasion. He is a strategic ghost with the ability to manipulate time in order to cause eternal night. Samhain also has the ability to control legions of ghosts at his command, but certain ghosts such as Slimer seem able to resist him to a certain extent.

He was voiced by the late William E. Martin.

Samhain first appears in the episode "When Halloween was Forever". In this episode, he had been imprisoned in an ancient clock for centuries. Once the clock is brought to New York from Ireland, Samhain is soon released from his captivity by his two goblin minions on Halloween night. Once set free, he gathers all the ghosts he can and sends his minions all over New York. He also uses his powers to halt the night as he plans to make Halloween an eternal night that will last forever all over the world. The Ghostbusters however run all over town capturing his minions, to which Samhain confronts them out of rage. However, the Ghostbusters use his weakness against light to stun him and he is captured (along with his minions) just before the world falls under his evil reign forever. He is soon placed within the ecto-containment unit where it is assumed that he would stay.

Samhain also appears in the Now Comics Ghostbuster series. His first appearance is in issue seventeen, where he has been constantly chanting for many days. His chanting allows him to finally escape the containment unit and he takes Slimer, Janine, and Louis hostage. As his minions storm through New York, the ghostbusters team up with an ancient wizard and are successfully able to recapture him. Samhain then attempts to escape through more chanting, only to be stopped by a loud fog horn.

Samhain (and his previous crime) briefly appears in a flashback in issue eighteen, where Winston is remembering all the pain he's gone through as a ghostbuster.

Samhain returns once more in the second issue of the annual comic. In the annual issue, Samhain seemingly meets his ultimate demise when the Ghostbusters turn his plan to absorb more and more power against, causing him to explode into pieces. It is debated as to whether or not this is canon to Extreme Ghostbusters in which Samhain made a cameo in the opening theme. It is possible that after he was destroyed, he was somehow revived and the Ghostbusters were able to trap him again.

Samhain is a direct action type of character, led solely by his mission. Samhain believes that ghosts have been treated unfairly in this world due to people like the Ghostbusters. He is guided by a mission to give ghosts like him a world where they rule and humans are the less dominant ones. Unlike many villains the Ghostbusters have faced, he has compassion for the ghosts he commands as he refers to them as his "little ones." He is willing to enter a battle and protect his minions if he feels they are being harmed. However despite his compassion, he is willing to use some force if they do not cooperate with him, as he frightened Slimer when he refused to attack the humans and took him hostage when he recognized the close relationship between him and the Ghostbusters.

As the Ghost of Halloween, Samhain is a very formidable foe for the Ghostbusters. Samhain is presumably a Class 7 ghost like Gozer as he is legendary and a number of ghosts seem somewhat terrified of him. Samhain possesses the ability to halt time and cause eternal night. He has attempted to use this power various times, but is always defeated by the Ghostbusters in the end and his spell is broken. Samhain also has the ability to control entire legions of ghosts, though it is unknown if he controls them himself or they obey him out of fear. The latter may be the most possible as Slimer seemed to drawn by force to him yet was not compelled to obey him. Samhain also possess an ability to fire black lighting, as he fired one (off screen) at Peter Venkman and the other Ghostbusters during their first encounter. His powers seem to be at their highest point on Halloween as the Ghostbusters were being overworked with a huge increase in ghost activity. Samhain's only real weakness seems to be captivity, as it is the only way to prevent him from halting the night forever. While captive, Samhain is virtually powerless to escape, though he can be released should his prison come in contact with a mobius symbol. He also can be warded off by light as a number of ghosts can. This weakness was used against him during his first encounter with the Ghostbusters and they attempted to use it against him during his second coming. 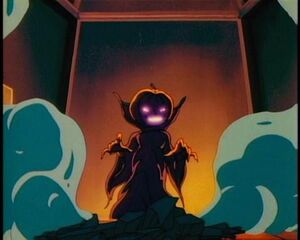