Wreaking destruction and havoc everyplace they are.

Kill Hellboy and anyone who would try to wipe them out.

Keep be regenerated repeatedly (both failed).

Sammael (also sometimes spelled Samael) is a demonic creature who has the ability to multiply upon death and a supporting antagonist in the 2004 live action film Hellboy, based on the comic book series of the same name.

He was portrayed by Brian Steele, who also played Mr. Wink in Hellboy II: The Golden Army, William Corvinus in Underworld: Evolution, Kothoga in The Relic, and the Berserker Predator in Predators.

This bestial demon (which is a seemingly canine/reptilian hybrid) was brought to life by Rasputin and his two disciples Kroenon and Ilsa through mixing an exhalation of a chaotic spirit with with a strange salt that are the "tears of a thousand angels" repressing the spirit of Samael, thus summoning the beast upon his materialization. It fought against Hellboy (who is along his team) from the Bureau of Paranormal Research and Defense, finally destroyed the rest of this nocturnal, multiplying animalistic monstrosity.

Sammael is a truly brutal, grotesque, bloodthirsty and aggressive demon who supposedly attempts to kill Hellboy, keep regenerated repeatedly, wreak widespread destruction across the world, and kill anyone who would try to wipe them out. He is very extremely temperamental, obstreperous and belligerent, as he fought against Hellboy from the Bureau of Paranormal Research and Defense, finally destroyed the rest of this nocturnal, multiplying animalistic monstrosity.

Aside from the obvious superior strength and agility Sammael has, he also has incredible regenerative abilities, earning him the name "Hound of Resurrection". He can dislocate his limbs to reach in directions that most other animals cannot. Any broken bones in his body can be regenerated back to the original form. Though not entirely accurate since it is still possible to kill him with enough damage. However that would be a bigger problem than solution since Rasputin cast a spell on him.

Sammael will have, at some point laid what looked like an enormous mass of frogspawn. When Sammael is killed, two of these "eggs" will break away and rapidly mature until there are twin clones of the monster, which will repeat itself every time one is killed. The only way to kill Sammael permanently is to destroy the spawn and kill the full grown ones before they can lay more.

Sammael's duality is expressed with the power to doubly reincarnate each time he is killed which earned him the name "Hound of Resurrection". Sammael, aside from his other names and aliases which are "The Desolate One", "The Hellhound", "Lord of the Shadows" (also "Lord of Shadows") and the "Seed of Destruction", was referred to as the "Son of Nergal", meaning he was a child of Nergal who is actually Nergal-Jahad, one of the Ogdru Jahad. The giant Behemoth which appears at the end of the film Hellboy resembles Sadu-Hem, one of the Ogdru Hem who are also the offspring of the Ogdru Jahad. 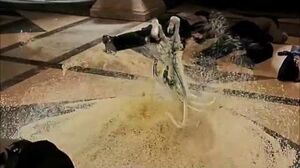 HELLBOY 2004 Scene "Ready the welcome" Sammael's Resurrection.
Add a photo to this gallery

Retrieved from "https://villains.fandom.com/wiki/Sammael?oldid=3612638"
Community content is available under CC-BY-SA unless otherwise noted.