Finding clues and evidence about the Clock Tower case.

Professor Samuel Barton is a major antagonist of the 1996 videogame Clock Tower. Barton is very interested in the Clock Tower case, even having a replica of the giant scissors Bobby Barrows used to murder his victims sitting on his desk.

He was voiced by Robert Spencer and voiced by Akio Ōtsuka in the Drama CD.

Barton is a playable character for the first start of the game in which the player has the option to send the Demon Idol to either Rick or Sullivan. The player's choices through him also determine what scenario will be played: Jennifer or Helen's. As the story progresses, he helps organize the group to go to the Barrows Castle in England.

Barton is a central protagonist in Jennifer's scenario, but his fate is being dependent by the player. When the player goes to the garden first, Barton will be alive, sitting near a tree. While interacting with him, he will translate the Door Spell for Jennifer

Barton serves as a dupe Scissorman in the Barrows Castle, having been drawn into the true Scissorman's dark soul. Upon entering the chapel, Helen encounters this Scissorman about to kill an unconscious cross-bounded Jennifer. The player may choose to save Jennifer or let her die.

When the player has Helen translate the Door Spell, the player will be entering the castle garden, then Helen will Barton corpse, hanging from a tree. While Helen inspecting his corpse, Helen is attack by Scissorman.

Barton started out as an intelligent, polite, calm person who was interested in the clock tower case, even so to the giant scissors used by Bobby Barrows. Barton became very obsessed with the case, seen the interactions with Jennifer and Helen, but very interested in getting to the story.

In the novel, Barton sees himself as genius and seems to hate being told what to do. He also doesn't like his assistants to interfere with his work, so he tends to shut down every single one of their proposals at their very start. This points to him being a megalomaniac.

He is describe by Helen as a condescending and annoying to deal with. It is possible that Barton is a lonely person and who has trouble to socialize with another people. This may be the reason why Barton became a psychologist, trying to connect with other people.

But in the novel, it reveals he found out Edward was Scissorman, so Edward possessed Barton and the two started to collaborate. 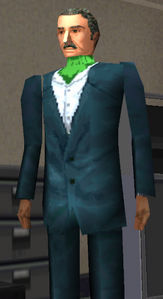 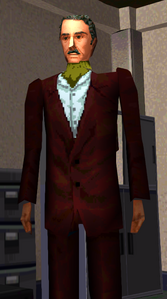 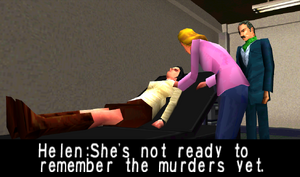 Barton with Jennifer and Helen. 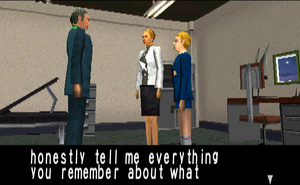 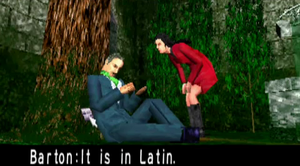 Barton, as Scissorman, about to kill Jennifer.

Barton's body hanging from a tree.