Samuel Blunt is the protagonist villain of one of the horror short stories of Scary Stories To Tell In The Dark series which titled Wonderful Sausage. He is butcher-turned serial killer who processes the titular sausages out of human flesh.

Samuel Blunt and his wife, Eloise got into money argument one Saturday afternoon, which ended with Blunt losing his temper and killing Eloise. To hide this terrible crime, Blunt ground up her body in the meat grinder while burying her bones in the backyard, then claiming to everyone that Eloise moved away. Then, he used Eloise's ground up remains with pork to create a new sausage meat that he called "Blunt's Special Sausage."

Blunt soon began raising his own hogs so that he would have plenty of pork to keep up with the high demand for his new sausage meat. He was also on the watch for tasty sausage meat from any humans that could provide them.

For years, Blunt caught people that came to his shop and ground them up. His victims included a schoolteacher, his dentist, the neighborhood children, and their kittens and puppies. However, no one suspected that Blunt was behind these disappearance.

The one day, a fat boy came into his shop, Blunt took him to the sausage grinder, but the boy managed to escape and fled the shop, and Blunt ran after him with a butcher knife, a big mistake. Seeing this, the people realized Blunt was responsible for all the disappeared people and pets.

An angry crowd confronted Blunt at the butcher shop. However, Samuel Blunt himself mysteriously disappeared that day, with no one knowing exactly what happened to him. Some rumors say he was fed to his hogs or his sausage grinder. No one ever saw him again after that day, along with his wonderful sausage meat. 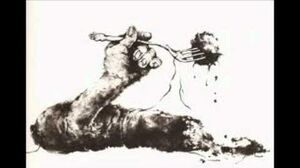 SCARY STORY WONDERFUL SASAUGE
Add a photo to this gallery
Retrieved from "https://villains.fandom.com/wiki/Samuel_Blunt?oldid=4148411"
Community content is available under CC-BY-SA unless otherwise noted.