Exploit the Military-Industrial Complex by undermining world peace to make a profit.

Samuel Capital is a private investment firm founded by Samuel Klein and a major antagonist organization in the anime movie 009 Re:Cyborg.

Samuel Capital seeks to undermine world peace by using the "His Voice" bombings to cause another war. They are also believed to be in league with the US Government and the NSA, who have provided them with the bodies of the U.S. soldiers who died in the Iraq War so they can use them for their "Post-Humanity Project", which involves the production of a series of metallic-armored cyborgs code-named "Lazarus".

Samuel Capital is also the parent company of the SMO, the shipping company used to clean up the wreckage from the "His Voice" attacks. Other affiliates of Samuel Capital include the Hazera Security Provider and American National Security Agency.

It is eventually revealed that Samuel Capital's executive board members are all followers of His Voice, and they are actually working to assist the force in restarting the world. 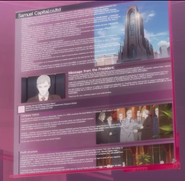 A chart of Samuel Capital's web of affiliates

Samuel Capital are revealed to be followers of His Voice.
Add a photo to this gallery
Retrieved from "https://villains.fandom.com/wiki/Samuel_Capital?oldid=3438101"
Community content is available under CC-BY-SA unless otherwise noted.