Watch over Humanity on orders of The Father while disguised as Dr. Samuel Hayden.
Take control of the UAC to prevent a worse outcome when the humans discovered Argent Energy.
Release Doomguy and convince him to kill Olivia Pierce.
Obtain the Crucible (all succeeded).
Prevent further interference from Doomguy (formerly).
Stop the Monsters invasion of Earth.
Help the Doom Slayer defeat Khan Maykr and the rest of the demons (both succeeded).
Use the power of the Father to seal away the demons for good.
Prevent Doom Slayer from granting the Dark Lord a physical form (both failed).

Samur Maykr, also known as Dr. Samuel Hayden or the Seraphim, is the anti-villainous central antagonist of the Doom reboot series.

He is the Chairman of the UAC who oversaw the Argent Energy research projects at the UAC Mars Base.

He is voiced by Darin De Paul, who also played the Seven Deadly Enemies of Man in Shazam!, Valkorian in Star Wars: The Old Republic, and Ardyn Izunia in Final Fantasy XV.

After coming to Earth for an unknown period of time, Samur Maykr constructed a cloned human body for himself and fabricated his new name and identity as Samuel Hayden to keep watching over humanity under the orders of The Father. According to the Codex, he was "born" to the wealthy and powerful Hayden family, so Samuel Hayden grew up to be a smart and prodigious philanthropist. Doing well in numerous fields of science, the UAC hired him after he became General Director of the Global Science Council. He is also the founder of the Samuel Hayden Foundation, which supports scientific talent for various schools. Following the discovery of Argent on Mars, Samuel lead the UAC to help mine this resource. However, as the energy tower to use this said source of energy was being built, Samuel Hayden was diagnosed with brain cancer, and to cheat death, he transferred the undamaged bits of his mind into a robotic form. However, the truth was he actually did this to sidestep the ancient rule of Maykrs being unable to enter Hell so he can retrieve the sarcophagus of the Doom Slayer.

Following this, Samuel Hayden gained the role of Project Director of the Argent Facility, guiding humanity to use the new resource for good use. Leading the first journey to Hell in 2145, he eventually discovered Doomguy/the Doom Slayer, who he had to keep under his guard away from his former friend and benefactor Olivia Pierce, who began to lose her mind after being corrupted by thoughts of Hell.

Following Olivia's betrayal and announcement of her plan to open the gates to demonic forces onto Earth, Samuel awakened Doomguy to try and convince him to assist in his plans. Although eventually gaining his help enough through information and force by cutting off communication, the more destructive marine destroyed much of Hayden's stations rather than disabling them, much to his own annoyance, as he planned to continue gaining this energy after the events of the game.

Meeting the man himself inside his own office, Samuel tells of his plans to find the fabled Crucible, the key to slow down the rate of Argent and end Olivia's mischief. He also directs Doomguy to head to Lazarus Labs for the Helix Stone and the BFG 9000.

Following Olivia's defeat, Samuel summons his minion, teleports Doomguy elsewhere, and takes the Crucible for himself to continue his plans to mine more energy.

Later on, Samuel reappeared on the world's stage to help fight against the demonic invasion of Earth. Offering to lead the charge against the demonic threat, the Allied Nations Council accepted his offer and had him become Lead Director of the Armored Response Coalition. Reshaping his facilities to supply Argent-made technology, Hayden was hailed by many for his battle against Hell's forces through making Argent-Synthesis, the Crucible, and command over human forces.

However, Samuel was badly injured during the failed Operation Hellbreaker, losing parts of his body in the process. Guarding the powered down cyborg, scientists at ARC also kept his Crucible. Upon his ally's arrival, staff at ARC gave Doomguy the Crucible as he also took Hayden's body, reviving it through the mainframe of the Fortress of Doom. Telling of Deag Grav's location, Doomguy shot a hole through Mars (much to Hayden's amazement), and went into Sentinel Prime to face Grav.

Following Grav's demise, the Khan Maykr attempted to take down the Fortress of Doom to end Samuel's life, only to be saved by Doomguy. He then safely guided his ally to defeat both Khan Maykr and the Icon of Sin to save Earth from hellish havoc.

After Doomguy saves the world by defeating Khan Maykr and the Icon of Sin, Samuel sends him on a mission to find the Seraphim, a figure from his past that will guide him into protecting the holy realm of Urdak from the demons that still remain after the gates of Hell were closed. Samuel and the UAC send Doomguy to the UAC Atlantica Facility, where the Seraphim was housed. Upon reaching his stasis chamber, Samuel transfers his consciousness into the Seraphim. Upon awakening, Samuel reveals his true identity to be the Seraphim.

Upon returning to the ARC Carrier, the Seraphim has been weakened by his rapid Transfiguration. He requests Doomguy to retrieve the life sphere of the Father from the Blood Swamps of Hell, for Maykrs are unable to enter the Dark Realm and says he will be waiting at the Sanctum. Upon accomplishing the Trials of Maligog, Maligog grabs Doomguy and carries him to the top of Ingmore's Sanctum where the life sphere was located. The Seraphim appears before him, ordering Doomguy to retrieve the sphere. However, Doomguy instead smashes the sphere, causing the Seraphim to collapse. Doomguy departs with a red life sphere, one for the Dark Lord, leaving the crippled Seraphim behind. This is so Doomguy can grant the Dark Lord a physical form and destroy him.

At the end of Doom Eternal: The Ancient Gods - Part 2, after Doomguy falls unconscious due to the death of the Dark Lord, three Maykrs resembling the Seraphim before his Transfiguration are seen placing his comatose body within a coffin. It is unknown if one of them was Samur or not. 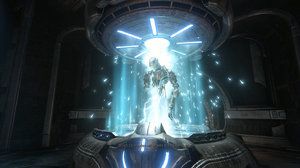 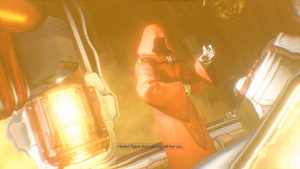 The Seraphim in Doomguy's flashback. 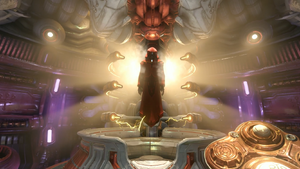 The Seraphim awakening from his slumber in the UAC Atlantica Facility. 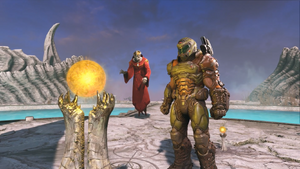 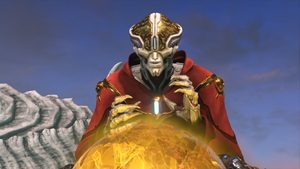 The Seraphim about to resonate with the Father's life sphere... 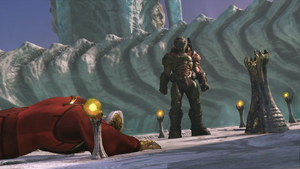 Only to be weakened when Doomguy crushes it. 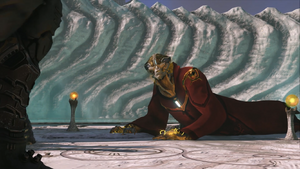 The Seraphim watching Doomguy walk away with the Dark Lord's life sphere instead. 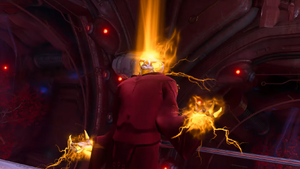 The Seraphim undergoing his Transfiguration to stop Doomguy. 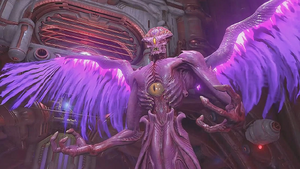 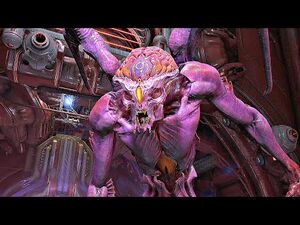