Get away with the murder of Adam Bentley (both failed)

Tragic Official
Samuel King (1938–2013) is the former head of the Grimsborough Police Department. He is the husband of the late Donna King, the grandfather of Cathy King, the father-in-law of Alex Turner, and the great-grandfather of Sammy Turner.

Samuel was an elderly man who had gray hair parted to the right side. He had light blue eyes and a thick mustache above his lips. As an officer of the law, King wore a white shirt with a black tie underneath a navy colored police chief suit. The suit showed four stars on each shoulder and consisted of GBPD's logo on the sleeves. In his youth, Samuel had blonde hair.

As a young man, Samuel King was well-acquainted with Stuart Huckabee and Serena Johnson; they would do everything together, such as taking violin lessons. At some point, Samuel met a woman named Donna, the designer of the Nautical Museum, a Pilgrim ship-like replica focusing on spreading awareness of the Pilgrim beginnings, and married her, and eventually the couple had an unnamed son. At some point, the unnamed son would marry an unnamed woman and have a daughter named Cathy. It becomes clear that Samuel and Donna's son and daughter-in-law are dead prior to the events of Criminal Case which is why Samuel and Donna look after Cathy rather than them. At some point, unknown to his family, as a young man, Samuel was pressured by Serena and Stuart to join the Crimson Order, a cult operating in Grimsborough that ruled the city from the shadows. When the Crimson Order set fire to a building, Samuel, who was an inspector at the time, knew that the fire marshals would be late, so Samuel rushed in and saved a young child trapped in the burning building. Because of this, Serena's son, Howard, the mayor of Grimsborough, awarded Samuel with a Medal of Valor. Samuel then wanted to leave the Crimson Order after realizing that they were willing to put children in danger. The Order was enraged at King's decision to leave them, so a member named Shane Kolinsky murdered King's wife Donna. King was then forced to work for the Order.

Working With The Player

King became a superior officer that Sergeant David Jones and the player had to report to from time to time. King would always pressure them to get results and commend the team for excellent work as well as provide legal support when need be. Because the Order threatened to kill his granddaughter Cathy, King did his best to cover up the Order's involvement in crimes by destroying evidence and burying police reports without the player's knowledge. When the Aloki tribe filed a complaint regarding the arson that destroyed their land, King ordered his department to ignore them and did his best to prevent the Aloki from getting more land when they were legally entitled to. At some point, a socialite supporting Mayor Johnson's campaign, Adam Bentley, was murdered by King. Before the murder, King was hostile towards him believing he was going to do something bad to Johnson. Adam discovered the Order was using a gold mine to finance their operations and blackmailed them for a portion; because of this, the Order pressured King to eliminate Bentley. King used a gun that belonged to mobster Tony Marconi to kill Bentley in cold blood. Marconi was once driving under the influence of drugs which is why King had the mobster's gun confiscated. When the player informed King that he was a suspect, King was pleased with the player's integrity and decided to step down from his rank until the investigation ended, and gave Jones as well as the player authority to treat him as an ordinary suspect. Jones and the player questioned Samuel about the firearm and King revealed that he filed the gun based on procedures he needed to follow; whatever happened to the gun was out of his reach afterwards. Jones also wanted to know as to why Samuel held a grudge against Adam Bentley and Samuel feared that Adam was getting very close to the Mayor and feared that something bad might happen to the Mayor. Samuel critiqued Jones's way of interrogating suspects when Jones inquired about Serena Johnson and his apparent bias of the Johnsons, but Jones needed to explore every lead. Thus ended Samuel's interrogation. The player then realized what really happened to Bentley and took Jones to King's office. Jones refused to believe this, but Samuel admitted everything to Jones but denied killing Bentley due to believing that Bentley was a danger to the Mayor. When Jones and the player wanted answers, King shot himself in the head, but not before telling the player that it was an honor working with them.

In the aftermath of King's death, the team was left to grieve for their leader while Cathy was obsessed with figuring out why her grandfather committed suicide. Upon learning that King saved a child from a burning building at some point, the team decided to investigate further into why Bentley was murdered and found out he was blackmailing the Order which got him gunned down. The team would also learn of King's past and eventually bring down the Crimson Order. King was succeeded as the new leader of  Grimborough's law enforcement by a woman named Diane Parker. Cathy would eventually settle down and marry her coworker Alex Turner, eventually giving birth to a boy named Sammy, named in honor of his great-grandfather.

King was an honorable man who was concerned about protecting the citizens of Grimsborough as head of its law enforcement branch. However, King loved his family and would do anything to protect them, even if it meant putting down others. King was originally part of the Crimson Order, but after they allowed a child to die in a building that they set on fire, King became disgusted with them and decided to cut ties with them. The Order needed King as an asset which is why they assassinated King's wife Donna in order to buy his respect. Without the player's knowledge, King did his best to avoid having the Department investigate the Order by covering up evidence of their existence. When the Crimson Order burned the land belonging to the Aloki tribe, King had the Department ignore the Aloki's pleas for help and destroyed court documents proving that the Aloki were legally entitled to more land in order to protect Cathy from the Order.

When the player discovered what happened to Bentley, King confirmed everything rather than deny it. Expressing guilt for killing Bentley and for harming the Alokis, King committed suicide knowing that the player would try to make him tell the team about the Order and it would place his granddaughter's life in danger. King truly did admire the player for their integrity and thought of the player as his own child. Despite all those faults, King was still held in high regard by the team and the Order, to King's delight, would be brought down while Cathy, also to King's delight, would live her life. 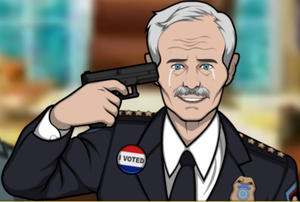 Samuel King about to commit suicide.
Add a photo to this gallery

Retrieved from "https://villains.fandom.com/wiki/Samuel_King?oldid=4269145"
Community content is available under CC-BY-SA unless otherwise noted.