Kill Tommy (succeeded) and anyone else who is able to expose his crimes.

Have Andy imprisoned to prevent him from clearing his name and to prevent word of his crimes escaping from prison (all failed).

He was portrayed by Bob Gunton, who also portrayed Leland Owlsley in the first season of the Netflix series Daredevil.

Samuel Norton starts out as a deeply religious man when Andy Dufresne arrives in 1947. As the year's pass, he notices a lot of potential in Andy and gives him protection from the guards, library access, and helping inmates get their GED's in return for aiding him in laundering money from kickbacks and his scams. At one point, Norton has his second-in-command and top prison guard Captain Byron Hadley beat up convicted rapist Bogs Diamond after it transpired that Bogs and his gang called The Sisters had been terrorizing Andy to the point where they constantly raped and beat up Andy on multiple occasions.

In 1965, a young thief named Tommy Williams comes along. Tommy reveals to both Red and Andy who truly killed his wife and that Andy was set up, proving his innocence. Andy tells this to the warden, but he refuses. Indeed, Norton needs him to take care of his shady business; but above all, he fears that his frauds will come to light if Andy is released. Dufresne, taken aback, asking him why he is so "obtuse" and trying to reassure him about his silence, only enrages and frightens Norton. He sentences Andy to the hole for one month. Then Norton questions Tommy Williams. Comforted by his testimony and his desire to help Dufresne unveil the truth, Norton has Tommy eliminated by Captain Hadley, disguising the murder as an escape attempt. The next day, he visits Andy in his isolation cell, lying about the murder by telling instead Tommy has attempted to escape. Andy, suspecting the murder, tells Norton he is done with all this. Norton, determined to keep Andy under his thumb, threatens to take away everything from Andy if he quits by torching the library, removing him from being protected from the guards and moved from his cell into appalling conditions and gives him another month to think about it.

However, Andy then succeeds in escaping through a tunnel he had been digging for the past 20 years (27 years in the book). An angry Norton fortuitously discovers that the poster on the wall actually masks the entrance to a tunnel, which Dufresne painstakingly dug during his nineteen years of imprisonment, using the stone slicer Red had given him. Under the name "Randall Stevens", the identity he used to store all of Warden Norton's money, Andy not only drains him of all of his ill-gotten gains - but also delivers a book that exposes Norton's corruption and Hadley's conspiracy when it includes disclosing their killing of Tommy to the Daily Bugle.

The police then come to Shawshank to arrest them both. They succeed in arresting Captain Hadley, but Norton wasn't going to go quietly. Loading up a gun he kept in his drawer, he prepares to take as many police officers down with him as possible as soon as they entered his office, but then he decides to turn the gun on himself and take his own life instead. While what Norton was exactly thinking when the bullet passed through his head is unknown, Red likes to believe that it was to ponder on how Andy Dufresne ever got the better of him.

In the book, however, Norton escapes arrest by resigning from his post. He isn't as cruel in the book, as he had Tommy transferred to another prison where he could be paroled soon to keep him quiet instead of having him murdered, and didn't force Andy to be in solitary confinement for two months. He is also not as present in the book, given he doesn't take over Shawshank as warden until later in the story. In fact, within the film, he is a combination of the different wardens in the novel that took over Shawshank before he did. 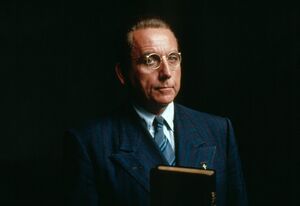 Norton when he first appears in the film. 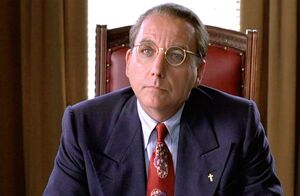 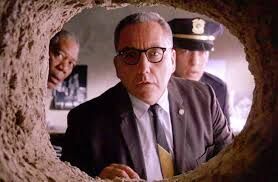 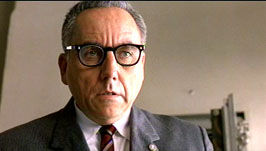 Norton left in shock after he's been discovered.

Norton about to shoot himself.
Add a photo to this gallery 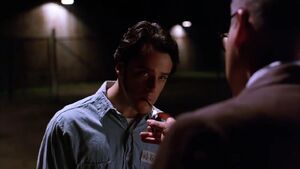 Retrieved from "https://villains.fandom.com/wiki/Samuel_Norton?oldid=4393380"
Community content is available under CC-BY-SA unless otherwise noted.