Samuel Lawrence Whiskers is the title character and the main antagonist from Beatrix Potter's The Tale of Samuel Whiskers (or the Roly-Poly Pudding). He is an obese, short male rat who is married to Anna Maria. He is first seen when naughty Tom Kitten is hiding from his mother, Mrs. Tabitha Twitchit, and when he ends up in a pile of dirty rags, much to his own fear. Samuel calls over his wife who then ties Tom up, and he then requests a kitten dumpling roly-poly pudding for his dinner. He tries insisting on having it with breadcrumbs, but she denies it, telling him it calls for butter, dough and a rolling pin. Samuel reluctantly accepts the idea, and he goes into the dairy to steal a pat of butter and a rolling pin, unaware that one of Tom's sisters, Mittens, hiding in a big pot, is watching.

As Samuel get back, he butters Tom, eating a bit of the butter while Anna Maria rolls out the dough. They both put him on the dough and roll the dough.

Later, while they are rolling out the dough, Samuel sees that Tom's tail is sticking out and criticizes the amount of dough Anna Maria fetched. She sharply tells him she fetched as much as she could carry. He then decides Tom wouldn't make a good pudding as he smells sooty. They are then forced to move out as John Joiner saws the floor, and they leave Tom behind. Samuel then forces his wife to push the wheelbarrow (which happens to be the author's). He runs after her and says there might have been room for the pudding. They finally enter Farmer Potatoes' barn, and Samuel ties the bundles onto the rope, starting with a bag with Samuel's initials. 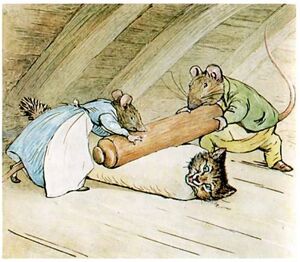 As seen in the Nickelodeon Peter Rabbit series.
Community content is available under CC-BY-SA unless otherwise noted.