The Samurai Armor
The Armor

Kill anyone that comes across it.

The Samurai is a minor antagonist in the The Conjuring franchise, first appearing as a supporting antagonist in the 2019 film Annabelle Comes Home. It is a suit of ancient Japanese samurai armor that is possessed by the evil spirit of its former wearer.

The Samurai was an unnamed warrior in feudal Japan. While little is specifically known about the Samurai's past, it is known that it attacked and slaughtered innocent people, including women and children, without remorse. When the wearer died, that person's soul possessed their very suit of armor. Sometime after the Warrrens founded the New England Society for Psychic Research in 1952, they came into possession of the armor, blessed it, and sealed it away in their occult museum in their home.

The samurai armor is seen as a prominent item in the museum.

Many years later, the Warren's daughter Judy is at home being babysat by a girl named Mary Ellen and her friend, Daniela Rios. Daniela Rios had just suffered the loss of her father, and waited until the other girls were absent to sneak into the occult museum and try to find a tool to contact her late father. While inside, she touches several haunted and cursed items, including the coins taken from the corpses. She unlocks and opens the case of Annabelle the Doll, but forgets to lock it back up when she leaves. With the demon now set loose, it draws energy and brings the Samurai and other spirits to its aid.

After being plagued by evil and violent spirits all night, Judy and Mary Ellen realize they need to lock the doll back in its case to defeat the spirits. As they head to an office room to look for the doll, the hallway is blocked by the armor. The two girls begin to walk past it, but the sounds of screaming and yelling of the Samurai's past victims, as well as the Samurai's battle cries, manifest and grow in volume. As Mary Ellen attempts to get by, the helmet turns and follows her. Mary Ellen looks into the hollow mask of the armor and is seemingly entranced or frozen as the screams and shouts grow louder. Judy manages to snap her out of her daze long enough to get past, but Mary Ellen looks back to the armor to find the helmet spun all the way around, still staring at her. She is briefly frozen again before Judy pulls her away.

Judy and Mary Ellen, after getting past The Ferryman and the Bride, manage to obtain the Annabelle doll and rush it back to the room. Judy tries to lock it back in the case, but is attacked by the demon possessing the doll, who begins stealing her soul. Mary Ellen rushes in to help, but is thrown by the demon into the waiting samurai armor, which falls to the ground with her and ends up face-to-face with her. When Mary Ellen opens her eyes, she is horrified to see a bloody face with wide open eyes staring back at her from behind the helmet. She manages to escape the Samurai, and along with Daniela, manages to help Judy lock the doll back in the case and cut off power to the other spirits.

The armor is once again seen in the museum in The Conjuring 2 among the Warrens' other haunted artifacts. 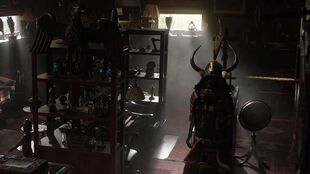 The possessed armor in the Warren's occult museum. 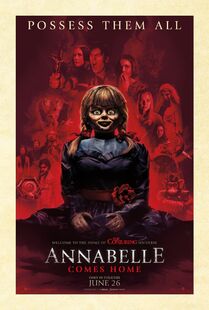 The Samurai on the poster for Annabelle Comes Home.