Get back together with Hopson (succeeded).

The nameless Samurai Leader is a minor antagonist in Paradise P.D., only appearing in the episode "Ice Ice Babies". He is the samurai leader of a ninja army and honorable Japanese emperor, who has a sexual past with Stanley Hopson.

In "Ice Ice Babies", Stanley Hopson was kidnapped by an army of ninjas, who took him away to a Japanese house in the city of Paradise, with Randall Crawford having to save him. When he got through the army and made it to the main room, the samurai leader had Hopson tied up in a chair. The Samurai Leader leapt out of the shadows and held Randall and Hopson both at swordpoint, telling them that he was about to kill them.

Just then, he broke down crying, saying that he couldn't even bring himself to kill them because of some pain from his past. Randall said that he really wasn't interested in hearing his tragic backstory but the samurai leader went on to explain that one day, when he was doing his job as the honorable emperor he is, he fell in love with a "geisha" (really Hopson in drag) and was shocked when he revealed he was a man. Despite this, he and Hopson had sex often, which the samurai leader enjoyed immensely. However, one day, Hopson left him and broke his heart.

Today, the samurai leader has decided to take revenge on Hopson by killing him. Hopson told him that the only reason he left him was due to his "egg roll" not quite "filling him up". This comment really ticked the samurai leader off, as egg rolls were Chinese and he was Japanese and he didn't appreciate the confusion. The samurai leader transformed into a giant dragon and breathed a geyser of fire at them, ready to kill them. Hopson revealed that he had magic powers as well and transformed into a tiny little bonsai tree, which was completely ineffective, forcing Randall to fight off the dragon by himself and got into an action-packed battle with him.

When all seemed lost for Randall, the battle was cut short when Dusty Marlow came crashing through the roof on his desk, smashing the dragon and knocking it down. Randall thanked Dusty for saving his life, but the now unconscious Dusty fell out of his desk and Randall punished him for leaving his post by assigning him with three more months of desk duty. Randall took Hopson home and the next day, Hopson had the samurai come over and renew their friendship. 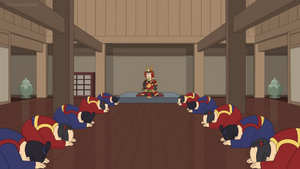 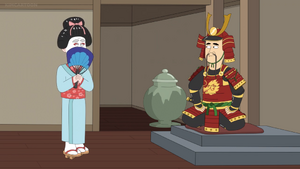 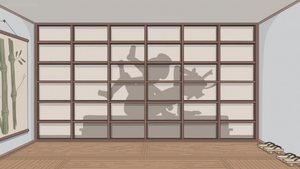 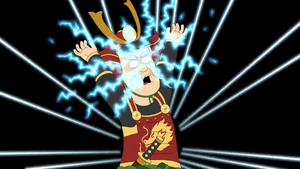 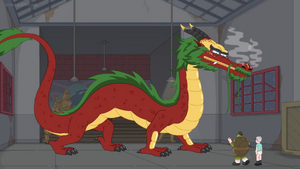 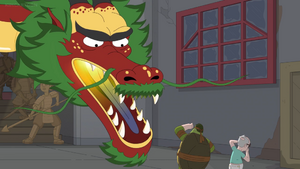 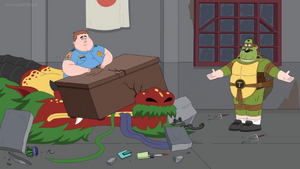