Chairman of the InterGalactic Banking Clan

Producing weapons, droids, and ships for the Separatists.
Leading the Banking Clan.
Profiting off of the war.

Maintain the power and influence of the banking clan and of the galaxy's markets.

Support the Separatist war effort and supply the Confederacy military with ships and droids.
Overthrow the Galactic Republic and replace it with a more noble government.
Support and continue the war and make a profit of it.

San Hill is a male Muun from the planet of Munnilist who served as the Chairman of the InterGalactic Banking Clan during the Clone Wars. He pledged the monetary aid and support for the Confederacy of Independent Systems and became a powerful and influential figure in the Confederacy as he was responsible for the creation of its military leader, General Grievous, who became the Supreme Commander of the Droid Armies.

San Hill first appeared in Star Wars: Episode II Attack of the Clones as a supporting antagonist where he was one of the many corporate leaders who supported and joined the Confederacy during thr Separatist Crisis. He would go one to become one of the Confederacy's leaders and served as a member of the Separatist Council during the war. He appeared again in Star Wars: Episode III Revenge of the Sith as a minor antagonist and appeared in the 2003 animated miniseries as its first antagonist.

San Hill is a tall, thin Muun from the InterGalactic Banking world of Muunilinst. He was the son of Lars Hill, a senior employee of Damask Holdings. When he was young, San's father traveled to Coruscant for his induction into the Order of the Canted Circle but was killed during his time there. San Hill was then taken in by Hego Damask (secretly the Dark Lord of the Sith Darth Plagueis) and was groomed in preperation for when he'd take over the banking clan and become its new chairman which he did become in 32 BBY.

In 24 BBY the Galactic Republic and the Galactic Senate were abuzz after a new wave of separatism had swept across the galaxy. Thousands of star systems and planets saught to secede from the Republic and began joining the newly formed Confederacy of Independent Systems. San Hill took advantage of the crisis as he had the Banking Clan make a profit off of the numerous worlds who wanted to secede and make their own currencies as well. When the secessionist movement struck the senate, San Hill began searching for a "collective agent" who would stabalize the Banking Clan and still have debts be paid off despite the crisis.

During his search for the agent, San Hill came across one on Kalee, a warlord by the name of Qymaen jai Sheele, and saught to recruit him into the organization. He convinced the warlord to join by promising to help pay off and relieve Kalee of its debts that it had gathered as a result of a crushing Republic embargo on the planet that was imposed sometime during the Huk War. Grievous joined the organization and became the head of its Collections and Security Division where he would go around and collect debts that people, organizations, and other entities had owned to the InterGalactic Banking Clan. Grievous however, would abandon the IGBC after the Huk had ravaged sacred Kalee grounds which enraged the Muun chairman.

He would seak options to get revenge on the Kaleesh warlord and he thought up of assassination but, he changed plans after being approached by Geonosian Archduke Poggle the Lesser and Political Idealist/Sith Lord Count Dooku where they had an alternative solution to convince the warlord to stay with them. They planted an ion bomb on his ship, the Martyr, and detonated it and afterwards, they picked up the surviving warlord with fatal injuries. He was then brought back to a facility where San Hill had explained how it was a Republic bomb that damaged him and the warlod both fell for it and agreed to become a cyborg. He was then reborn as the infamous General Grievous who would become the Supreme Commander of the Droid Armies and the military leader and most powerful general of the Confederacy.

Following his work with Dooku, he was open to the talks of joining Dooku and his new Separatist movement. Having been an acquantince with Techno Union Foreman Wat Tambor and Commerce Guild President Shu Mai, he was in good company when being offered to join the alliance. After recieving an invintation by Dooku, San Hill traveled to the Outer Rim world of Geonosis where he met with Dooku and the other future Separatist leaders who discussed signing a treaty by Dooku which would announce their secession from the Republic and would become the leaders of the newly formed Confederacy of Independent Systems.

San Hill agreed and declared that the IGBC would sign the treaty and support the Separatist Droid Army with Hailfire-Tank Droids and Hill's pledged support to the Confederacy made the Banking Clan the second largest financial backer of the CIS ahead of the Trade Federation lead by Viceroy Nute Gunray. San Hill would remain on Geonosis when the Grand Army of the Republic had invaded the planet and began the Clone Wars. During the ensuing battle, the chairman attempted to flee the planet by escaping in a Hardcell-Class Interstellar Transport which he had recieved from Wat Tambor. During the escape however, the ship's engines were damaged and he was left stranded for weaks but avoided Republic capture and was eventually rescued by Riklon Tost of the Iotran Guard and returned to Confederate space to lead the Separaitst war effort.

Following the outbreak of the Clone Wars, San Hill became one of the Separatist leaders and was put on the Confederacy's governing body, the Separatist Council, while the Separatist Parliament on the Confederate capitol of Raxus debated endlessly to no avail. Despite pledging his support however, Hill was unable to fully support the Confederacy financaiy as he feared the IGBC would lose its markets and investments back in the Republic. To fix this situation, Hill remained away from Coruscant while other Banking Clan representatives stayed in the senate and he traveled to Aargau to raise money for the Confederacy and the war effort.

In order to secure the Ando System's support for the Separatists, San Hill and Wat Tambor had put Po Nudo, a former Republic Senator and Council member, in charge of the Hyper-Communications Guild, the Separatist version of the Republic HoloNet that would use secret Banking Clan codes to spread Confederate propraganda. The communication system was set up and linked the holotranscievers used by the Separatis leaders and kep their messages out of Republic hands.

During the early stages of the war, San Hill returned to his homeworld of Muunilist which had just allied itself with the Confederacy and commanded the Separatist forces from a war room in a large tower. During the battle, Hill was accompanied by the infamous bounty hunter Durge and was protected by legions of IG Lancer Droids and the entire droid army present on the planet. Hill remained in the war room accompanied by other Muuns and a Neimodian aide but, their headquarters was broken into by a Republic strike team and he and his associates were taken into custody. San Hill however, eventually escaped Republic custody and returned to the Confederacy under the protection of General Grievous.

After escaping Republic custody, San Hill and the other Separatist leaders were placed under the protection of General Grievous and traveled all across the galaxy serving as councilors and commanders for the Separatist forces during the war. Towards the end of the conflict, Grievous lead a Separatist invasion and subjugation of the sinkhole world of Utapau where it became the headquarters for the Separatist Council. Hill remained on Utapau with the other Separatist leaders as they oversaw the Separatist attack on Coruscant and briefly celebrated as it seemed that a victory was afoot but, the chancellor was rescued and the Confederate Head of State, Count Dooku, was killed over the planet on the Invisible Hand and the Separatist forces were forced to retreat.

Following the Separatist retreat on Coruscant, San Hill and the other Separatist leaders remained on Utapau as the Confederate fleet returned back to Separatist space and Grievous made his way back to Utapau. General Grievous had gathered the Separatist Council to a meeting where he knew that it wouldn't be long before the Republic found them on Utapau and he had them sent to Mustafar in the Outer Rim to remain safe. The Separatist leaders fled and shortly after their departure, the Republic had invaded Utapau and Grievous was killed by Jedi General Obi-Wan Kenobi, his longtime rival and archenemy. Upon his entry into Mustafar, the Separatist Council had gathered in the war room in the Klegger Corp Mining Facility and oversaw the last remaining moments of the war.

After Grievous was killed, the Separatist Council had assumed full control over the Confederacy and the council leader, Nute Gunray, became the new head of state. San Hill joined the Separatist leaders for a meeting where they were addressed by the Confederacy's de-facto leader Darth Sidious where the dark lord had promised to reward them for theitr loyalty and services to him and would send his new apprentice, Darth Vader, to "take care" of them. San Hill and the other council members waited and after Order 66 was initiated and the Jedi Order was destroyed, Vader arrived at the facility and San Hill greeted him with gladness moments before the massacre. During the massacre, San Hill had discovered that Vader was Anakin Skywalker, the famous Republic war hero, and pleaded for mercy but, it was useless as the Sith apprentice cut down the Muun leader.

After the Mission to Mustafar, the shut down command was broadcasted and all units of the Separatist Droid Army were deactivated and the Confederacy was dissolved thus, ending the Clone Wars. The Galactic Republic had fallen and was also dissolved and reformed into the Galactic Empire where all Confederate weapons, assets, resources, and worlds were annexed into the new empire including the Banking Clan. Due to San Hill's support and leadership of the Confederacy throughout the war, he helped lead to the downfall of the Republic and the eventual return and rise of the Sith to the galaxy as its new rulers. 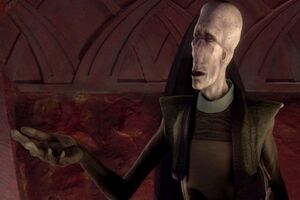 Retrieved from "https://villains.fandom.com/wiki/San_Hill?oldid=3481753"
Community content is available under CC-BY-SA unless otherwise noted.