Vicar of Sparda within the Order of the Sword

Retelling both the history of the Order of the Sword and the legend of Sparda.

Use his creations to submit humanity.
Acquire the powers of Sparda.
Complete the Savior.
Kill Dante and Nero (all failed).

Sanctus (in Japanese: サンクトゥス, Sankutusu), more commonly known by his followers as His Holiness (in Japanese: 教皇, Kyōkō), is the main antagonist of Devil May Cry 4.

He was portrayed by Liam O'Brien in motion capture.

At some point in his life, Sanctus became determined to rule the human world alongside his beloved religious organization, the Order of the Sword, and cleansed it of all there is unholy, using demonic power. He sought to create a holy demonic construction called the Savior, which would allow him to dominate the world. However, Sanctus needed one with the blood of Sparda to power it and sent out the members of the Order to find Devil Arms that were needed to power the Hell Gates so as to draw Dante to the Order's home island Fortuna. Eventually, they found Yamato, which could be used to power the true Hell Gate within the city.

This made Dante show up, crashing through the ceiling of an opera house, just as Sanctus was delivering a sermon and shot him in the face before the eyes of the frightened citizens. However, the Order of the Sword revived their beloved leader using the Ascension Ceremony, a magical ritual of theirs used to give members of the Order demonic powers and angelic appearance, though this did not transform Sanctus at first. After Agnus discovered that Nero also possessed the same demonic blood and power of the Order of the Sword's holy "god" Sparda as did the Son of Sparda (Dante), Sanctus changed his plans, deciding to use Nero to power the Savior instead. He did this by having Nero's love interest, Kyrie, kidnapped so as to lure him to the demonic creation. When he arrived, Sanctus could neverc onvince him to be absorbed into the Savior willingly and overpowered him, absorbing him into the Savior anyway, also taking back Yamato. As he was activating his new creation, Sanctus found himself being attacked by his former warrior, Credo, who was angered that his sister (Kyrie) had been exploited in such a manner. However, Sanctus simply impaled him on Yamato and let him fall, though he was caught by Dante. Trish also appeared, who had infiltrated the Order of the Sword as Gloria, though this came at no surprise to Sanctus who also has been given the sword of Sparda from her, who stated that he had known who she really was. He then stated that awakening of the Savior could not be stopped and this indeed seemed to be true. They failed to stop the demonic creation from awakening and it flew away with Sanctus.

Agnus then proceeded to open the Hell Gate beneath Fortuna using the Yamato blade, releasing hundreds of demons and causing havoc upon the City of Fortuna. The Holy Knights of the Order of the Sword then appeared, even as "angels" to "save" the people and soon the Savior appeared, eradicating all the demons. Sanctus cried out that the people should not fear his creation, it was their messiah and that "he" would soon deliver them salvation. However, Dante managed to destroy the other three Hell Gates and take Yamato from Agnus. He then destroyed the true Hell Gate and confronted Sanctus as an Alto Angelo. Dante destroyed this empty puppet and attacked the Savior in an attempt to get at Sanctus, who was inside. Though unable to get inside himself, Dante managed to send Yamato into the creature, allowing Nero to escape his confinement.

After fighting his way to the Sacred Heart of the statue, he was confronted by Sanctus in his true demon form, Sanctus-Diabolica. However, Nero defeated him and the former holy man, even in his matyrdom, demanded to know why the spirit of Sparda would never give him the power to finish off his enemy. Nero told him that even though the Legendary Dark Knight was a demon, he was the kind of demon that still had a heart and the capability to love another person, something that Sanctus lacked. Nero proceeded to slay him and escape the Savior, though the battle was not over yet.

The Savior bonded with what remained of Sanctus to become the False Savior in one last attempt to finish off Nero. However, this form was much weaker and Nero managed to finish it by crushing its face in the Devil Bringer.

The most notable aspect of Sanctus's personality is his desire for power, going to great lengths to attain it. He is highly manipulative, ruthless and cruel, not caring what methods he has to use to achieve his goals (showing a more Machiavellian approach to gaining his results). Sanctus does not care about anyone but himself and thinks of himself quite highly, though he is quite cowardly, since he lets others to do his dirty work and not afraid to use Kyrie or others as human shields. He could be considered desperate for victory, as well as somewhat sadistic, since he finds amusement in the idea of Credo and Nero fighting for love. Sanctus only values his subordinates when they are of use in furthering him and his goals. He is a man who is obsessed with transcending humanity and ruling the human world as an immortal God by obtaining the power of Sparda; which he believes is the greatest in all creation. 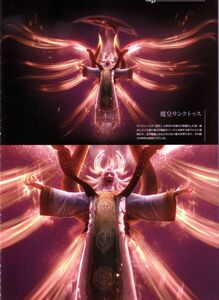 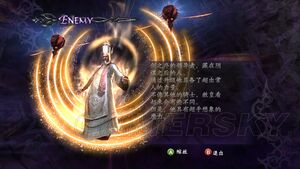 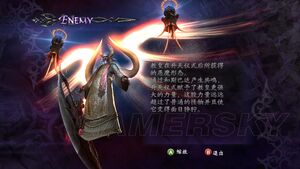 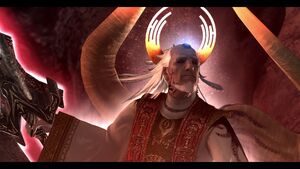 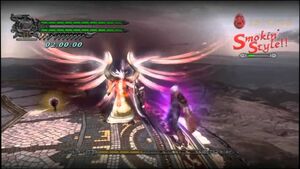 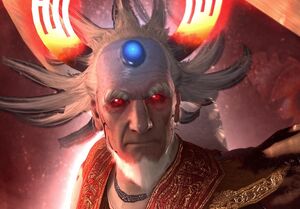