Turn his body into sand

Eddie Slick, nicknamed the "Sand Demon", is an antagonist in the second season of The Flash. He is a meta-human from Earth-2 with the powers to turn into sand. He was sent to Earth-1 by Zoom to kill Barry Allen.

He is portrayed by Kett Turton who portrayed Jeff Palmer in Smallville.

On Earth-2, Slick had previously had altercations with The Flash who called him Sand Demon due to this powers, using cluster bombs to drive him away. Slick was eventually forcibly taken by Zoom, who brought him to Earth-1. Zoom ordered him to kill The Flash in return for sending him home.

In order to do so, he sets fire to a building at the Central City Waterfront to lure Barry in. After Barry arrives and extinguishes the fire, he reveals himself and attacks. When Barry strikes back and hits Sand Demon, he turns into sand and thereby evades the blow. When Barry, surprised at what happened, turns around he sees no sand anywhere and Sand Demon is gone.

Back at Star Labs, Barry is informed by "Jay Garrick" that Sand Demon originally hails from Earth-2. Though "Jay" offers Barry to help him, Barry refuses because he doesn't trust "Jay". Eventually, Joe West finds out that Sand Demon is actually Eddie Slick. Though Slick escapes from Joe, he is knocked out moments later by Officer Patty Spivot. However, while interrogating Slick at the CCPD Joe quickly realizes that they caught Slicks Earth-1 counterpart who, despite being a former arsonist, is innocent. They are forced to release him and tell him not to return. However, the real Sand Demon walks towards Joe seconds later. Oblivious to this, Joe reminds Slick that he told him not to return but Sand Demon uses his powers to knock out Joe. Spivot opens fire at Sand Demon, who is unharmed due to his powers. He then kidnaps her to get to Barry. By use of his newfound powers, Cisco manages to find out where Sand Demon is keeping Spivot. He also finds that Sand Demon intends to use a concussive bomb against Flash to distract him. To distract Sand Demon, "Jay" dons his old suit to distract Sand Demon. Though Slick realizes that "Jay" cannot use his powers, he is indeed distracted and Barry manages to save Spivot before the bomb goes off.

Determined to kill both Flashes, Sand Demon then turns his arm into sand and chokes "Jay". To save "Jay", Barry uses his speed to create lightning which he throws at Slick. The power turns Slicks' sand body into glass. Shattering upon impact, Sand Demon dies. 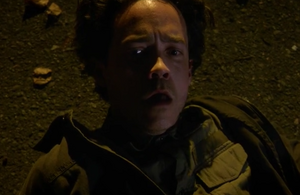 Slick is brought to Earth-1. 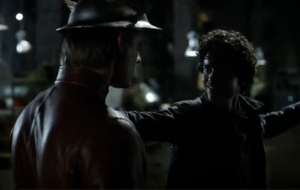 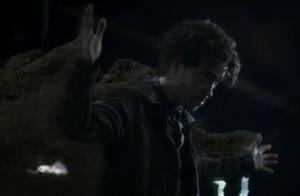 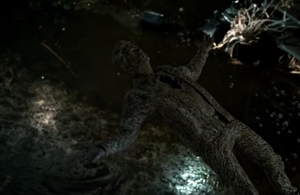