Take leadership of the Jakanja.

Stop Tau Zant and take his power for himself.

Seventh Spear, Sandaaru is the shark-themed leader of the Seven Darkness Spears of the Jakanja, the second-in-command to Tau Zant and the secondary antagonist in the latter half of Ninpuu Sentai Hurricaneger.

While the Jakanja waged their campaign across Earth to prepare for "It", Sandaaru roamed the cosmos searching for one of the two components needed to invoke "It"'s power, the Raging Arrow. After finding the Raging Arrow medal on Planet Astrum, Sandaaru came to Earth to assist Tau Zant in obtaining the Grieving Bow. He arrived on Parasite Fortress Centipede not long after the demise of Manmaruba and immediately took command of the Seven Dark Spears, leading Sargain to view him as a rival. Enlisting one of Satarakura's Masked Ninjas, Sandaaru was able to trick the Hurricanegers into helping him break the seal on the Raging Arrow medal.

To prove himself to Tau Zant, Sargain used his Karakuri Giant, the GainGain, to wield the Raging Arrow in order to unlock its power. Sargain fought the Hurricanegers, Gouraigers and Shurikenger in their mecha, but was defeated when they formed Revolver Tenrai Senpuujin. While Sargain survived and attempted to continue the fight on foot, Sandaaru appeared before him. He revealed to Sargain that he had backed up his Karakuri system and informed him that he was no longer of any purpose to the Jakanja, before swiftly dispatching him on Tau Zant's orders.

While Tau Zant was disappointed with the continued failures of his minions, Sandaaru requested he be allowed to make another attempt. For his scheme, h e summoned the Cursed Fan-Beast Madogi and had her create evil clones of the Hurricanegers, Gouraigers and Shurikenger. The real Sentai warriors soon showed up to battle their clones and defeated them, but this was all part of Sandaaru's plan, as the collars the clones were wearing attached themselves to the Hurricanegers and brought them under Madogi's control. Madogi then made the Ninja Sentai attack Kagura, causing her to feel sorrow at having to fight people she had grown to care about. After Kagura sliched Madogi and freed the Hurricanegers from her influence, Sandaaru ambushed her and extracted the Grieving Bow medal from her, causing her to die as she no longer had it to keep her alive.

Sandaaru then brought the Grieving Bow to Tau Zant, who announced that for the next stage of his plan he would have to assume a suitable form to wield them. After witnessing Tau Zant use Satarakura as a pawn to gather energy, Sandaaru realized his boss viewed them all as expendable pawns and began plotting against him. When Satarakura attempted to use the energy for his own purposes, Tau Zant sent Sandaaru down to retrieve the energy and eliminate him. Sandaaru seized the backpack containing the energy before slicing off Satarakura's mask and leaving the raging Satarakura to be killed by Shurikenger. Once Sandaaru brought the bag to Centipede, Tau Zant absorbed the energy from it to assume his Ultimate Form and grow giant, destroying the Centipede in the process. The giant Tau Zant used the Grieving Bow to fire the Raging Arrow and open a wormhole to the Evil Will's universe to begin the process. However, it was at that point that Sandaaru betrayed Tau Zant and struck him between the eyes, seemingly killing him.

With Tau Zant gone, Sandaaru took control of the plan. He prepared to eliminate Furabiijo and Wendinu, the only other surviving Dark Spears, but when the two offered to be his helpers he allowed them to stay alive. Alongside Furabiijo and Wendinu, Sandaaru confronted the Hurricanegers and Gouraigers. After Furabiijo and Wendinu were defeated, Sandaaru grew giant and faced the two Ninja Sentai teams in their mecha. Sandaaru was able to successfully hold his against both of them, until the Gouraigers, as a way of atoning for having previously helped the Jakanja, decided to sacrifice Gouraijin to kill him. They had Gouraijin grab Sandaaru before stabbing through both him and their mecha with their sword. Fatally wounded, Sandaaru calmly stated that his destiny must be to die right then before perishing in Gouraijin's explosion.

Sandaaru was later revived by the Evil Will to take on the Hurricanegers and Gouraigers. Alongside Satarakura, he fought HurricaneRed but was beaten back by him. He was then finished off by a slash from HurricaneRed and destroyed alongside the other Seven Dark Spears.

Some time later, his son Sandaaru Jr. began working as a space ninja for the Space Empire Zangyack. Alongside Satarakura Jr., he went down to Earth to challenge the Gokaigers and avenge his father's death. 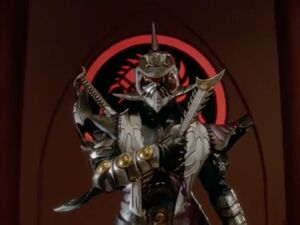 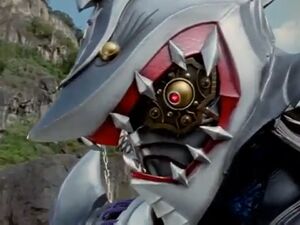