Sandy
President of the Fashion Club

To enforce and maintain her social supremacy.

Sandi Griffin, usually just called "Sandi", is the secondary antagonist from the animated show Daria. Sandi is the head the "Fashion Club", as they call themselves, a group of girls at Lawndale High who use fashion dos and don'ts as an excuse for social elitism. While all the girls in the club are portrayed as vastly shallow and function as a collective antagonist, Sandi is the central bad influence of the group and arch-nemesis to Daria's sister, Quinn, even though the two outwardly profess close friendship with each other.

She was voiced by Janie Mertz.

Sandi founded the Fashion club after a disaster at her previous school when she tried to organize the school dance committee. While her brothers were to blame for the disaster mainly Sandi's mother assured her that volunteering is synonymous with being a doormat. Sandi seems to have taken the experience to heart and when arriving at Lawdale High she founded the Fashion Club, a clique dedicated to being fashion savvy. Though the club officially was founded in the name of preventing peers from becoming tone-deaf to their own appearance with Sandi at the helm the club became a socially excluding elitist clique. Though often cruel and thoughtless to their schoolmates, including each other more than once, most of the members do so out of self-involvement rather than genuine malice. Unlike her fellow Fashion Club members Sandi's cruelty is almost always intentional.

Sandi is officially the president of the Fashion Club and has Quinn Morgendorfer as her vice-president, the two despite their pretense of admiration for each other in truth each consider the other a rival, Quinn because Sandi is offically higher rank and holds sway over their circle and Sandi because Quinn has more male admirers and fashion sense. Sandi tries to covertly sabotage Quinn whenever she gets the chance, change her outfit at the last second to conflict with Quinn's, spreading rumors about Quinn and even trying to physically harm her on a few occasions.

Sandi's mother, Linda frequently critiques those around her, most notably Daria and Quinn's mother Helen Morgendorfer. Like Sandi, Linda often snipes at and undermines Helen because she is more competent than she is at her job, though Linda is a Marketing-vice President and Helen is a lawyer Linda's position is higher in her company and higher paying; leading Linda and Helen's rivalry often mirroring Sandi and Quinn's. Sandi's father, Tom, is rarely seen on the show but his short appearance in the episode Fair Enough suggests that he is trepidatious and submissive to his wife and kids' demands. Sandi's brothers, Chris and Sam, are two preteens often caught-up in a traditional sibling-rivalry. Chris and Sam publicly roughhouse, shout at each other and call each other names. Neither Chris nor Sam has much respect for their big sister, however both are completely enamored with Quinn and compete with each other to get her attention and favor when she is around. It is unknown if any one member of Sandi's family has had a deciding influence over her behavior, but at the very least the frame-work of Sandi's psyche is easily comprehended by seeing her family life.

As Quinn is embarrassed of her older sister, throughout the series Quinn frequently refers to Daria as either her weird cousin or an exchange student living at her house. In the episode Lucky Strike Sandi finds out Daria is in fact Quinn's sister and tries to blackmail her with the information, but by this point Quinn has become more empathetic with her sister and more exasperated with Sandi and allows Sandi to do as she pleases. Sandi's announcement to her fellow members, Tiffany Blum-Deckler and Stacy Rowe, only prompts Tiffany and Stacy to reveal that they were aware of Quinn's relationship to Daria since they first met her and that they had not called attention to it for Quinn's sake. Sandi's attempts to call out Quinn for being directly related to the school "brain" only backfire as Tiffany and Stacy question how the issue was new to her; With no answer to give, Sandi is plainly exposed not only for being the most petty member of the  Fashion Club but also apparently the dimmest.

In the special Is It College Yet? Sandi loses her voice due to a viral infection and Fashion Club member, Stacy, believes her wish that "Sandi would shut up" caused it. Sandi, ever the opportunist tries to use Stacy's guilt to get her to do her a long list of things to make it up for her but Stacy is pushed to the breaking point and takes an indefinite sabbatical from the club. Over the course of the special all members of the club eventually go on indefinite sabbatical leaving Sandi alone until she is forced to go on one too, claiming 'she was thinking of doing so anyway' and effectively dissolving the Fashion Club. The girls continue to hangout despite their club officially no longer existing. However, this robs Sandi of nearly all her clout.

Sandi Griffin's less engaging behaviors often lead her to be pegged in fanfic as a four-star power-hungry bitch. Sympathetic portrayals of her are uncommon. Kara Wild's "Outvoted" and "Quinnicitis" are excellent examples. In Wouter's Dariarotica story "Party at Lindy's" when Quinn is imagining her friends in sexual situations, she depicts Sandi as the kind of person who would probably like rough sex, because of her bossy nature. In that same story Sandi is seen telling in detail about her, alleged, sexual encounters to a severely emberassed Quinn taking delight into making Quinn feel uncomfortable. Although in the lunchroom scene where Quinn gives her friends an unwilling carte-blanche into her erotic encounter, Sandi is seen with a look of pure disbelieve on her face. And in "Through a Webcam Lens Darkly", Sandi is all too happy to place a webcam in Quinn's room so that her brothers can peek in on her. When Sam asks why she went along with it because of she and Quinn are supposed to be friends, Sandi replied by saying that she had her own reasons and left it at that.

Fanfiction occasionally depicts a Sandi Griffin who seeks redemption for her various sins. A "Redeemed Sandi" has usually passed through horrifying experiences, not always as a result of her own actions, and is at or near the bottom of her life, emotionally and spiritually. One fanfic writer who has embraced this concept is Brother Grimace; many of his fanfics, most notably "It's All About Respect" and "The Devil in Miss Morgendorffer", make extensive use of this plot device. Sandis who have been transformed by suffering, either self-caused or accidentally, appear in Kara Wild's Driven Wild Universe, Richard Lobinske's Falling Into College series, Canadibrit's The Look Alike Series, and TAG's "Winter in Hell", "Nine Point Oh", and "When the Torrent of That Time Comes Pouring Back". In recent episodes of Legion of Lawndale Heroes, events seem to indicate that Sandi is taking a similar turn for the better. A more toned down version of Redeemed Sandi appears in Wouter's comic "A Tight situation" where her briefing Stacy about conducting "Serious research is of great value for any future fashion club" shows that she already is putting in some effort to make sure that the Fashion club she was president of would continue to help out others once she graduates. In that same story, after Stacy finishes her report Sandi applauds her fellow club member and asks Quinn and Tiffany to join in. In "Dinner at Tiffany's" Sandi at first dumps her date on Tiffany but is genuinely concerned and angry when finding out about Robert having taken her on a "Cheerleader date" (A kind of date where getting laid is the sole purpose.) and blushes furiously when Robert tells her on why it all went astray.

Many fics depict Sandi's personality flaws as the result of a troubled home life. Generally, such fics show Sandi's mother Linda as a hard-driving women with a take-no-prisoners attitude who expects her daughter to live up to her example and Sandi's father as a henpecked nobody who bows to his wife's will in everything, including raising the children (though "Winter in Hell" had him not care about Sandi at all). In many cases, the Griffins are depicted as on the edge of divorce if not actually already divorced. Troubled Home Life Sandi is often portrayed sympathetically and sometimes becomes Redeemed Sandi, with the collapse of her parents' marriage being the experience that molds her.

Examples of Troubled Home Life Sandi that do not cross over into Redeemed Sandi include GTS, especially GTS #4: Closets Are for Hang-ups, Heartbeat in Iambic by Dennis, and Moving the Goalposts by Kristen Bealer. 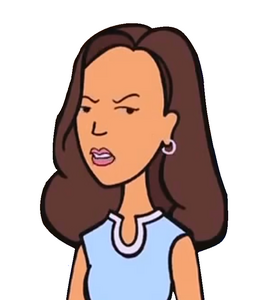 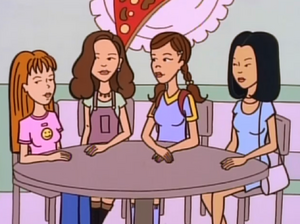