Sandiramon is one of the 12 Digimon Devas and an antagonist in Digimon Tamers. He resembles a giant white snake with purple armor on his head. He appeared in one-shot in the episode "Snakes, Trains, and Digimon". He is the second Deva to appear and the second to be destroyed.

He was voiced by Lex Lang.

An Ultimate Digimon that looks like a giant snake and is one of the "Deva Digimo". A subordinate of the Four Holy Beasts member Zhuqiaomon, he is the most cunning and cruel of the Devas. He hates battles that end in an instant, instead preferring to kill his opponents by injuring them slowly. He usually lives deep underground, and he can skillfully move through the Earth. During combat, he is able to project his "Bǎo Kuí" halberd from his mouth, and because it is so lightweight, he is able to bind his tail around it and brandish it dexterously. Although the halberd is incredibly sharp, it deletes itself as soon as it slashes the opponent once, but so long as Sandiramon has enough energy left, he can produce countless duplicates of the most dangerous and destructive weapon. His special attack is "Krishńa", which allows him to wriggle his giant body in order to powerfully spit out a halberd.

Sandiramon bio-emerges into the Real World under a subway where he attacked Rika and Renamon, but the snake’s armor was too strong. Then she Digivolved into Kyubimon, and she and Rika went after Sandiramon in pursuit as he made his way through the subway to attack a train. Meanwhile, Henry and Terriermon got off a subway train when suddenly, Sandiramon arrived and destroyed the train with his powerful screech. Then Henry Digivolved Terriermon to Gargomon and joined Rika and Kyubimon. When Guilmon and Takato finally arrived on the scene, with Guilmon digivolving to Growlmon, they took down Sandiramon with a combined attack, Growlmon striking the finishing blow with Pyro Blaster. As he lay wounded, still laughing, Sandiramon reveals that he is one of the 12 Devas sent by the Digimon Sovereign, he warned the Tamers that the other 10 Devas will destroy them all before dying. 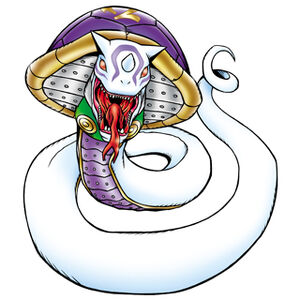