Chief of the Land of Nod

To have Jill Petterson trapped in her own "fairytale" forever (failed).

The Sandman is a magical being that puts people to sleep and the main antagonist of the Season 3 episode "The Tale of the Final Wish" of the Are You Afraid of the Dark? children's horror series.

He was portrayed by Bobcat Goldthwait, who voiced Pain in the animated Disney film Hercules.

He decided to grant the wish of Jill Petterson, a 13-year old girl who was still into fairy tales. He had put her friends and family into a deep slumber and trapped her within his mystical realm of dreams known as the Land of Nod where she encounters him and finally recognizes him as the character from the fairytale she once read about. Jill realizes the hard way that her wish had not turned out the way she expected. She wished to go home, but the Sandman said the tale had been written already and could never be changed.

Jill threatened to smash his magic hourglass. Before the Sandman could put her to sleep as well, Jill smashed the hourglass, breaking the spell which undo her wish and reverting things to normal.

However, at the end, the magic fairy tale book is shown to be open and we hear the Sandman telling us that the nightmare would not be over yet, revealing that Jill's still trapped in a story. 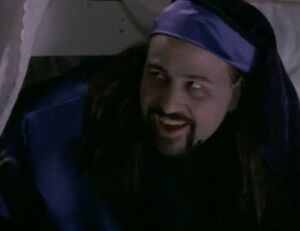 "Welcome to your fairytale! Hahahahaha!"
Add a photo to this gallery

Retrieved from "https://villains.fandom.com/wiki/Sandman_(Are_You_Afraid_of_the_Dark%3F)?oldid=3781039"
Community content is available under CC-BY-SA unless otherwise noted.