The Sandman is a supervillain in the Spider-Man comics.

In a freak radioactive explosion, Flint Marko's DNA was transformed to match the the chemical composition of small rocks and minerals. He can control every particle of his body, and can form his limbs into weapons, pick locks with his finger, shape-shift into different beings, or even gather more sand onto himself to become a giant. He is nearly indestructible, making him a formidable opponent who cannot be beaten by sheer strength. Sandman joined the group of supervillains known as the Sinister Six to attack Spider-Man.

Later in his career, Sandman reformed and gave up his criminal activities, even joining the Avengers hero group. He continued to go back and forth between supervillain and superhero, making him a very interesting and untrustworthy character.

Sandman served as one of the secondary antagonists of Enter Electro. William Baker worked for Electro and his allies.

After the Eddie Brock and the symbiote, Flint Marko is the secondary antagonist in Spider-Man 3. Years before the film's events, Marko's young daughter, Penny, became terminally ill, and he turned to bank robbing to get the money for treatment. During an escape with his partner, Dennis Carradine, Marko shot and killed Peter Parker's uncle Ben while trying to take his car, but Carradine abandoned Marko, and the latter was taken to prison.

When Marko finally broke out, he continued trying steal the money Penny needed, but the NYPD was onto him. During a chase, he accidentally fell into a large particle accelerator. Once the large mixers started to spin, there was no way out. Marko's body gradually began to disintegrate, and settled along with the millions of sand particles in the pit. He was transformed into living sand, the Sandman, and then went on a rampage, furious at what had happened to him. After a few run-ins with Spider-Man, he teamed up with Venom to destroy him. After the battle, Sandman revealed to Spider-Man what really happened the night Uncle Ben died: Marko had tried to talk Ben into giving him his car peacefully, and seeing that he was afraid, Ben told Marko to just put the gun down and go home. Marko was about to agree, but Carradine bumped into him, and Marko shot Ben by accident.

Sandman admitted that he did not want this violence for a life, he only wanted to save Penny, and that he was sorry about Uncle Ben's death. Spider-Man forgave him, and Sandman blew away into the wind. Sandman was portrayed by Academy Award nominee actor Thomas Haden Church.

Sandman makes an appears in the Regular Universe in Spider-Man Shattered Dimensions. He is one of the villains that acquired a shard of the Tablet of Order and Chaos. 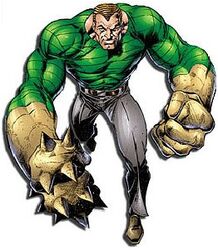 Sandman in The Spectacular Spider-Man 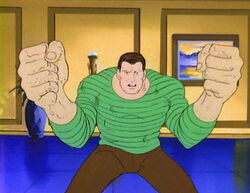 Sandman in Spider-Man and His Amazing Friends 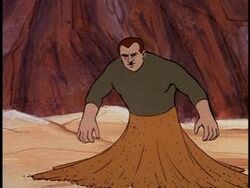 Sandman in Spider-Man: Friend or Foe 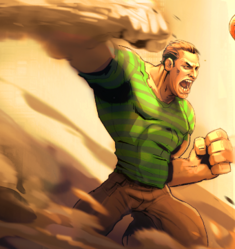 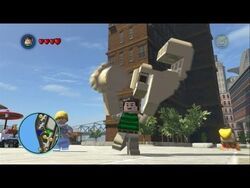 Sandman from Lego Marvel Superheroes
Add a photo to this gallery

Retrieved from "https://villains.fandom.com/wiki/Sandman_(Marvel)?oldid=2468658"
Community content is available under CC-BY-SA unless otherwise noted.