NOTE: This article is about the incarnation of Sandman from the Marvel Cinematic Universe film series. The mainstream version can be found here: Sandman.

Sandman is a major antagonist in the 2019 Marvel film Spider-Man: Far From Home. He is one of the Elementals whose element is earh, though it later turns out that he's just an android creation alongside the other Elementals built by Mysterio in the latter's true plot to make himself look like a hero to the public.

Along with the other Elementals (Hydro-Man, Molten Man, Cyclone and the Elemental Fusion), Sandman was created by Mysterio as an android (built by William Ginter Riva) as part of Mysterio's true plot to cement himself as a hero to the public and become the next "Iron Man" due to being fired from Stark Industries for his uncanny behavior.

Following the deaths of Iron Man, Thanos, and the Black Order in 2023, Mysterio sets out Sandman to attack the Mexican city of Ixtenco, bringing the attention of Nick Fury and Maria Hill (who are actually Talos and his wife Soren in disguise). As Talos and Soren investigate the ruins of the village, Sandman appeared behind them, intending to kill them both. However, Mysterio comes by 'to the rescue' and seemingly destroys Sandman. Mysterio later claimed to Talos and Soren that he has come from an alternative universe, fighting against the Elementals, prompting Talos to recruit Peter Parker to the investigation.

Eventually, Talos, Soren and Peter soon learned about Mysterio's true plot and that Sandman and the other Elementals were just androids being used as part of the plot, much to their outrage. 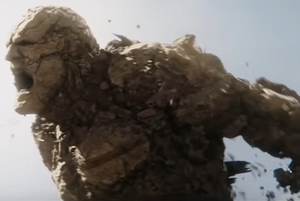 Retrieved from "https://villains.fandom.com/wiki/Sandman_(Marvel_Cinematic_Universe)?oldid=3543300"
Community content is available under CC-BY-SA unless otherwise noted.