William Baker, better known as Flint Marko or Sandman, is an antagonist from the 2010 Marvel video game Spider-Man: Shattered Dimensions. He is a criminal that steals a Fragment of the Tablet of Order and Chaos. He is from the Amazing Universe.

He was voiced by the late Dimitri Diatchenko.

Once nothing more than a petty criminal, William Baker, under the alias Flint Marko, broke out of jail and happened upon a nuclear test site. After coming into contact with irradiated sand, his body was transformed into living sand and rock, able to shapeshift his body, harden, or transform into sandstorms. Sandman soon became enemies with Spider-Man, who frequently stops him in his criminal activities.

Spider-Man tracks Sandman to a large area, where Sandman, as a whirling sand tornado, is sucking up the platforms. Spider-Man swings between them and fights off sand minions, eventually making it to a water tower that he dumps on Sandman, causing him to flee into a Roxxon Energy Corporation mine. Spider-Man gives chase, fighting off more sand monsters, until Sandman transforms into a giant and attacks. Using crates of water barrels, Spider-Man is able to soak individual parts of Sandman and do damage by taking advantage of missed attacks. Sandman then starts spitting projectiles, though Spider-Man avoids them and fights Sandman off. Spider-Man chases Sandman deeper into the mine and back outside, where he navigates another sand tornado and minions to drop another couple of water towers on Sandman.

The fight returns to the mine, where Spider-Man has to save a miner from the sand monsters. The miner offers to help by drilling a path, and Spider-Man has to protect the drill from the sand monsters. After the path is opened, Sandman chases Spider-Man in the form of a wave of sand, chasing him back outside. He reveals that, with the power of the Fragment, he has spread his consciousness to all the sand in the area. However, this has taken a serious toll on his mind, resulting in his multiple forms having different states of mind and fragmental consciousness, as well as slightly different personalities. Sandman transforms into a massive sand tornado with Spider-Man at the center, where he grows several faces and begins spitting projectiles and shapeshifting weapons around Spider-Man. His true face is the one that had his original personality, with the remorseful and the more violent faces being decoys. Using water barrels in the debris, Spider-Man temporarily soaks the authentic one's face to do damage.

After you do enough damage to his real face, Sandman reverts to his original humanoid form, only to collapse into a pile of sand, and Spider-Man is able to recover the Fragment.

Sandman is brutish and arrogant, believing highly in his own strength and ignoring dangers. He seeks to destroy Spider-Man at any cost, and is willing to cause major destruction to do so. However, as he spreads his consciousness thinner and thinner, his different forms take on other personalities, such as one being even more violent and one being remorseful. 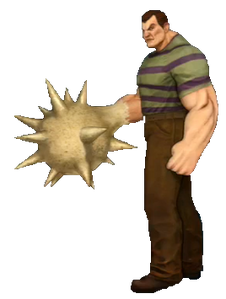 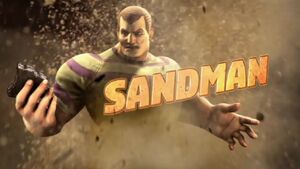 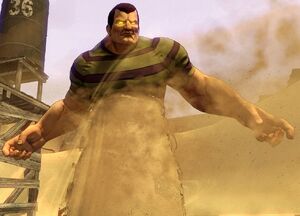 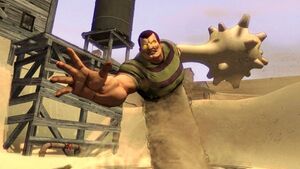 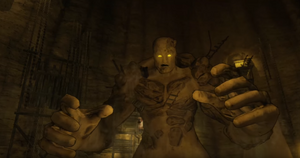 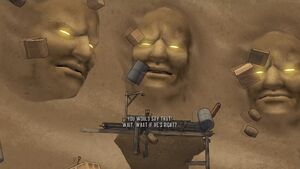 Sandman's final form, with two of his clones. 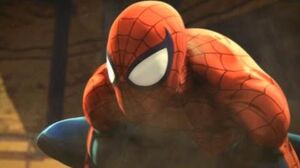